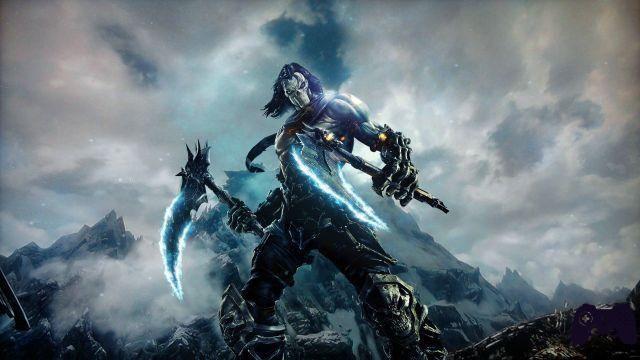 Darksiders II has finally arrived on our shelves, for PS3, PC and X360, bringing with it great innovations to the brand, novelties that make this game a little more RPG and a little less repetitive than the first chapter.

Speaking of news, the first big change is in the absolute protagonist: the mammoth and slow War is replaced by the faster brother Death, in an adventure set at the same time as the first Darksiders.

Death's goal is soon said, to redeem the name of his brother imprisoned by the Arso Consiglio, bringing back to life the whole of humanity and proving to all the innocence of Guerra.

To complete his mission, Death will have to find the Tree of Life and discover its secrets but this, we assure you, is only the beginning of the new adventure by Vigil Games. Accompanying Death on his long journey we will have Desperation, a noble steed that will allow us to move faster in the vast open world of the game (as well as Ruin carrying War in the first chapter) and Dust, crow who will show us the way to go in the intricate dungeons , and can be summoned at any time.

The Role of Death

The second big news of Darksiders II is certainly the accentuation of the RPG part: if in the first chapter the only thing that could gain experience were the three main weapons of War, here it will be our knight to get points directly and, consequently, at each level increase (up to a maximum of 30) our Death will be strengthened, becoming more and more lethal, and will gain useful skill points which, spent in the appropriate menu, will allow the player to learn secret techniques with which to destroy enemies changed by Corruption.

Even the enemy monsters will have their level (viewable together with the life bar, targeting the unfortunate) and obviously if this is too high compared to the level of Death, for the Knight it will be better to run for cover and try again with a little more ' experience on the shoulders.

Another strong role-playing component is certainly the ability to completely customize Death's armor. By collecting items left by enemies or contained in chests, or simply buying them from merchants, it will be up to the player to decide which aspect of the Knight to upgrade, depending on his personal taste.

Same goes for weapons. In addition to the two Sickles, Death will be able to choose one of the other eight warrior classes as a secondary weapon: it will be up to the player to decide between a powerful but slow attack (thus falling back on Axes and Hammers) or faster but less effective (therefore choosing Blades for the forearms or Bucklers that increase the power of the punches); obviously each weapon has its own unique set of combos, for an ever-changing gaming experience that adapts to every hack 'n' slash player.

Also, if you are lucky enough, the monsters will drop Possessed Weapons: the peculiarity of these war tools is the possibility of being empowered by literally eating the other items in our inventory; to each level increase of the weapon, we will be able to add a bonus belonging to the last sacrificed object, increasing its effects on our possessed object.

A final note on the Death inventory: if the player still has the data of the first Darksiders, he will be able to receive special items in the Forge Lands, a sort of "loyalty rewards" that recall War tools and armor; these items will be useful in the early hours of the adventure but will soon be replaced by stronger and more lethal weapons that will be found during our journey.

One of the flaws of the first Darksiders was the intricacy of the parry-counterattack system: if the player pressed the R1 button (RB on Xbox 360, ed) slightly early or late, the parade did not go to sign and Guerra was reduced to a colander. Vigil Games has therefore decided to completely abolish the possibility of parrying blows: in Darksiders II we will have to limit ourselves to dodging with the right timing (and later in the game also counterattack, if the elusive move is performed at the exact moment), in order to then rush out quickly. on the sad unfortunate, destroying him with various and rapid combos - which can also be purchased from the appropriate instructors - which will expand the repertoire of Death and his murderous techniques. The dodge system introduced is therefore much more comfortable and intuitive, although against some enemies, and in certain areas, we will risk getting stuck against a wall or a column but do not despair, an escape route for the Nephelim will practically always be there.

This novelty blends into a gameplay that, even more so in this round, takes the best of the mechanics of other well-known titles to create an unprecedented cocktail action. As in the first chapter, even in Darksiders II the Vigil Games team has included various gameplay fished a little here and a little there: from the race on the walls to the Prince of Persia, up to the puzzles to The Legend of Zelda, passing through a boss who seems to be taken over by Shadow of the Colossus. A mix of game-play that, however, is intriguing and homogeneous and leads the player to explore every single portion of the entire map, often retracing their steps to recover hidden chests or to find new paths to secret areas (difficult to reach without a certain object , as happened in the first chapter).

How beautiful is Death ...

…but not only. In fact, underlining as the title of this paragraph, the Knight is not the only one well characterized and with a design to make all comic fans drool: every supporting actor and every monster present in Darksiders II comes from the skilled pencils of Joe Madureira, designer successful and highly talented, who had already taken care of the design of the first chapter.

The music sector also manages to give the right atmosphere to the artist's creations, teleporting us to the side of Death in his travels between worlds.

Unfortunately, if the design is flawless, graphically Darksiders II suffers from some slight drop in frames, especially when the action is excited and there are multiple enemies on the screen (moreover in some cases even the camera gets into tantrums), defect on the which is easy to overlook, as the player will be more focused on staying alive rather than looking at the graphics.

The vastness of the universe-Darksiders

Darksiders II is vast, very vast, almost immense, both for the places to explore, and for the sub-quests proposed (from collectible classics to very strong secret bosses, passing through the fearsome Trial by Fire), the longevity of the title is therefore not even remotely comparable to that of the first chapter. In addition, THQ has guaranteed numerous DLCs that will accompany Darksiders II for most of its "life".

Furthermore, the possibility of teleporting us to any place already visited, thanks to Fast Moving, also returns in Darksiders II, thus speeding up travel times, even if it is a real shame not to enjoy the different (both in the colors and in the sensations given) landscapes a horse of redemption. Landscapes that, in addition, still remain enjoyable despite the numerous but almost instant uploads between one area and another, which allow the absence of many of the graphic bugs that militated in the War adventure.

Don't be scared, no multiplayer arenas, no death-matches or anything like that. In Darksiders II the online component is limited to comparing the statistics with our friends and introducing the Tome of the Snake, which will be used to send to our friends the weapons or pieces of armor that we no longer use and which could be useful to enhance their Knight.

A useful and innovative gimmick that will allow us to help our poorest and most clumsy friends, as long as they are of a high enough level to be able to use the objects received.

With the three initial difficulties (plus an additional one), the possibility of starting a "new game +" and the many things to do, combined with high longevity (over 25 hours), dungeons and immense maps to explore, make Darksiders II a better and more complete chapter than the first. Thanks to all this, the adventure of Death will make happy both lovers of action games and those looking for a complete, varied and above all customizable attack system according to their tastes.

The wait for the advent of the third Nephelim is still long, but Death will keep us company for a long time.

Verdict 8.5 / 10 MAD Smashes! Comment I was quite burned by the numerous bugs present in the first Darksiders, although the screaming storyline kept me glued to the game until the end; fortunately Darksiders II presents itself without the heavy defects of the first and, on the contrary, it improves itself with an RPG component that gives an extra boost to the entire chapter. Madureira's design helps player conquest and enables one of the greatest gaming experiences of this generation. Pros and cons ✓ Fluid and intuitive gameplay
✓ Amazing design
✓ High longevity
✓ Online system to take inspiration from x Some frame drop
x Unpleasant camera in certain sections
Do you want to be a video game expert and know all the tricks, guides and reviews for your video games ? Holygamerz.com is a group of video game fanatics who want to inform you about the best tricks, guides and tips. We offer you the best information to be a reference in gaming, so here you can find guides, tricks, secrets and tips so you can enjoy your games to the fullest. Are you ready to get all the achievements of that game that you resist so much? Enter now and enjoy your favorite video game to the fullest!
Special The novelties of DualSense: touch an idea of ​​the future with your own hands ❯

The Persistence | Review, the second life of the sci-fi roguelike