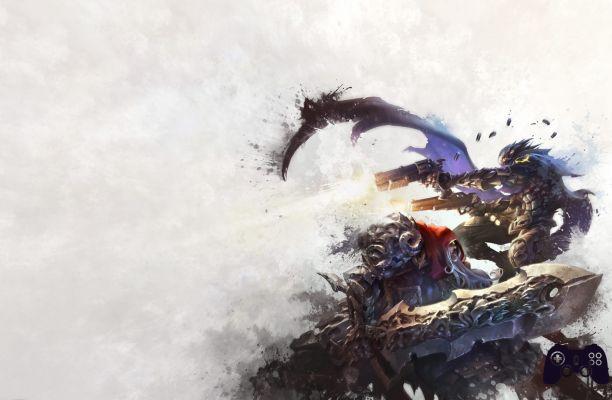 E3 2019 was a fairly subdued edition. Between reconfirmations and wild leaks, the only title that managed to attract the attention of the entire public was Cyberpunk 2077, with that now legendary cameo by Keanu Reeves. A small and timid surprise, however, came to the eyes of isometric hack and slash lovers: Darksiders Genesis. THQ Nordic, in defiance of the hopes of fans of the saga who yearned for a fourth chapter, showed one spin-off of origins that winked at the lovers of diablolike. Visual isometric, hordes of demons to slaughter, possibility of approach to ranged combat: the ingredients were all there. Our tried, however, at Lucca Comics and Games 2019 at the Esport Palace left us a bit perplexed. The proven mechanics they were in effect the same as the classic series, until now never integrated with a fixed isometric camera. Pad in hand (and not surprisingly I mentioned it), finally the moment of truth has arrived. Let's find out in this new review of Darksiders Genesis if the experiment of Joe Madureira (author of the original saga) has managed to start a new subgenre.

The Genesis
To maintain balance, the Arso Consiglio ordered the four Horsemen of the Apocalypse to exterminate their own race. The Nephilim (beings generated by the union of angels and demons), were found guilty of putting mankind at risk because of their power.

The first impact of the game was brutal as the heavy blows of War. We find ourselves immediately immersed in the battle during the siege of the fortress of the demon Samael. Sent byArso Council to investigate these new riots, War e Conflict they must make their way through the demonic hordes until they reach the lord of the fortress. From the early stages of the game, one thing becomes immediately clear: it is not a mouse and keyboard game. Darksiders Genesis incorporates the same combat mechanics as its predecessors and foundational turn out combinations of light and heavy attacks, seasoned with a massive use of quick dodge. Also the fatality the dying demon has been kept, giving us bloody animations and juicy extra life.


But if Guerra with his brutality and his worry gives us the welcome back to the famous THQ saga, it is Conflict that turns out to be the real novelty item. During the first game sessions one is led to believe that Guerra's brother is superfluous; in hand-to-hand clashes the latter's heavy and area attacks are always the best strategy. But as you go on you begin to to appreciate more and more the talkative gunslinger. Conflict is considerably more agile of Guerra and allows you to use the double quick release, very useful in the one-on-one battle and in the sections of the map where the mount not available. Furthermore, despite the aiming system is not the best, the two guns Mercy and Redemption do their dirty work when the approach from afar is more congenial.

But it is theinteraction between the two Knights the real strength of Darksiders Genesis, an aspect that most impressed us during the test for this review. The relationship between the two brothers is really fun, both in battle and in the cutscenes. War as in combat is tough and stoic, while Conflict is a fool with an easy joke. Power them change during a fight it generates truly devastating combinations and is sometimes the only way to survive. In the clashes against the Boss level in fact it is necessary to use the skills of both characters. Taking advantage of theagility of Conflict, you can easily dodge the powerful attacks of the latter and the devastating blows of Divoracaos allow you to take them down quickly.


Being able to switch War and Conflict during a fight generates truly devastating combinations and is sometimes the only way to survive.

Isometric and platform room: a wedding that doesn't have to be done

If in the fighting the isometric room allows us to manage the battlefield more strategic, alternating the skills of War and Conflict at will, unfortunately does not help us at all in phase platformer e solving puzzles. The two classic Darksiders mechanics, which together with combat offer a truly varied gameplay, badly marry with the fixed camera, so as to make some sequences really frustrating.

Frustration not derived so much from the difficulty of the game itself, which in general offers one well balanced challenge. What is nervous is the inability to focus attention on a specific point on the map. During the platforming sequences, some of them really al heart-pounding, it is difficult to calculate the distances between one grip and another, precisely because of the fixed position of the chamber. Even in the stages of solving the puzzles, not being able to orient the camera at will is not a little nervous, forcing us to physically move to observe points on the game map really close to our initial position.


In these moments, unfortunately, during the Darksiders Genesis test for this review, we came to think several times that the presence of an isometric camera was more of a convenient solution than a precise stylistic choice. Two of the three core mechanics of Darksiders Genesis clash strongly with it while in combat it is not being exploited as it should. In diablolike a bird's-eye view allows total control of the battlefield. Thanks to remote techniques, traps and allies it is possible to have a very approach strategic to combat. In Darksiders Genesis, only Conflict guns benefit from this aerial view. Chiara is therefore the will of Airship Syndicate, the game's development team: not an isometric Darksiders but an isometric camera in Darksiders. 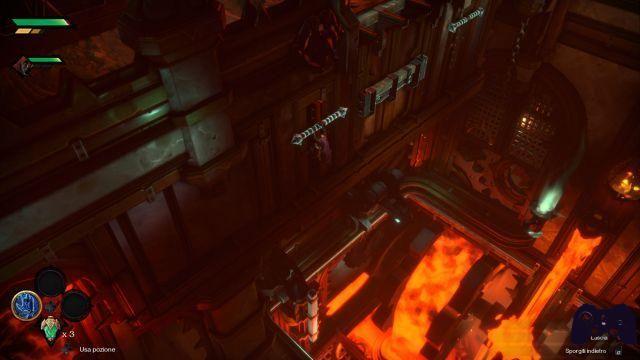 Hey you damn demon, give me your Core! 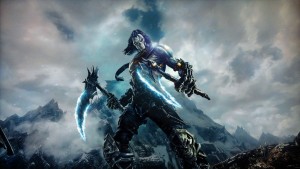 To decree the final divorce between the THQ Nordic title and the beloved Blizzard saga, complete with separation of assets, is the peculiar growth system of the characters. Initially unclear, it begins to assimilate after a few hours of play, resulting in a lot distant from the classic systems we are used to. Among the myriad of multicolored orbs that enemies release after being defeated, there is one most important of all: the Nuclei Creatures. These orbs bring with them very interesting passive abilities and upgrades and can be placed inside a skill tree. There are two types of Nuclei Creatures: i secondary purple in color, released by common enemies and primary gold colored, obtainable from defeated bosses.

Each creature core grants benefits to stats or skills in both Conflict and War at the same time. The secondary nuclei are of three types: Attack, Collar e Health and if positioned in the appropriate joints, they greatly increase the ability connected to their type. This strange growing system is not entirely convincing, offering a level of customization not very high, considering that the Core board is the same for both War and Conflict. But the various come to help secondary powers of the two characters, completely separate from the skill tree and unique to each brother. Conflict for example can boast of a varied arsenal of bullets, ranging from classic buckshot to devastating laser beams. Guerra, for its part, has several at its disposal heavy attacks for his Divoracaos, some useful in the fray, others suitable for the giant bosses at the end of the level. 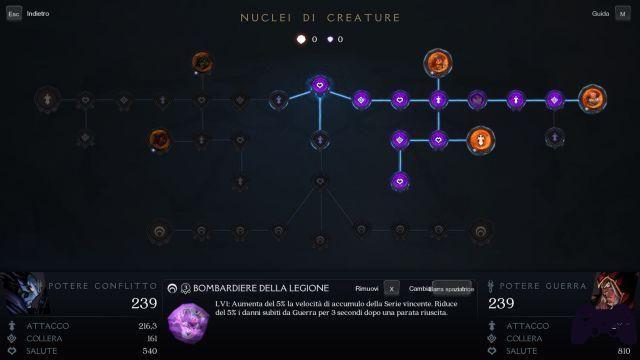 A game for all budgets

To conclude this review, Darksiders Genesis is on balance a game very particular and in a sense innovative in the hack and slash landscape. The experiment of adapting the isometric camera to the classic mechanics of the series was not completely successful, but this does not make the game boring or frustrating. There verticality it is a difficult element to manage in the presence of a fixed chamber. But thanks to really successful platform sequences it's a environmental grinding, Darksiders Genesis still manages to offer truly exciting gaming moments. There is also nothing to report on the combat phases. Although they do not offer a high level of challenge, thanks to the two brothers of the Apocalypse clashes are really excited e always different.

A little disappointment on the technical side unfortunately: the graphics it is quite dated and the game features some little bugs environmental and in the combat system. It is not uncommon to get stuck between a rock and a pillar after taking a quick shot, and it is not clear what the maximum distance limit is for Conflict guns to be effective. All this, however, is soon forgiven given the price with which the security is sold: 29.99 € for the version PC, 40.98 € for the consul. If you add the multiplayer in co-op, Darksiders Genesis offers a valuable and complete videogame experience at a very fair price.

Verdict 7.5 / 10 Conflict: the brother we all want! Comment Darksiders Genesis is an experiment that only the creator of the saga Joe Madureira could attempt. Keeping the classic mechanics so loved by fans in the presence of a fixed camera was certainly not a simple operation, but the result, although not excellent, is quite satisfactory. Genesis entertains and amuses despite a few bugs here and there and the presence of the multiplayer co-op helps the longevity of the title, which is around 15 hours. At such a price you couldn't ask for more. Pros and cons ✓ Fun combat system
✓ Excellent relationship between conflict and war
✓ Satisfying platforming and puzzles x Badly integrated isometric camera
x Presence of gameplay bugs
x Slightly dated graphics
Do you want to be a video game expert and know all the tricks, guides and reviews for your video games ? Holygamerz.com is a group of video game fanatics who want to inform you about the best tricks, guides and tips. We offer you the best information to be a reference in gaming, so here you can find guides, tricks, secrets and tips so you can enjoy your games to the fullest. Are you ready to get all the achievements of that game that you resist so much? Enter now and enjoy your favorite video game to the fullest!
Shadow of the Beast preview ❯

WRC 9 | Review of the PlayStation 5 version

Beyond Blue | Review, a sea with few emotions