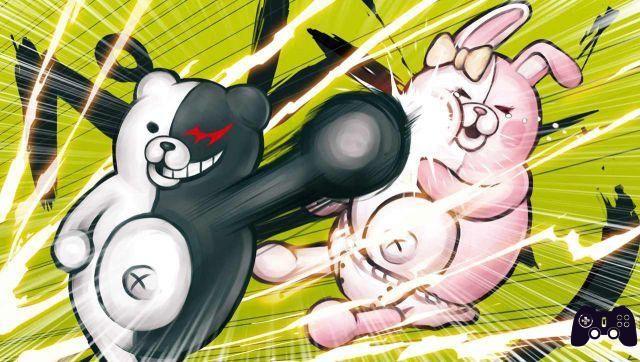 Last February, NIS America brought up PSVita Westerners the expected Danganronpa: Trigger Happy Havoc, visual novel conceived by the guys of Spike Chunsoft that in Japanese soil was released in 2010 on PSP.
The title struck us for the extreme characterization of the characters, at the same time causing criticism on how extreme their attitudes were and on how much they reflected the stereotypes of Japanese animation, without grasping the fact that all this was wanted by Spike Chunsoft itself.
The next 5 September will arrive in stores Danganronpa 2: Goodbye Despair, unreleased sequel in the West released for PSP in 2012 and re-released on PSVita last year, within Danganronpa 1-2 Reload (obviously only on Japanese territory), will Spike Chunsoft be able to correct the errors in the first one and provide us with a new graphic adventure worthy of the name?

Danganronpa 2 begins exactly like its predecessor: Hajime Hinata has just been admitted to Hope's Peak Academy when he collapses and finds himself in a room with fifteen other people.
Here he gets acquainted with use me, a completely white rag rabbit, who, like a teacher on a school trip, reveals to the 16 boys that he had taken them without their knowledge to a desert island: Jabberwock Island.
To leave the island they will simply have to make friends with each other and live in peace, collecting the Hope's Fragments (fragments of Hope), without causing arguments and unnecessary violence.
The island is equipped with a motel, restaurant, supermarket and any other building he can think of, food and basic necessities in abundance, a perfect tropical paradise: unfortunately, the idyll is destined to shatter when a dark black cloud the sky, one of the surveillance screens automatically turns on and reveals Monokuma, the treacherous stuffed bear from the first chapter. 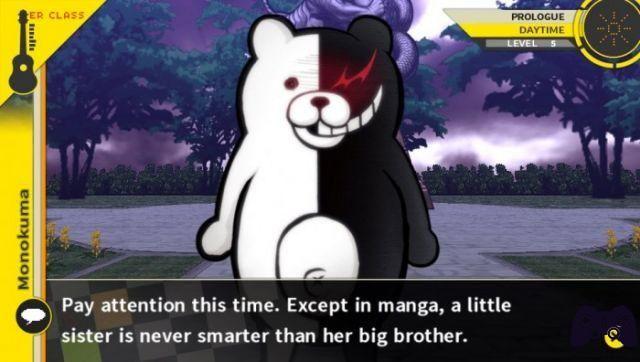 Monokuma first turns poor Usami into Monomi, depriving her of her powers, then threatens the 16 boys: if they want to leave the island, they will have to kill each other.
In an escalation of mysteries, murders and trials, the plot will unfold more and more revealing all the secrets surrounding Jabberwock Island, Monokuma, Monomi, and the protagonists themselves.

Danganronpa 2 cannot be enjoyed without finishing the first chapter: Unfortunately in this review we cannot talk much about the plot, but we assure you that after a very similar start to the predecessor, the story will take a monstrous surge and will keep you glued to the screen for its entire duration, until the unexpected conclusion.
Many quotes from anime, comics and movies, and several jokes that literally destroy and pulverize the fourth wall, citing several times the first Danganrompa or even the intermission chapter to be released this autumn in Japan.
In addition to the compelling plot, even in this sequel the strong point remains the extreme characterization of the characters: although some are much weaker than the previous cast, we find Ultimate students (the best in their field) truly studied at 360 °.
Characters of the likes of Nagito Komaeda (Ultimate Lucky Student as Makoto in the first) able to leave the player astonished thanks to the dialogues, or Gundham Tanaka (Ultimate Breeder) which represents the absolute stereotype of the spirit summoner, up to the Ultimate Gamer, Chiaki Nanami, sweet girl passionate about video games, who brings all the popular beliefs about the players on the screen, deliberately exaggerated.
The whole group is studied in detail to show different personalities, and different ways of reacting, both to mourning and to the numerous assassination incentives present also in this second chapter.

One of the main flaws of the first Danganronpa was certainly the extreme ease in recognizing the culprit or the outcome of the trial well before entering the courtroom: Spike Chunsoft managed to polish this aspect by offering less predictable twists and accompanying the player in the guilty's intuition only during the debates, this time it will really seem to be in one of the sixteen places, alongside the protagonists fighting for their lives.

Danganronpa 2 is mainly a visual novel, as in the predecessor, you will spend most of the time reading dialogues and thoughts of Hinata, who turns out to be more talkative than Makoto.
When you are not engaged in discussions or plot events, you can move almost freely around Jabberwock Island, being the largest play area in Hope's Academy, the camera switches to a third person (where you can choose to move Hinata left or right) to the classic first when you enter the buildings, where you can analyze the surrounding environment or talk to the other kids during the "Free time" (and get to know them by obtaining the aforementioned Hope's Fragments); Hope's Fragmente can be used to buy special abilities to equip during Class Trials: if the relationship with a certain character is increased to the maximum (6 fragments) you will get a unique ability stronger than those for sale. 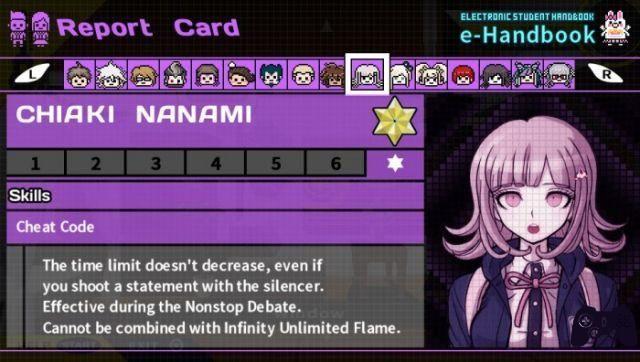 Spike Chunsoft has also included a level system for Hinata: each step, interaction with things or dialogue, will provide the young protagonist with experience points, each level increase corresponds to an increase in the maximum life points during the Class Trials.
Two nice additions to the exploratory gameplay are the hidden Monokuma (there are five per island) and the E-pet, a virtual tamagotchi that will grow according to the steps taken in the game.
The Monocoins with which to take gifts for other kids, or extras such as audio and concept art, instead will be given only and exclusively as a prize after the class trials, when the Monokuma will be found and when the E-pet will become big enough.

After the inevitable killings, and after having investigated in the exploratory phase, the group of boys will find themselves in a court area very similar to that of the first chapter.
The rule is only one: if they succeed in identifying the culprit, only the latter will be executed, otherwise all the participants except the murderer will lose their lives.
In the first Danganronpa, whatever the difficulty, the only minigame to put a strain on the player was the Bullet Time Battle, a minigame in which you had to press the buttons in time to silence our interlocutor; in Danganronpa 2 the difficulty of the minigames is much better calibrated, putting the player to the test (especially the one who doesn't know English well, but we'll get to that later).
I Non-Stop Debate have been improved: in addition to being able to use the Truth Bullets (which is nothing more than the evidence found during the investigations) to counter any lies told by comrades, in Danganrompa 2 you can choose whether to agree with a statement just made.
Also 'Hangman's Gambit has been revolutionized: it will be necessary to join two identical letters while they scroll on the screen, and select them in order to compose the required word, if two different letters collide they will explode causing damage to Hinata's life bar.

The aforementioned Bullet Time Battle have become i Panic Time Battle, and if possible, they have become even more difficult: relying on the player's sense of rhythm, it will be necessary to destroy the interlocutor's "psychic" shields, bringing him to collapse with a final sentence to be composed within the time limit.
Il Closing Argument, where it will be necessary to insert images in the tables of a manga to reconstruct the murder, it has instead been facilitated: now a suggestion on what to insert appears in each empty cartoon.
Spike Chunsoft also added two new minigames: Logic Dive, a surf ride in Hinata's mind, avoiding obstacles and correctly answering questions on the road; is Rebuttal Showdown, where it will be necessary to "cut" the opponent's statements by continuing to reply thanks to the Truth Swords (a variant of bullets). 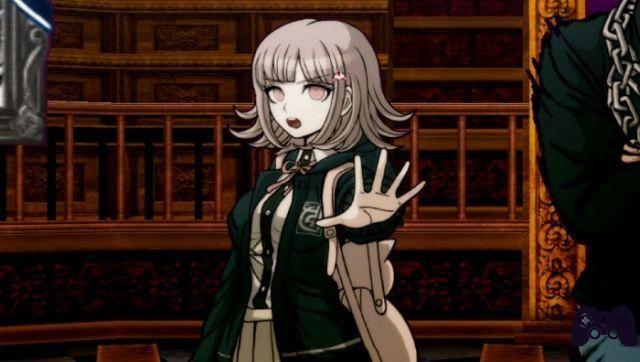 Each of these minigames can be tackled both with the buttons and simply through the PSVita touch controls, even if the first alternative is infinitely more comfortable.
Be aware that on some occasions (Hangman's Gambit and Panic Time Battle) a thorough knowledge of English is required, especially if you try to get a perfect score, so Danganronpa 2 is mainly recommended for those who know the Anglo-Saxon language well.

The graphic aspect of Danganronpa 2 is practically identical to that of the first: the characters are mere 2D silhouettes with different animations, while the 3D backgrounds will be composed upon our arrival.
As in the previous episode, to benefit from the transposition on PSVita are mainly the 2D Sprites, the rest is only cleaner than the PSP version.

to benefit from the transposition on PSVita are the 2D Sprites

The dubbing of the title is again his strong point, and at the same time his weak one: if on the one hand the Japanese voices manage to give a further characterization to the characters, on the other the English ones, given the Japanese nature of the title, make them flat and dull; fortunately, you can choose to use the Japanese audio at the beginning of the game, not risking, even by mistake, to hear Western voices.
The soundtrack is entrusted again to Masafumi Takada, which does justice both to the songs of the previous episode, and to the unreleased ones that will surely be remembered for a long time, sitting next to the soundtrack of the last chapter in the brains of the players.
This successful mix of audio-video makes Danganronpa 2 comparable to the Japanese animated productions of recent years, managing to entertain as well as challenge the player to grapple with puzzles and Class Trials.

Verdict 9/10 Other than Island of the Famous Danganronpa Comment 2: Goodbye Despair is a successful sequel, which on many occasions even surpasses its predecessor. The maniacal characterization of the stereotypical protagonists to the extreme that made the first episode a success (and at the same time made him the protagonist of numerous controversies) is also repeated in the second cast, with a repertoire of quotes that manages to fish with both hands from anime , movies and video games. Spike Chunsoft's title is recommended to anyone who enjoyed the first episode and we're sure it won't disappoint you. Pros and cons ✓ Characters characterized maniacally
✓ Well thought out puzzles
✓ Flawless soundtrack x Some puzzles require a high knowledge of English
x English dubbing avoidable
Do you want to be a video game expert and know all the tricks, guides and reviews for your video games ? Holygamerz.com is a group of video game fanatics who want to inform you about the best tricks, guides and tips. We offer you the best information to be a reference in gaming, so here you can find guides, tricks, secrets and tips so you can enjoy your games to the fullest. Are you ready to get all the achievements of that game that you resist so much? Enter now and enjoy your favorite video game to the fullest!
Gunman Clive 2 review ❯

Stealth Inc Review: A Clone in the Dark