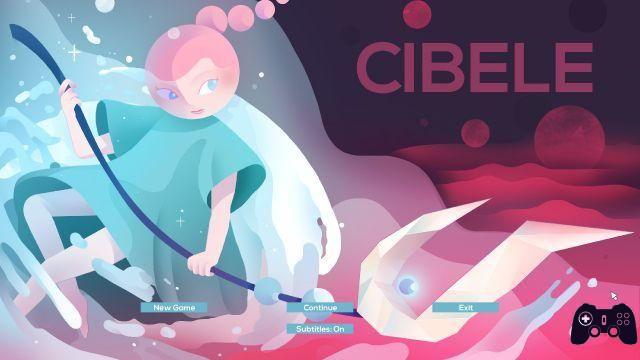 We have all gone through a period full of crises, doubts, uncertainties and loneliness. We have all been waiting for a particular moment in our life, a moment that, probably, would change it forever; and, of course, we have all lived the joys and sorrows of our first love, facing its difficulties with more or less vigor depending on the case. One thing is certain: Nina Freeman did this and more, and she survived her story and the weight of her memories in order to be able to tell them to the world. Cybele is his message: a strong, raw story that delves into the most intimate emotions of a young woman in love and slams them violently in the face of the player.

Developed by Star Maid Games, Cybele it is far from being a "game" in the narrowest sense of the term. Riding the wave of digital entertainment to take advantage of an interactive form of storytelling, the title of Nina Freeman is a short story in which the gameplay only serves as a side dish, exploiting extremely basic game mechanics which, if considered for the purposes of a evaluation, they would force anyone to throw Cybele in your virtual basket immediately after purchasing it.

The title of Star Maid Games is a "game" with strong narrative pretensions that forcefully tries to scream a message. Will Nina Freeman be able to prove herself up to the task?

Cybele is anything but a conventional title

Cybele it's anything but a conventional title. As already mentioned, the almost absent gameplay consists only in exploring Nina's computer in search of some interesting document, useful for understanding her personality and the way in which her interpersonal relationships develop. By tackling the theme of sexuality with extreme crudity, Cybele forces the player to immerse themselves in the role of Nina Freeman, whose story is actually nothing too elaborate: a girl with antisocial tendencies spends most of her time in her room, alone, playing "Valtameri" (from Finnish: " Oceano "), an MMORPG that, within Cybele, takes the place of Final Fantasy XI. The young Nina, in the course of her online games, gets closer and closer to a boy who is part of her "group", and the dialogues between the two characters become "hotter" with each telephone conversation or chat message. 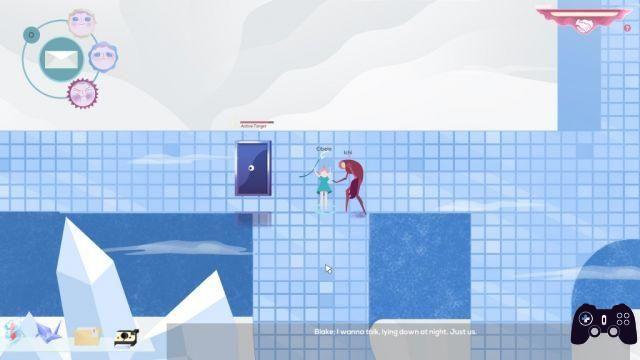 The technical aspect of Cybele, similarly to the gameplay, it is as if it did not exist: interspersing each of the three "Acts" with sequences filmed in Live-Action, the only cases in which the player finds himself face to face with a mere "graphic" appearance is inside by Valtameri, the fully illustrated fictional MMORPG that guarantees a different map for each Act, although the “gameplay” remains the same in each case. Overall, the graphics sector of Cybele it is particularly pleasant, both when you are on Nina's desktop (which obviously does not perform all the functions of a real operating system) and when you are inside Valtameri.


The title, in fact, is anything but pretentious in terms of hardware resources, simply because its purpose does not lie in guaranteeing gameplay with an intensive impact: the player, during the short game experience, will only have to examine documents on the desktop or face enemies on Valtameri (in which, however, it will be impossible to die) with a very simple "point-and-click" formula, simultaneously listening to the conversations between "Cibele" (Nina) and "Ichi" (Blake) and replying to messages chat of Nina's various friends.

The whole game focuses on the concept of "exploration", not so much "physical" as "psychological": Nina's computer will be more than enough to create an image of her personality, with oddly named poems and photos scattered around. for the PC desk. The dialogues and conversations between her and the various characters in the game will help to understand more and more of the young girl with the arrival of each single Act. 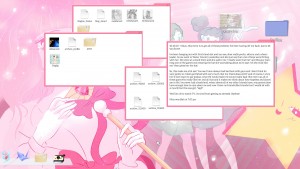 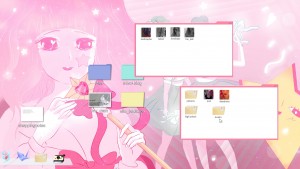 What is most striking, in Cybele, it is certainly his honesty in dealing with issues such as sexuality and the discomforts of a naive girl, still a beginner in everything related to love and, in a certain sense, even life itself. The title of Nina Freeman (who is also the protagonist of the game) is made extremely realistic by all the (real) photos that are shown during the three acts, and the Live-Action movies only introduce the player to the most intimate aspects of the girl's personality. Nevertheless, Cybele never ends in vulgarity: showing a pair of breasts (covered) or an explicit cleavage can be useful for the purposes of the narrative, but the story will always manage to stop "a little earlier", never relying on free pornography to impress the player . As already mentioned, the purpose of Cybele it is simply “telling a story”, but the title wisely demonstrates that a fan service maneuver is not necessary to make a plot more “true”, or even just more effective. 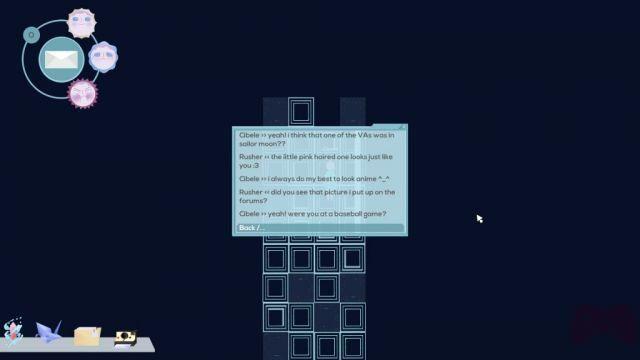 One of the most discussed jokes of the whole Cybele: "I always do my best to look anime ^ _ ^"

Nina is a novice girl, as have been / and everyone / and in the course of her life: she does not know what sex is, she does not know what it means to be in a relationship, and her love for Blake will involve her deeply from the very beginning. principle, when the young man will show a first interest in her. The freshness and hope of the young Nina, increasingly interested in the relationship with Blake, will lead her to make choices that could force more than one player to scream at the screen in an attempt to stop her; and, however, just like any human being blinded by love and dragged by events, those who play can only experience the story on their own skin, without any possibility of changing what happens on the screen. If a static nature of this kind, nowadays, may seem a serious lack in a current "visual" video game, there is no doubt that this choice of the developers (direct or indirect) contributes to the success of the same concept at the base of Cybele, based on an apparently banal and, at the same time, unfortunately real plot. 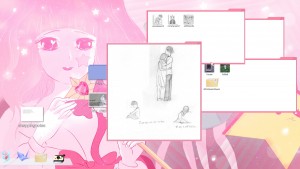 The dialogues themselves, apparently written by a "teenager", work precisely for their simplicity and their indisputable banality, able to catapult the older players back a few years and force them to relive a period of their life they would rather forget. And the story, with an effectively open ending, could leave an unpleasant aftertaste in the mouth of anyone who decides to (re) live it on their computer screen (or, better, on Nina's computer), pushing to the surface a sense of bitterness that might not abandon yourself throughout the day.

Waves of Memories and Insults

Cybele is not a game for everyone

Cybele it is not a "game" for everyone: with the criticism divided between positive reviews (with some reservations, especially on the ending) and strongly negative judgments, the two extremes largely depend on how much you are willing to get involved in the story, that the developers advise to live in one session. And, as strange as it may sound talking about a video game, love / hate for Cybele it basically depends on the player's most intimate personality: it is all too easy to judge Nina's work from the outside, but there will certainly be a few who, at the end of the story, will feel deeply shaken by having lived a memory again. 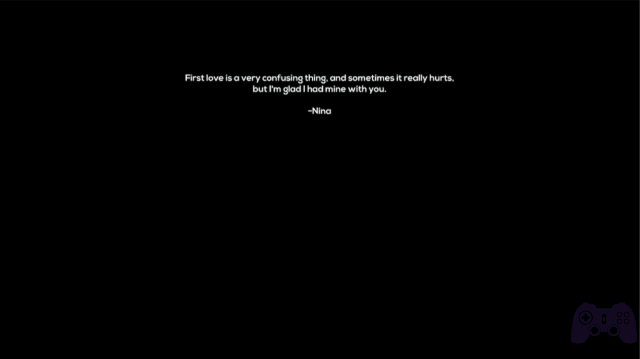 E Cybele it is nothing else: a memory that, albeit troubled, allows Nina Freeman to raise her young voice, effectively transmitting a strong message to anyone who believes they are "alone" against the joys and pains of her own memories.

Verdict Yes Teenage Simulator 2015 Comment Trying to lock Cybele within "classic" canons of evaluation would be an utter disrespect for the story of Nina Freeman. Cybele is by no means a "video game" in the most conventional sense of the term: it is a "playable story", in which the plot is pushed to the extreme as if the player were playing a film to be explored and discovered piece by piece. It is not possible to rate the visual and emotional experience guaranteed by a title like Cybele: the work of Star Maid Games is an "interactive memory" to be lived minute by minute, discovering Nina's story or some intimate personal experience. buried by time. Nina wanted nothing more than to tell her story to the world, putting her own face and her own photos into play: a choice that, in itself, is already worth all my respect. In other words: would you feel like giving someone else's life a vote? Pros and cons ✓ Based on a true story
✓ Realistic dialogues
✓ Convincing story
✓ Adequate soundtrack x Extremely short
x Gameplay and technical aspect almost completely absent
x Price too high for the overall experience
Do you want to be a video game expert and know all the tricks, guides and reviews for your video games ? Holygamerz.com is a group of video game fanatics who want to inform you about the best tricks, guides and tips. We offer you the best information to be a reference in gaming, so here you can find guides, tricks, secrets and tips so you can enjoy your games to the fullest. Are you ready to get all the achievements of that game that you resist so much? Enter now and enjoy your favorite video game to the fullest!
Guides How to get the Thor and Mjolnir set - Assassin's Creed: Valhalla ❯

Injustice Review: Gods Among Us

WRC 9 | Review of the PlayStation 5 version