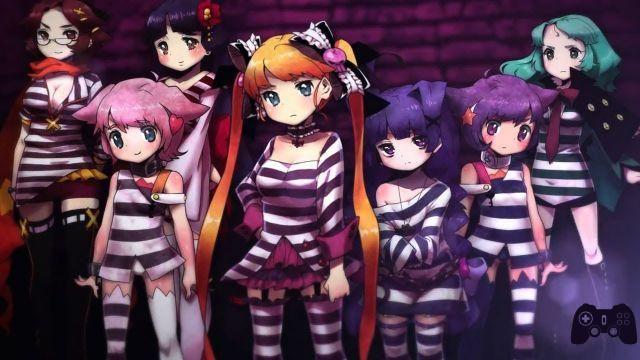 By now we have spent too many words on the current condition of PS Vita. Sony snubs it, most of the users too, but thanks to the good will of many software houses (without forgetting the strong support of indie teams) such as NIS America e Koei Tecmo, the Sony laptop has carved out its own niche audience, with a predominantly Japanese softeca that winks at lovers of JRPGs and visual novels. Many of the titles released in recent months, just think of Akiba's Trip, Demon Gaze o Senran Kagura: Bon Appétit!, they boast much of their "charm" on a fanservice that is sometimes too strong, but appreciated precisely by those looking for certain "spicy" elements. Criminal Girls: Invite Only falls into this category by arrogance, boasting precisely that "erotic" factor that could also deceive, ending up overshadowing any hidden qualities.
The protagonists of the game are 9 girls. Nine criminals, or rather potential criminals. In fact, our role in history will be to guide their souls prematurely torn from life and from a destiny that seemed already written, trying to bring them to redemption by offering them a second chance. With us at the helm of this large group, we will be asked to escort them on a journey into the circles of hell, helping them to pass 4 tests necessary for the salvation of their soul. With this decidedly simple incipit, but at the same time far from usually epic plots compared to the genre to which it refers, Criminal Girls accompanies us for a few hours in complete lightness, between jokes and inevitable double meanings, with a story capable of capturing and keeping glued to the console despite the overall lightness of the title. Why did they end up there? What fate awaited them? What is their past? These are some questions that will flash through your head and to which you will find answers only by completing your mission.

Our figure of "educator" will be the cornerstone of the game, on which the entire gameplay will leverage

Our figure of "educator" will be the cornerstone of the game on which the entire gameplay of the Imageepoch title will leverage, that is the mode Motivation. By fighting each girl will gain in addition to the classic experience necessary to level up, i CM points, which will serve to "punish" the girls and motivate them in battle. These phases are not ends in themselves, but they will be useful for unlocking new skills, whether they are active to use in battle, passive (for the increase of some statistics) or the Field Skill, actions that can be used outside of the clashes. Once the girl to be motivated has been chosen and the necessary CM points have been verified, the phase can be started, which will take place through a simple QTE who will see employed both the touch screen and the retro touch pad of PS Vita, to perform simple actions.
By completing these simple mini-games, the girl's Motivation level will rise based on our achievements, making the new skills available. It will also happen that, during the level-up, our failed delinquents make us requests (to all intents and purposes of the secondary quests) that will serve to improve our relationship with them and, more importantly, will bring advantages such as the reduction of points magic in battle or the required amount of CM during the Motivation phases. All this can be done within the I.nfermerie, special places scattered in the dungeons that will allow us not only to carry out this "thankless" task but also to rest and thus restore the health of the girls or to access the shop, where you can buy items related to the care of our party (always using the CM points). Not only that, each infirmary visited will be connected to the others, an element that guarantees us the possibility of quickly teleporting ourselves from one part of the various dungeons to another.

But now let's move on to the naked and raw playful aspect. Criminal Girls brings to PS Vita a rather peculiar vision of what is the genre of dungeon crawling, offering a gameplay that stands out clearly from the classics of the genre. The exploration of the underground will take place through the traditional top view, with the dungeon that will reveal itself to us every time we visit a new area, which will automatically appear on the map indicating any treasures. No enemy will be displayed on the screen (except in rare cases) and everything is entrusted to the randomness of random encounters. The fights will take place in turns, and so far nothing strange. At each turn, however, we will only be able to perform one action of the 4 available, and each option is related to one of the party girls (this excludes the possibility of using a healing item or reviewing the party's formation). However, the management of the battles, especially in the early stages of the game, appears quite confusing and left to chance. In fact, each girl will propose an "optimal" action to be used according to the situation, be this a trivial physical attack, a spell or a more powerful sequence involving two or more characters.
All this will make every battle unpredictable, as we will not always be provided with an equal solution compared to the previous fight even in the presence of the same enemy. The difference, however, will come after having pitted the gameplay for several hours and understanding the importance of motivating girls. This will push the player to intense grinding sessions necessary to accumulate CM points to be used to unlock new skills and thus expand the possibilities in the battle phase.
The difference in battle will be made by the girls, each with their own characteristics and fighting affinities. We will have, for example, the breastplate Tomoe, specialized in physical and group fights, or twins Yuko and Sako, one skilled healer, the other devoted to fire magic, and so on. It will be up to us to interpret the flow of the battle, trying to field the most suitable party and develop it in order to be ready to face any situation. Also related to the development of the party, Bond Attack will be essential, which will see two characters join forces in devastating wide-ranging attacks, capable of causing massive damage to enemies on the field.

Fog in the Po Valley

On the technical level, however, we are faced with a title that shows the weight of the years despite the change of platform, while keeping intact that vaguely retro taste of the 16-bit era. Coarse and poorly defined animated sprites, backgrounds worthy of the best RPG Maker, in short, beyond an appreciable character design, the graphic side is not what struck us most of Criminal Girls. Then there is the burdensome issue of censorship. Already that the title has come to us is a great thing. Usually such a "Japanese" title struggles to root in the intentions of a localization even in the most willing of publishers. NIS America has always been attentive to the attention and needs of "its public" trying to keep the experience intact, see with faithful adaptations and the presence of original dubbing. Criminal Girls instead slips on an almost unmotivated censorship, which goes to hiding the figures of the girls during the "punishment" with an unnatural purple fog which will gradually vanish without completely abandoning the scene, remaining present in some "critical areas"; just as the screams and moans are eliminated, in favor of an accompanying jingle. A complaint that we honestly did not appreciate and that we found completely superfluous, both for the concept of censorship itself (those who turn to certain titles, obviously know what they will find in front of them) and because the type of "cut" or rather "cover" carried out does not leave much to the imagination, revealing what in reality it was the original game.
For the rest we are faced with the usual process: Japanese dubbing, enjoyable soundtrack (but never shine except for a few songs) and the presence of only English for the texts of the dialogues and game menus.

Verdict 7/10 Monella, Monella, Monella Comment What about Criminal Girls: Invite Only. It is a title that pays the price of invasive and completely superfluous censorship for a level of content that is, after all, in line with other productions that have also arrived in recent months from Nis America. Flying over the question, however, what remains is an atypical dungeon crawler, which has convinced us on the narrative level but a little less on the playful one, with a gameplay that on paper seems to work but in practice is quite abandoned to the randomness of its actions. , and when it starts to mesh shortly after we will find ourselves at the epilogue of the game. As always, if you are looking for a different title than usual and fanservice (albeit heavily censored) is your bread and butter, then Criminal Girls is definitely worth a chance. Pros and cons ✓ The story turns out to be more interesting than expected
✓ Interesting combat system ... x ... which needs time to reveal its potential
x Unmotivated censorship
x Technically old
x Longevity below expectations
Do you want to be a video game expert and know all the tricks, guides and reviews for your video games ? Holygamerz.com is a group of video game fanatics who want to inform you about the best tricks, guides and tips. We offer you the best information to be a reference in gaming, so here you can find guides, tricks, secrets and tips so you can enjoy your games to the fullest. Are you ready to get all the achievements of that game that you resist so much? Enter now and enjoy your favorite video game to the fullest!
Guides How the Persona 5 Strikers Velvet Room Works ❯

Add a comment from Criminal Girls Review: Invite Only