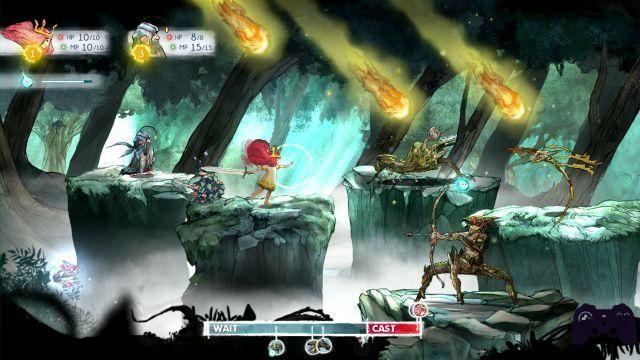 Austria, 1895. Our story begins here. As in the most classic of fairy tales, Aurora she is the young daughter of a duke, motherless. On the night of her father's second wedding, the young woman will fall into a deep sleep, a cold sleep, with no return. Instead of waking up in her familiar world, little Aurora will find herself transported to a magical and fairy world, but also gloomy and decadent, Lemuria. Here he will meet Igniculus, an elemental firefly that will accompany her on her long journey, and of the Lady of the Forest, who will assign her an apparently insurmountable mission: to restore light and hope to the world of Lemuria, defeating the evil witch Umbra and recovering the Sun, the Moon and the Stars, long lost stars. This is the beginning of the new Ubisoft Montreal game, Child of Light, made as a downloadable title for PC, PlayStation 3, PlayStation 4, Xbox 360, Xbox One e Wii U, an incredible experiment in the world of JRPG made from a western house.

I dreamed of flying

Announced at GDC Europe last August, Child of Light is one of the flagship titles of Ubisoft's digital lineup. To make it happen is the Ubisoft Montreal team (previously responsible for Far Cry 3!), Which for the first time engages in a completely new genre, and often unusual for a Western development house, that of role-playing games with a Japanese setting. Right from the start Child of Light has garnered the attention of critics and audiences, relying on one extraordinary visual style, based on the use of the now tested engine UbiArt, previously seen in Rayman Origins and Rayman Legends. The game puts us in front of full-bodied 2D exploration phases, with a style and level construction that very much recalls those of Metroidvania, seasoned with inevitable environmental puzzles and battles in full JRPG style. In the early stages of the game we will control Aurora as in a traditional platformer, but after one of the very first developments of the plot we will get the possibility of making the young girl fly, completely transforming the game mechanics. This first upheaval is perhaps one of the high points of the game, which instills an incredible sense of wonder and amazement to the player, now able to whiz as in a dream through the spectacular backdrops created by the artistic team, dramatically expanding the possibilities of discovery of the game's articulated 2D stages. In our adventure we will often encounter environmental puzzles consisting of traps, time switches and crates to be moved, for the resolution of which we will have to rely as much on Aurora as on Igniculus. The faithful elemental companion of our protagonist will in fact be independently controllable with the right stick of the controller (or with the Wii U touchscreen or the PS4 touchpad), and can be used to open chests, activate otherwise unreachable switches, collect objects or stun enemies. .

The last key component of the game is the more strictly role-playing one, which takes place in battles with enemies. By getting in touch with one of the dark creatures that haunt the world of Lemuria we will pass to a battle screen, where the fight will take place in perfect style JRPG. The game adopts a combat system that incorporates the Final Fantasy active battle system, with one important variation. At the bottom of the screen we will find a single timeline, on which the icons of Aurora, enemies and any adventure companions scroll. The timeline is divided into a wait and a launch portion. Reached the limit between the two parts, the game will pause, allowing us to choose the attack or ability that we deem most appropriate, at which time we will have to wait for the end of the launch period to observe its effects. The peculiarity of Child of Light lies right here: should we suffer an attack during the launch period, our action will be stopped immediately, taking us back to the timeline. However, the same will also apply to enemies, and it will therefore be strategically important to choose the right attacks with the right timing in order not to be interrupted and indeed to be able to interrupt the opponents. Obviously Igniculus will also intervene in battle. Always with the right stick or with touch controls it will be possible to position the small firefly above one of the enemies, and emit light to slow it down. Or we can place the creature on Aurora or one of her extravagant companions, making them recover small amounts of health. This original combat system is extremely immediate, but also profound at the same time, allowing the player to exploit numerous strategies, thanks also to extremely diversified types of attack and abilities. There is no doubt that the combat phases are among the most exciting Child of Light: it will be of great satisfaction to end the clashes without allowing the opponents to lift a finger, and if we really wanted to find a fault we could complain of the general excessive ease. In fact, some of Aurora's allies possess skills that if developed make battles excessively simple, even if this problem is only explicit in the advanced game, when you have had the opportunity to properly enhance the various skills. Outside of the battles the role-playing component is very simplified, with no management of weapons and equipment, a very basic growth system with just 3 skill trees, mostly passive, and a small gem crafting system, which allows you to add modifiers. to various attack or defense parameters.

The visual aspect of Child of Light is certainly the one that most impresses the player. We've already enjoyed the goodness of the UbiArt engine in some of the past Ubisoft titles, but Child of Light brings it all to a higher level, with masterful 2D settings, created with a watercolor style. On our adventure we will pass through fairy worlds, dark forests, abandoned temples, ice caves and other incredible environments, all capable of leave the player speechless for the imagination with which they have been conceived and the care with which they have been rendered. Lemuria is a decadent world, which has long since forgotten light and hope, but has a melancholy and poignant beauty, capable of breaking through the heart of every player. Even the character design is superlative, with characters that seem to come out of a storybook, and are alive and fascinating, thanks to curated animations and a unique characterization. From a purely technical point of view there is little to say, given that the title is not particularly exorbitant and does not show off particular technological virtuosity, but we note that Child of Light runs at 720p on old-gen and Wii U platforms, while PC and next-gen versions run at 1080p smoothly. Music is another of the strengths of the game. The songs of the game were composed by the young Canadian singer-songwriter Béatrice Martin, aka Cœur de pirate, and have a style magical and melancholy that fits perfectly to the atmosphere of the game, and that perfectly accompanies Aurora's adventure. The main theme of the title is of poignant beauty, repeated in different variations, as well as spectacular and epic are the music of the various battles, made with the help of orchestra and choir: they wouldn't even clash in some of the most famous JRPGs.

Not everyone can make poetry

The duration of the adventure is quite variable, as much of the exploration and combat is completely optional: to get to the bottom of Child of Light it could take 10 as well as 20 hours, depending on your style of play. There is also a mode new game +, which contains stronger enemies and which offers the possibility of maxing out the stats and abilities of the various characters, even if nothing adds to the content of the adventure. For a downloadable title, this is one in every way more than satisfactory duration, although we do note that the ending comes in an unexpected and a bit sudden way: we would have preferred a better construction of the final battle, which instead comes between head and neck to the player when he least expects it. The title is entirely translated into Spanish, and features short narrated phrases which are also dubbed. To increase the ethereal and fairytale halo of the game, the developers have decided to opt for a particular writing of the dialogues: practically all characters except one (it is its characterizing prerogative) they speak in rhyme. Unfortunately this stylistic choice loses a lot  because of a translation that often, in order to respect the rhyme, gets lost in strange and bizarre phrases, sometimes impromptu and misinterpreted. Too bad, because a game in which every other aspect shines with its own light, a little more effort could have been made in the adaptation phase.

Verdict 8.5 / 10 A modern fairy tale Comment Child of Light is a title of absolute charm and absolute beauty. It is the perfect videogame transposition of a melancholic and magical fairy tale, able to catapult the player into a wonderful and poignant world. The title achieves excellence in every field, starting from the artistic realization, undoubtedly superlative, up to the simple but at the same time very deep mechanics. The defects, although there are, are small and easily overlooked: a not perfect adaptation, the level of difficulty calibrated downwards (as long as certain choices are made in the growth of characters) and an ending that arrives so suddenly that leave a little bitterness in the mouth. But the most beautiful stories, the most memorable ones, you know, are always the ones that in the end leave a veil of sadness, of dissatisfaction, and in this Child of Light is champion. A wonderful game, a courageous experiment and certainly worthy of a prize, as well as the demonstration that Ubisoft is not just blockbusters like Assassin's Creed or casual games like Just Dance. Well done. Well done. BIS. Pros and cons ✓ Magical and fairy atmospheres
✓ Artistically excellent
✓ Original and deep combat system x Abusing some skills can make the game overly easy
x Adaptation not among the happiest
x The Finale arrives in a sudden, somewhat anti-climatic way
Do you want to be a video game expert and know all the tricks, guides and reviews for your video games ? Holygamerz.com is a group of video game fanatics who want to inform you about the best tricks, guides and tips. We offer you the best information to be a reference in gaming, so here you can find guides, tricks, secrets and tips so you can enjoy your games to the fullest. Are you ready to get all the achievements of that game that you resist so much? Enter now and enjoy your favorite video game to the fullest!
AOT Wings of Freedom review ❯

Beyond Blue | Review, a sea with few emotions