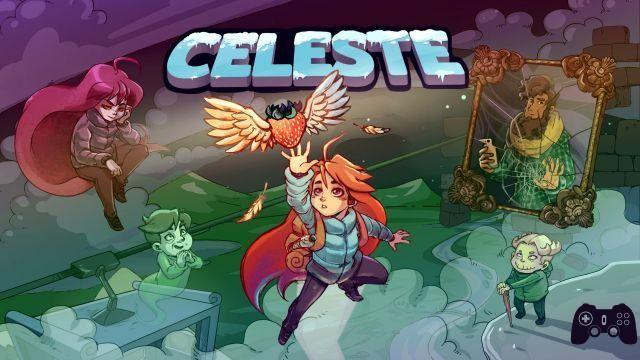 Celeste breathes new life into indie platformers. It does so through sweet story, sublime gameplay, and pixel-perfect jumps to bring all the saints down from heaven.

There is a reason why platform games are born and dead. This design has a name and is called Super Mario. The game that perfected the leap, elevated it to a single mechanic, but ultimately struggles to innovate itself. Matt Thorson, aware of this looming ancestor, creates Celeste and relieves Nintendo of the long-awaited renewal. He proposes, in no uncertain terms, the modern platform game which, as Miyamoto-sama had done for Mario, makes level design a religion.

Celeste isn't just a game, it's proof that 2D tiered platformers still have a lot to offer. The recent award like Best Indie Game at TGA, but perhaps even more so the nomination for the Game of the Year award, are the latest in many awards that the game has collected during 2018. Awards aside, it is an intense and expressive game, an experience that tells the story of anyone who has been faced with an obstacle that he thought insurmountable. Climbing a mountain is the metaphor that Celeste uses to talk about us and our difficulties.

I am certainly not an expert in mountaineering, I have climbed at most one of those climbing walls with colored supports. However, I "climbed" the Monte Celeste, I reached the top and nothing was waiting for me. The cosmic void, air made of rarefied pixels and a pastel-toned landscape. Peace of mind.

One night on Monte Celeste

In the game impersonates Madeline, a girl who learned of Monte Celeste from her father's stories. After breaking up with her boyfriend and determined to stop breaking promises made to herself, she makes the decision to climb this mysterious mountain. The mountain is able to change the life of those who decide to reach its summit, and Madeline feels the strong need for a renewal in her life.

Madeline's goal is not clear and defined, it is indeed extremely abstract and a little alienating. The games have accustomed us to reasoning by missions and micro-objectives and sometimes we ask ourselves "But why am I climbing this damn mountain?". It's a very typical Nintendo-of-once-upon-a-time approach, with that 'go on and don't ask questions' subtext. The difference is that Celeste has a few more narrative elements. Dialogues scattered throughout the levels serve to delineate more and more the nature of the protagonist and to give shape to its goal (even literally, in some cases). Perhaps the story is not as incisive as the message it wants to propose, which instead comes very clear as the adventure proceeds. Without a doubt this is a gimmick to give space to the gameplay, but some aspects are only sketched and treated perhaps with a little too lightness. 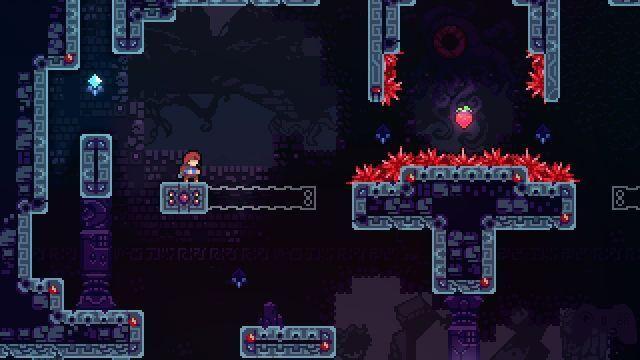 For the first few minutes of the game you have a jump and a vertical climb. The magical element comes shortly after the adventure begins and is represented by a dash that Madeline can perform in all 8 directions of the D-Pad. This mechanic acts as dodge, double jump or dunk depending on how you use it, making it extremely versatile. The dash can be used only once in the air and recharges as soon as it touches the ground, alternating the color of the protagonist's hair to make it clear whether it has been used or not.

Celeste takes simple and already widely used mechanics in many platformers and makes them perfect, with flawless controls which are nothing more than an extension of the player's mind. In the levels, however, Matt Thorson gives birth to an avalanche (pun intended) of gameplay modifiers that expand and overturn the simplicity of these mechanics. As level design is the most successful part of the game's production, talking about these "props" specifically would spoil the pleasure of discovering them as the adventure progresses. Suffice it to say that Celeste is much more than it seems, in terms of both gameplay and experience.

Climbing Monte Celeste is challenging to say the least, every jump must be calculated to the millimeter and every dash must be used with caution. In the game you die an infinite number of times, in the game you lose patience an infinite number of times. The game teaches us to fear the Mountain, to respect you and the dangers it hides. It is a game divided into rooms: "Complete one room and move on to the next, die and start over from the room you are in". However, it is not a punitive game: the death animation consists of a handful of frames and the respawn is immediate; it can be said that Celeste encourages the spasmodic reiteration of each room until it can be overcome. Ultimately, it encourages you to move forward, to overcome one small obstacle at a time.

It is a revolution for games that make frequent death a boast. The latter have accustomed us to slow and painful deaths, to the loss of many of our progress, to black screens with funeral music and writings ready to remind us how scarce we are. In Celeste, failing is part of the game and in half a second you are ready to throw yourself again between spikes and ravines, without particular problems. Between one death and another the music does not stop either, which continues in a loop until the setting is changed.

Speaking of music, those of Celeste are sensationally successful and spot on in every proposed situation. Truly a flawless Soundtrack, a retro-synth orchestra that to define poetic is almost belittling. 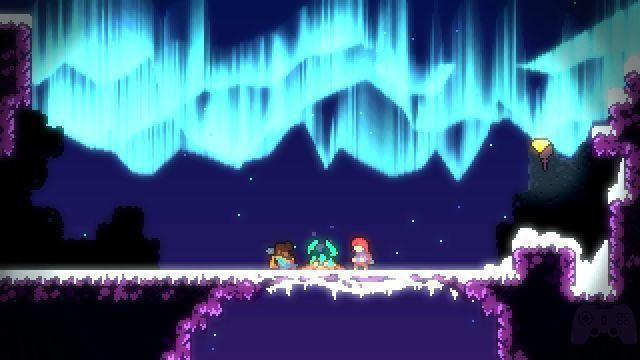 The protagonist, Madeline, is another of those people in search of herself, one of the many who have populated modern literary fiction.

How many video games, however, incorporate the theme of the search for self? Very few if you think about it, and the reason is simple: playing games that talk about knowing oneself is difficult for a matter of agency, of identification. The player must feel empowered with the character and often the life of the common man is not as eventful like that of the average protagonist of the videogame world. I don't shoot zombies, I don't solve puzzles with portals, but I'm "just" a human being with my daily problems and anxieties. I play video games to escape these anxieties, and to experience an otherworldly adventure.

Whether it's an action-packed shooter or a narrative game capable of giving very strong emotions, most of the adventures tell the linear story of a character, where any systems of choices are only forced bifurcations that try to emulate the player's personality.

Celeste is different, it is a game that prevents you from escaping from everyday life, because highlights that human need to overcome obstacles and live in change. It's a game that talks, a game that tells you: “Now you know how, go and climb your Mountain, one level at a time”. 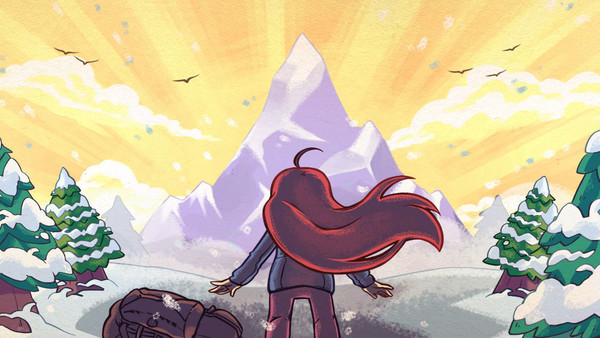 Verdict 9.5 / 10 Mountain Catharsis Comment Celeste is a courageous act of bringing new life into a genre that is highly abused in the indie scene. Not only brave, but also successful: Celeste is arguably the best 2D Platformer of the last 10 years. Playing it is a pleasure that no human being should deprive himself of. Pros and cons ✓ Simple mechanics, boundless variety
✓ The New Testament of 2D Level Design
✓ Life lesson for serial procrastinators
✓ Exceptional music
✓ Fiction involving ... x ... but a little sketchy
Do you want to be a video game expert and know all the tricks, guides and reviews for your video games ? Holygamerz.com is a group of video game fanatics who want to inform you about the best tricks, guides and tips. We offer you the best information to be a reference in gaming, so here you can find guides, tricks, secrets and tips so you can enjoy your games to the fullest. Are you ready to get all the achievements of that game that you resist so much? Enter now and enjoy your favorite video game to the fullest!
Fallout 4: Contraptions Workshop review ❯

Need For Speed: Most Wanted Review

Add a comment from Celeste Review - Free-climbing between pixels