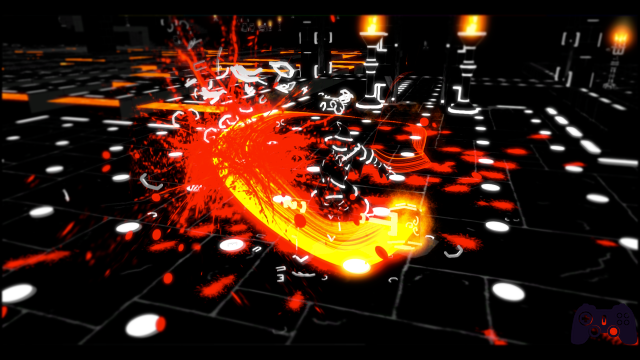 We have already mentioned how the market for low-budget developed (and then sold) productions has brought back to life genres that seemed to have been definitively crushed under the weight of the years. The Scottish Stormcloud Games they must have wondered at some point what would have happened by taking this phenomenon to the maximum terms, going to fish out a very popular genre at the dawn of the industry, especially on PC: Brut @ l aims to project in 2016 the classic roguelikes in ASCII graphics, full titles made using text characters to "draw" the various elements on the screen, trying to stay in balance between classic and modern and without forgetting the attitude (really) hardcore typical of these early experiments.

I can't go down or up

The aim of the game is simple and leaves no room for explanations, motivations and other frills of the kind: the player, in the role of one of the four playable characters (Warrior, Amazon, Mage and Ranger) must pass through the 26 procedurally generated dungeons. until you reach the last dungeon, challenge the Guardian of the labyrinth and claim his treasures and riches. The choice of the character basically affects only the aesthetic aspect (and the animations) of the alter ego and the initial distribution of the skill points that are obtained with each level increase. The Warrior right away he will be able to use axes and clubs, count on three charges for the special move (we'll get to that) and hit harder with his bare hand. The Cleaning instead he is more balanced, and is able from the beginning to infuse elements and forge weapons following the instructions that are hidden in the various levels, to use the bow and, thanks to the Assassin's Mark, he can kill in one fell swoop enemies if he can sneak up on them from behind. L'Amazon is a sort of middle ground between the two classes, being able to count both on the aforementioned Assassin's Mark and on the possibility of crafting weapons immediately and on the physical enhancement of the Warrior, although not being able to use axes and hammers from the beginning and having a available only one charge of the special move. Finally, the Mago he fights more at long range, using mana to launch attacks with his staff or with wands collected in dungeons. In addition to these initial distinctions, there are no other stakes, and at each level-up it will be possible to acquire a skill of any branch among those present, provided that you have already unlocked the previous ones. In the long run (or simply because you want to play a character outside the box) then each of the four classes can go to fill the role of the other, as long as you get enough experience points by killing enemies and destroying the objects on the screen.

In Brut @ l, Death means Death: In the case of Game Over, everything has to be redone

In the course of experience, there is therefore only one imperative: to survive. In case of death, Brut @ l will take back all the accumulated loot and all the progress made, condemning the player to start all over again (with a new set of layers). It does not matter if you fall in battle against a horde of dwarves, zombies and skeletal archers or if, trivially, you take the wrong measurements and end up off a platform after a jump: the game over, inevitably, coincides with the loss of progress. facts and the cancellation of the save from its slot, giving the experience a touch that, net of any subterfuge and cheating by those who play, appears damn punitive. Keeping this in mind, the player must from time to time decide if and how much to explore the dungeon on duty, poised between the risk of running into some tougher enemy (from this point of view Stormcloud Games has not skimped, given the over 20 types of enemies present) or that at the moment you are not in a position to face and the possibility of running into some project, letter (which correspond to the basic elements to be crafted then to create new weapons) or loot of various kinds. In fact, every monster that inhabits the dungeons of Brut @ l has specific characteristics, with zombies that for example can only be eliminated by fire (using a burning torch or a weapon with an elemental effect of that type) or priestesses capable of inflicting the player the blindness status, blurring the field of vision and making the more treacherous and hostile environment.


In any case, you start the first dungeon simply armed with an unlit torch (it can be lit for a certain time in front of a fire) and a shield, which can be used both to block enemy attacks (which will still inflict damage, unless execute the classic “perfect parry” at the right moment) which as a weapon, a little rough (it takes a while to go back) to throw. There is also the possibility of dodging attacks during the parade, with the classic rolls or, in case you face some well-placed enemy, slipping behind them passing under their legs. Each character (with the exception of the Warrior, who has 3) has a charge available, as mentioned, that allows you to use a special move that inflicts more damage. By collecting projects and corresponding letters in the different rooms it will be possible, once acquired the ability to forge weapons, to create more effective "tools of death" than the shield and bare hands, to which it is then possible to add elemental effects (fire, ice, electricity, poison and arcane) whenever the required "magic character" (a normal letter, but the color corresponding to the element) is acquired. To use the special move of a certain type of weapon, however, it will be necessary to purchase the relative upgrade with experience points. By collecting ingredients and ampoules it is also possible to prepare potions, whose effects are randomly associated with each game to a color: if the red potion before the game over was the Protection Potion and temporarily gave invincibility, after the defeat it can become the Potion of Hell and burn whoever drinks it; luckily it is possible to launch any of these concoctions even at the enemies, knowing full well that you accept the risk of going to upgrade them for a certain time (unless you have obtained enough skill points to be able to unlock the knowledge of the different potions). Finally, it is also possible to come across some types of food, to be used to recover a certain amount of health and, above all, to satiate the hunger of one's character. A hungry character will see mana and special move indicators recharge more slowly, ultimately having less "wild cards" to drop in critical situations.

The basic battle system is simple, but it succeeds thanks to some classic ideas and others less traditional

The final result from a playful point of view, especially once you understand the mechanics of the game and find the most suitable quadrature for your style of play, it manages to entertain and to be tremendously solid even if in fact there is nothing particularly complex on the plate: the attack system in fact involves the use of a single button, but still manages to give a certain dose of technical satisfaction thanks to the presence of the perfect parry and dodges, and the use of the shield or special moves at the right time adds some variable in the field to give extra options. The only drawback to keep in mind is that, as already highlighted, the game over involves having to start from scratch: a high price that on the one hand increases the charm of the challenge but on the other hand could keep away the players less inclined to collect "sticks" of this type, also because there are no discounts even after trivial mistakes like a jump that is a little too long. The effect is somewhat mitigated by the possibility of playing in a cooperative (only locally) the experience with another player, where in this case until both of you go KO there is always the hope of "resurrecting" if the ally decides to donate half of his health points (in case you fall off the map, however, the corpse is transported to the beginning of the level, which must then be crossed again). Also not to be underestimated is the extra constituted by the level editor present, which allows you to create, play and share customized levels.

The charm of letters

The style is certainly not lacking

From a visual point of view, Brut @ l amalgamates the "old school" vision of this kind of dungeon crawler (the walls formed by asterisks and gates, the scene elements made up of characters) with a more modern and three-dimensional context. The final result undoubtedly has character and gives the product a precise identity already once the title has been launched. The only drawback, from this point of view, is the impossibility of "moving away" the view from the map when playing the multiplayer experience, which inevitably limits the movements of both heroes (you can not move away from your companion more than a certain distance) where perhaps it would have been better to insert a certain "tolerance range" in which the camera widened the plane while reducing the image.

Verdict 8/10 Half a vote less if you are a believer Comment If the intent was to bring that kind of deeply old-school and punitive dungeon crawler into 2016, Brut @ l certainly hits the mark: the basic gameplay, while not being very deep in the attacking phases, it does not slip (at least in the advanced phases) in button smashing because on the one hand the player is always on the rope and on the other Stormcloud Games has however implemented a series of alternative and more reasoned options than the classic head down charge (which still works in the first dungeons). Not rewarding a game that wanted to represent a certain type of challenge because it represents that certain challenge would be wrong towards the developer, but not for this, however, Brut @ l is to be recommended to all players: know immediately that you are in front of a challenging title, where Game Over sounds so much like "death" (final and without appeal) of your character. Pros and cons ✓ Damn challenging
✓ Visually guessed
✓ Multiplayer ... x ... But only locally
x "Limited" movements if you play in 2
x Death means Death
Do you want to be a video game expert and know all the tricks, guides and reviews for your video games ? Holygamerz.com is a group of video game fanatics who want to inform you about the best tricks, guides and tips. We offer you the best information to be a reference in gaming, so here you can find guides, tricks, secrets and tips so you can enjoy your games to the fullest. Are you ready to get all the achievements of that game that you resist so much? Enter now and enjoy your favorite video game to the fullest!
GODZILLA review ❯

Toukiden Review: The Age of Demons