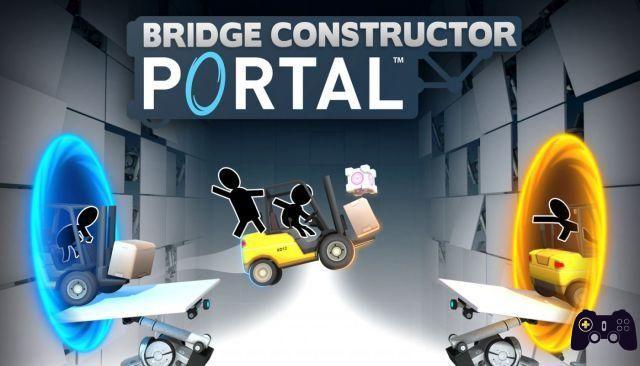 All the insensitive (involuntary?) Humor of GLaDOS, 60 test chambers and pet cubes. Bridge Constructor Portal is an experience that flows great even without using the Gel Propeller (but luckily he decides to use it anyway).

Tetraphobia - definition more or less taken from Wikipedia - is a form of fear towards the number 4 particularly widespread in the East. These Japanese are always ahead, one might say: Gabe Newell stopped exactly one unit before, as Valve's Intellectual Properties systematically eschew number 3. Half Life 3 is still a chimera, Team Fortress has seen only one sequel despite the success of its hats. Portal? Even this series is officially stopped where we left it in 2011… Or at least until today. Bridge Constructor Portal it will not be a real third chapter of the series, but be careful to call it a spin-off: the atmosphere of the series is breathed in everything and the philosophy of the world of Chell and GLaDOS is sewn to perfection on the DNA of ClockStone Software. The result is that 60 test chambers after the author of this - yet another - bizarre review struggled to detach from the screen of his iPad to switch to the screen and keyboard of his laptop and write these lines. And he is still wondering why he is doing it, given that your happiness as a fan of the Genetic Lifeform and Disk Operating System is 4.99 € on the App Store (or 9.99 € on Steam - during 2018 also on consoles). Let's do ourselves a favor, press the Like button, go to the marketplace of your choice and leave me alone, You will not regret it.

The name says it all, and if you haven't hit the store yet, you have problems

Still here? Okay, let's talk a little bit about Bridge Constructor Portal. The name is quite explanatory, so unless you've avoided the never-too-acclaimed Orange Box as the plague (what are you waiting to fix?) it should be enough to explain more or less exactly what you're going to buy - even if you don't know it yet. It is a crossover between the ClockStone Software series and what is one of the most unsettling IPs of the past generation, which succeeds in the far from simple feat of skating nimbly on the thin ice of "but give us a chapter 3?" and skepticism by creating an ideal meeting point between the two franchises. Because the core gameplay is that of Bridge Constructor and well ... Bridges need to be built (duh) that they stay up possibly long enough for Aperture Science drivers to pass from the entrance to the exit of the test chamber. But at the same time, and if you have read "Aperture Science" and "test chamber" you should have understood it, Portal is breathed at every level of the experience. The humor of the series is all there, numb and heedless of the safety of the hapless employees who happen to be on screen as we remembered it, and above all there is GLaDOS, always ready to dispense advice of dubious usefulness and disarming irony and to say the wrong thing at the wrong time. But with the right comic timing.


In short, Bridge Constructor Portal is Portal, even if we are not impersonating Chell and the portals have a different color (insult! - no, in reality there is a practical motivation and it is also given in-game).

There are all the elements that the two chapters of the main series have taught us to love, from the iconic pet cube to the gels of Portal 2, and as the cameras introduce these new elements, strategically placing lasers and robot turrets in order to make us puzzled by the search of the solution of the puzzle (ah, did we not say that it is a puzzle game? And was it necessary?) one cannot help but feel at home. The game world will have become two-dimensional, but the operating logics are always the same. The portals continue to hold the momentum of whatever is pushed into them, the turrets keep firing on sight, and the Gels function exactly like in the second chapter. What changes is only the approach to the puzzle, which - yes, we have already told you - is taken from Bridge Constructor and justifies the writing “Bridge Constructor” under the app icon.

The gameplay is a little less than a drug. But of those who do not let you sleep at night, making you count the carts instead of the sheep

There are two basic tools available. Or rather, actually three, since the rigid supports can be transformed with a tap into carriageways, in order to build a surface that the trolley (and its driver, but this is a side effect) can travel. These two elements share characteristics and dimensions, being able to stretch by a predefined quantity and, in essence, behaving like rigid objects with all the consequences of chance. Which obviously does not apply to the fifth third element, the elastic cords that can be used in case of need to give more stability to the constructions, boasting a wider elongation capacity and a more ... elastic behavior (yes, we should not repeat several times the same word but in the end the concept is that). Translated: the response in case of stress - that is, to the passage of trolleys - is more mobile and could cause oscillations of the structure. Re-translated: eye, everything could come down, especially when after passing the first trolley you press the "Convoy" button and start the transhumance of all the transporters waiting in the tunnel, with the consequence of having to manage multiple elements on the screen. In fact, it can happen and it happened to us that a good solution to pass a single trolley would not work in the case of the Convoy, blocking itself in the middle, destroying itself or causing unexpected accidents that prevent the completion of the test chamber in this mode (to access the next however, it is sufficient to let only the first trolley pass through there). 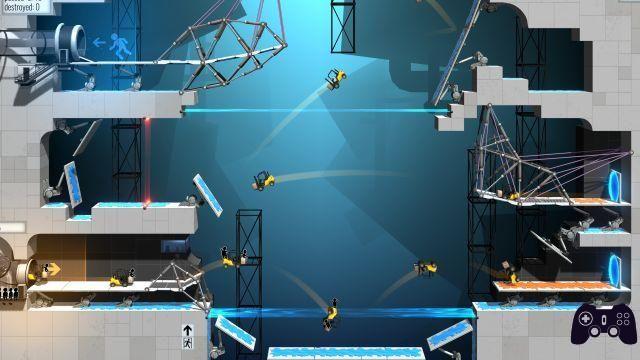 In short, the challenge is really well thought out and the gaming experience is more than satisfactory, and the version for the mobile market that we wanted to try is definitely lived up to our very high expectations: the price is the goal than expected on Steam, the contents are the same and the conversion of the controls, at least on the iPad (but since you can use the pinch to zoom at will, one could say also on the iPhone) is intuitive and done respecting what is the User Experience we are now used to in front of a touch screen. Now, we could go into details and explain to you in detail all the controls available and how they work on iOS and Android, but as mentioned we have better things to do and - by now at this point you should have a decent monkey on your shoulders too - you too can use your time more productively. So grab a screenshot taken directly from the game menu that is worth more than anything we could throw up on the screen and draw your sums: it is more than enough to understand if you want the highest precision of the mouse or if you prefer to take the playful package with you. And we have already clarified how much the difference costs in terms of euros, so we have a clear conscience. 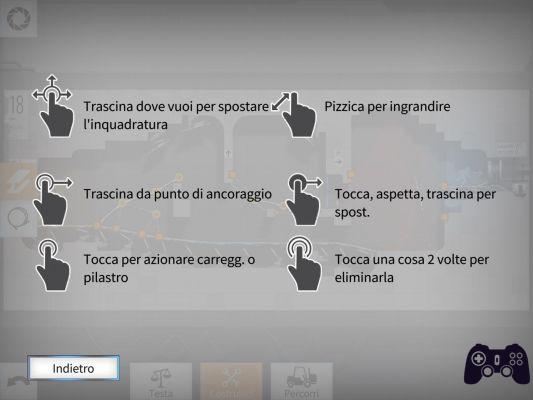 Verdict 9/10 THE crossover Comment Bridge Constructor Portal is Portal. Clearly it is also Bridge Constructor, but it is above all Portal, so if you are a fan of the crazy and disarming Valve series you cannot miss it (if you are not a fan of the series instead or you have not yet played it - envy! - or you are simply from lock up). The spirit of both series is perfectly captured, the gameplay works great and there is GLaDOS, there really isn't a single reason not to pay those dear and good folks at ClockStone Software. And having distracted us from the gaming experience to write this review is probably the worst thing you have done this year, we will not fail to report it to Santa Claus ... Pros and Cons ✓ GLaDOS, do you need anything else?
✓ Addictive
✓ Controls well adapted on mobile x It is not a product for everyone (but it also applied to Portal)
Do you want to be a video game expert and know all the tricks, guides and reviews for your video games ? Holygamerz.com is a group of video game fanatics who want to inform you about the best tricks, guides and tips. We offer you the best information to be a reference in gaming, so here you can find guides, tricks, secrets and tips so you can enjoy your games to the fullest. Are you ready to get all the achievements of that game that you resist so much? Enter now and enjoy your favorite video game to the fullest!
Games with Gold Special: July 2017 Game Guide ❯