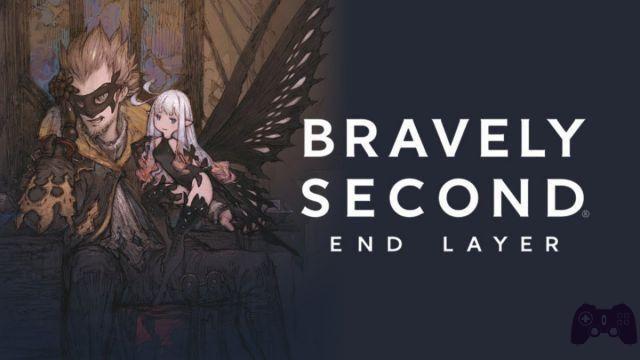 A little more than two years after the excellent Bravely Default, a title that we had greeted with pleasure as a return to origins for the home of Final Fantasy, Square Enix finally returns to the charge with Bravely Second: End Layer, direct sequel that re-immerses us in weight in the magical atmospheres of the land of Luxendarc and consolidates the position of the series as a love letter for lovers of 16-bit JRPGs of the time. A few things have changed in the development team since the previous episode. If the labor is once again provided by Silicon Studio and the character design from Akihiko Yoshida (Final Fantasy Tactics, Tactics Ogre, Vagrant Story), the composer's professional commitments Revo they forced an alternation with Ryo of the Japanese group Supercell, while a team of in-house writers replaced Naotaka Hayashi of 5pb. when writing the title. How did these replacements affect the quality of Bravely Second? Will the title be able to show itself up to the famous predecessor? Let's find out together.

Bravely Second is set two years after the events of Bravely Default. THE four heroes of light, Tiz Arrior, Edea Lee, Agnès Oblige and Ringabel awakened the crystals, stopped the war between the Duchy of Eternia and Orthodoxy and saved the land of Luxendarc from a terrible threat. A quick introduction retraces the deeds of the heroes and reveals their destiny: Agnés has become the pope of Orthodoxy while Edea has decided to accept her role as heir to the throne of Eternia. Ringabel has returned to his world as Tiz Arrior has plunged into a mysterious, non-awakening coma. Thanks to the friendship born between fellow adventurers, Crystal Orthodoxy and the Duchy of Eternia are as close as ever to burying their differences once and for all and establishing lasting peace, when a powerful new adversary comes to threaten Luxendarc. Just as the two factions are about to sign a peace treaty, the Kaiser Oblivion of the Glanz Empire launches an attack aimed at annihilating both sides and kidnapping Popess Agnès. Yew Geneology, a young captain of the Crystal Guard and new protagonist, will then set out on a journey to save Agnès and stop the machinations of the evil Kaiser. In the first hours of the game we will quickly get to know Yew's allies and travel companions: from the previous episode both Edea and Tiz will return, while the other new entry of the team will be Magnolia Arch, a mysterious girl from the Moon in search of the Ba'al, space entities that bring death and destruction, responsible for having devastated the lunar outpost from which Magnolia comes. The plot of Bravely Second is divided into dozens of hours of gameplay through multiple twistssome predictable, some less. Compared to the previous episode, the change of screenwriters is quite evident. The tone of the narrative is different, lighter and more easy-going. Going a bit to clash with the gravity of the situation, the team of heroes and supporting characters often get lost in frivolous and irrelevant conversations. This was also true in Bravely Default, it is true, but in the sequel this aspect is considerably more evident. Many elements of the dialogues are often not very credible: no one appears surprised or incredulous in front of a girl who claims to come from the moon, even important characters die and no one blinks, no one ever seems to wonder who the infamous Kaiser is or where he comes from. Despite these discordant notes, the writing of Bravely Second is still pleasant: the peaks of the first chapter are never reached, but at the same time those slips that were present in the first episode are also avoided.

The game system of Bravely Second resumes with almost no changes that of Bravely Default. We are faced with an original interpretation of a JRPG with turn-based combat. The innovation of the series consists in the introduction of the Brave / Default system. Basically the player is free, using the Brave command, to attack multiple times in a turn, consuming BP points. BP points may have previously been accumulated with the Default command, giving up attacking for a turn and staying on parry, but there is also the possibility of going into PB debt, in this case forcing the character to recover by giving up turns subsequent. The system allows the implementation of risk-based battle dynamics extremely satisfying for the player: it is possible to perform consecutive Braves hoping to annihilate the enemy in a single turn, bearing in mind that in case of failure we should suffer his attacks helpless for a few turns, as well as a more methodical and thoughtful approach. , perhaps more useful against Bosses than with common enemies. The game implements a elaborate class system. Each character can play any class, as long as they are in possession of certain objects, called Asterisks. Bravely Second presents a good half of new classes, more and more bizarre and particular, obtainable by completing the main story. The classes of the previous episode will be unlockable by completing the side quests. While in Bravely Default all classes were obtainable in one game, in Bravely Second we will only be able to obtain half of the optional classes, forcing the player to a minimum of planning. To get the remaining classes it will be necessary to wait for the New Game +. Classes influence gameplay in a radical way, often revealing themselves more decisive than the level of the characters or their equipment. Bravely Second allows you to equip the skills of a secondary class alongside the one currently in use, and to select passive skills from all other classes. The player has a crazy freedom of action in researching and discovering the winning combinations for each situation. The picture is completed by three other features changed by Bravely Default: the ability to call in support in battle the characters of other users who have the game, that of stopping time for optional attacks using Sleep Points (points accumulated by keeping the console in Sleep Mode or acquired with microtransactions) and to use special attacks. The latter are completely customizable by the player, who can decide their name, activation condition and effects, as long as they have obtained the necessary materials. A very interesting aspect of Bravely Second is the possibility for the player to memorize and automate attack sequences to be repeated and to freely customize the speed of battle and the frequency of random encounters. Provided you spend some time to understand how the multiple features work, the game's battle system is deep and extremely rewarding, allows you to minimize annoying grinding, and as in the prequel it is the greatest strength of the game.

On the audiovisual front, Bravely Second draws heavily from its predecessor. The vast majority of environments are in fact recycled by Bravely Default, including cities and dungeons. While this can be seen as a form of laziness of the development team, on the other hand it is an opportunity for admire once again the splendid settings made as a watercolor, made even more spectacular by a stereoscopic 3D effect among the best seen on the Nintendo portable console. The graphic style adopted has also been taken up in the few unpublished locations, giving a great sense of coherence to the whole game world. As for the music, the change of composer goes almost unnoticed: Bravely Second recycles most of the pieces of Bravely Default and the new compositions, few in reality, maintain the same style. Added to this is an excellent English dubbing, accompanied by subtitles in all major languages. The overall result is that of an extremely pleasant game to see and hear, even if for those who have already played Bravely Default the feeling of déjà vu may be excessive. On the longevity front we are on very high levels, with dozens of hours of history, seasoned with minigames and a New Game + mode.


Verdict 8.5 / 10 Slightly less "good" than the prequel Comment With this second episode the Bravely series is confirmed as one of the most interesting JRPG sagas on 3DS and on any modern platform in general. If the first game had amazed us for the sum of great artistic qualities and a refined and very deep gameplay, Bravely Second decides not to upset these bases and to use them to tell a new story. A story with a different tone, which perhaps does not reach the heights of that of its predecessor but which at least avoids its bad slips. Some may not like the overly lighthearted tone of the conversations and the general lack of a sense of urgency, but the effort made in building likeable and well-characterized characters remains admirable. The combat system is once again the real strength of the game, promising planning and customization maniacs bread for their teeth. Net of the obvious shortcuts used by the development team (the massive recycling of assets from the first episode is an example), Bravely Second is once again a title that JRPG fans should not miss for any reason. Pros and cons ✓ Varied and very deep combat system
✓ Very high artistic level
✓ Many hours of gameplay
✓ Really nice characters x Tone of the adventure upset compared to the first episode
x Massive asset recycling from Bravely Default