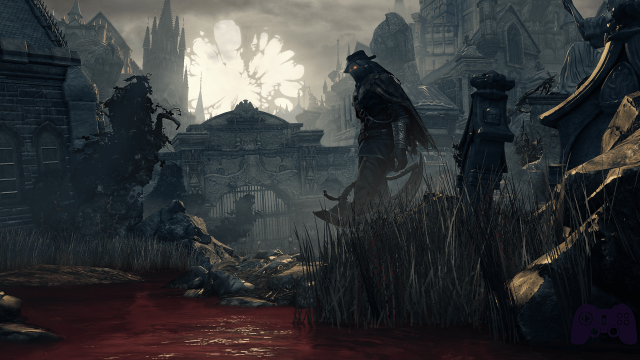 The six years that separate Bloodborne from Demon's Souls, as we said a few months ago on the occasion of the review of the From Software title, saw the explosion of the "Souls saga" and allowed the latest creature of Hidetaka Miyazaki to "go home", on Playstation 4, receiving that treatment that usually Sony reserves to its exclusives that had been denied at the time to the progenitor of the series. The Old Hunters proves this statement for the umpteenth time: if the sixth Archstone has never been added to the kingdom of Boletaria, Yharnam has instead seen the arrival of a new play area. Will it be worth going through the night of the hunt again for this expansion?

Please note: The contents of The Old Hunters can be achieved whether you are facing the Bloodborne experience for the first time or during the New Game + (and later): the only mandatory requirement is that you have already defeated Vicar Amelia at Cathedral Ward. In the first case, the recommended level before tackling the expansion is 65, which rises to 115 for the second run. For our part, considering the challenge level of the package, we recommend in any case (especially if you are in the first game) to enter the Hunter's Nightmare only near the end of the game and once you are sure of your equipment.

The Old Hunters reveals something more than the base game, while remaining faithful to the canons of the series

The tradition of From Software wants that the narrative aspect of the titles of the Japanese house leaves ample space for the free interpretation of the player, remaining in balance between the said and the unspoken and deepening much of this aspect through dialogues and in-game descriptions rather and through a proper story-telling. The Old Hunters could therefore only lend itself again to this game of undertones and whispered truths, while trying to offer a glimpse of what was the first dawn of Yharnam and (above all) of the Church of Care: compared to the basic experience this new downloadable content unbuttons a little more without going against what is the format of the Souls series, with the effect of being able to remain cryptic but at the same time leaving some more basic information on the road about the events that led to the nights of the hunt.

The atmosphere continues to be spot on, with some stumbles

From the design point of view, the three macro areas into which The Old Hunters is divided appear quite familiar at first glance, with the Hunter's Nightmare (the first) which actually presents (with valid in-game justification) assets already used for Yharnam by assembling them in a different way, and then gradually taking on more distinctly new connotations (except for a "half relapse" involving two of the bosses included in the package) up to the Fishermen's Village. The whole is however permeated by the decadent atmosphere and the Gothic features of the original title, essentially settling on the same excellent levels (with as mentioned some stumbling blocks but also some really successful scenarios).

Don't let your guard down, especially if you have abandoned bloodborne for a while

From the point of view of the challenge, as mentioned above, From Software did not allow itself to be softened and has packaged a product where, especially if Yharnam had abandoned itself to devote itself to the other titles released at the end of March to this part, it really knows how to put test the player. In fact, especially the first areas are teeming with hunters now drunk with blood, unable to distinguish monsters from allies and ready to indiscriminately attack one or the other. Unlike their counterparts outside the Nightmare, these once defeated do not leave the play area forever, but as with other creatures, they return to occupy their position once the area is recharged. In addition to providing the player with a rude welcome, nightmare hunters allow you to have a first taste (and in more than a few cases to get hold of) of the new weapons introduced by The Old Hunters, which thanks to their particularities open up new possibilities to players approach once on the battlefield: Simon's sharp bow, for example, manages to perform the dual function of a white and ranged weapon, enhancing the builds that focus on the Tint of Blood, while other innovations focus on the amount of damage, also elementals, to be inflicted (above all the Explosive Hammer) and others still offer new ideas to another of the aspects overshadowed by the basic game, especially in the first run, the Beyonder.

The new weapons are convincing, but they risk being overlooked: they need to be upgraded from scratch

In particular, the Sword of the Sacred Moon, thanks to the possibility of inflicting physical damage, is an excellent one designed to attract players who have kept away from it on this branch. The only drawback from this point of view concerns the progression: net of the considerations on the linearity of this aspect already made for Bloodborne (and which we reconfirm) in order to fully grasp the potential of these additions it is necessary to bring them, obviously, to a fairly high level, which is certainly not possible by playing the whole thing once. Let's clarify immediately, it is not a defect in and of itself (it is a more than normal aspect in a video game), but surely the result is that of partially undermine the appeal of the new weapons in favor of the "safe used" given by the equipment perfected during previous games. A pity, since the work done by From Software can be seen and can offer more than a few new ideas.

If the welcoming committee reserved for the player by the other hunters and more generally by the beasts that populate the three areas of The Old Hunters was fierce, the five bosses added by the expansion could not be less: on this front too, especially if you haven't taken Bloodborne back in your hand for some time, some attempts are needed before you can get the better of it. on these higher caliber opponents. However, one of the novelties of the latest patch comes to the aid of the player, which allows you to summon (in the same way used to ask for the assistance of other online hunters) some characters controlled by the CPU, whether or not they are part of the new faction made available from From Software also in the basic package (the League). A help that perhaps, not so much in this expansion as in some of the Chalice Undergrounds and in the "old" areas, maybe it simplifies things a bit for less experienced players, but that remains a simple option in any case which you can safely ignore if you are not interested.

On a technical level it is still a bit rough, but the progress made by From Software can be seen

On the occasion of the review of the original experience, which on the whole we considered (and we believe) one of the most solid of this 2015, we had pointed the finger at some of the technical aspects of Bloodborne, like the previous exponents of the series a bit rough if looked at under certain lights. From Software in recent months has continued to work on the game and, although everything has not suddenly disappeared and overall Bloodborne remains one of the exclusives of Playstation 4 visually less convincing (although artistically everything is, as mentioned, very well guessed) there has been progress: most of the glitches that allowed to accumulate unduly Echoes of the Blood and items have been resolved and above all uploads now fall within a more than bearable threshold. In short, anyone who decides to venture into The Old Hunters will find in their hands a product that is certainly still quite "dirty", but much less interspersed with waiting in front of the screen.

Verdict Yes I remembered it a little easier Comment The Old Hunters certainly will not change their minds to the detractors of Bloodborne and more generally to those who do not like the exponents of the Souls series. The expansion in fact fits into the same groove as the base game, inheriting its strengths and buffering some of the defects, which still remain in the background of Yharnam. In any case, it is a more than worthy expansion for one of the most solid experiences of this 2015, capable of adding a lot of variety (especially in terms of weapons) and seasoning everything with an excellent level of challenge, especially for the "prodigies. "who had momentarily put the work of From Software aside. Pros and cons ✓ Great level of challenge
✓ Lots of new weapons
✓ Artistically guessed ... x ... But with some stumbling
x If you didn't like Bloodborne, you won't change your mind
Do you want to be a video game expert and know all the tricks, guides and reviews for your video games ? Holygamerz.com is a group of video game fanatics who want to inform you about the best tricks, guides and tips. We offer you the best information to be a reference in gaming, so here you can find guides, tricks, secrets and tips so you can enjoy your games to the fullest. Are you ready to get all the achievements of that game that you resist so much? Enter now and enjoy your favorite video game to the fullest!
Nights of Azure review ❯

Add a comment from Bloodborne Review: The Old Hunters