Best video games coming out in 2020

This year so far it has already given us some excellent titles. Let's find out the roundup of the best video games coming out in 2020!

This start of 2020 has left us a little bitter in the mouth due to some unexpected postponements. But there is a lot of meat on the fire and the expectations are very high. A large number of big titles are on the way and we can't wait to get our hands on it. Plus this will be the year of the new Sony and Microsoft consoles and we're sure both of them will want to get off to a great start with titles that will leave us breathless. let's find out together then which are the best upcoming games that will accompany us during this year.

Let's quickly retrace the titles of 2019: a year full of surprises and great returns

2019 has been a great year for video games that has left us with some great titles. Just think of Sekiro: Shadows Die Twice, fresh winner of the game of the year at the Game Awards consecrating definitively (as if there were doubts) From Software among the greats in the sector. This year marked the comeback of Hideo Kojima, for the first time away from Konami, with the much discussed Death Stranding. Not to mention Control and Days Gone, two really valid titles but perhaps still too underestimated by some of the public.

We cannot fail to mention a great remake like Resident Evil 2 or Devil May Cry 5 with a Capcom that doesn't miss one. But not only that, 2019 was a year that reserved some for us unexpected surprises. We are talking about Disco Elysium, an RPG that many were not aware of, but arrived on everyone's lips after the great success in the review. We can only hope that 2020 will live up to expectations. Will he make it? Well, the potential is all there! 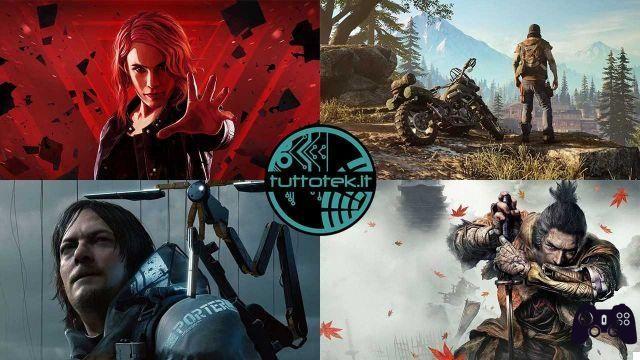 After The Witcher 3 everyone is looking forward to the new CD PROJEKT RED project. The Polish software house has now earned it the fame of one of the most talented houses in the market. Cyberpunk 2077 is an RPG with the much-discussed first-person view. The game takes place a few years after the paper role-playing game Cyberpunk Red recently released. From the point of view of the characterization of the game world it seems to be flawless, we are sure it will not disappoint.

We cannot fail to mention the most anticipated games of the year without mentioning the Call of Duty saga. If last year the new course of the Modern Warfare trend brought the saga back among the greats, with Cold War a new consecration could arrive. With the sure support of Warzone, the Treyarch guys were able to concentrate on the single player campaign, which seems particularly accurate and promises a interesting reconstruction of the cold war, besides of course the usual great action scenes.

The new course of the Assassin saga brought us first to Egypt and then to Greece. This time it takes us directly to Northern Europe, to the war between the Viking people and England. Ubisoft promised a interconnected world with a well-integrated narrative in the context. We can only be curious about this new iteration given the great charm of the proposed setting. The gameplay will resume that of the previous chapters, with one action structure contaminated by many RPG elements.

The great PS5 launch title cannot be missing from this list. It is certainly one of the most anticipated titles of the year, especially by all fans of From Software's Souls. Developed by Bluepoint, Demon's Souls Remake promises to bring back the original experience that for the first time conjugated the formula we all know. However, there will be some changes to make the game more modern and attractive. Unmissable for all those who love From Software titles, but who have not yet recovered this title that at the time passed on the sly to the general public.

With the launch of PS5 Miles Morales takes the place of Peter Parker as Spider-Man. It is a DLC stand alone, which is a game that can be purchased separately, but which is based on the structure and assets of the original game. The game will take advantage of many of the unique features of the new Sony home console such as the ray-tracing and the speed of the SSD for virtually instant uploads. The PS5 next-gen will open with one of the strongest brands in his possession, will Spider-Man: Miles Morales be able to withstand the weight of expectations?

The first chapter was one of the surprises of 2018. Then came the acquisition by Microsoft, and with it probably much more resources. The journey inside Senua's mind is something that only video games can do. We expect Senua's Saga: Hellblade 2 to maintain the emotional power of the first chapter with a deeper and more layered gameplay. Also, the first chapter was heavily used dell’audio binaurale to convey the sensation of hearing voices in your head. We hope this technique will be enhanced even more in Hellblade 2.

20 years after the second episode, the saga returns classic role-playing games inspired by Dungeons and Dragons. Developed by Larian Studios, Baldur's Gate 3 is particularly inspired by the fifth edition of D&D. The combat system a turni allows the player to decide how to best use the abilities of their party. Furthermore, for lovers of numbers it will be possible to see every single die roll that the game makes for the actions of our characters. If the developers manage to combine an evolution of the Divinity: Original Sin 2 gameplay with a high-level writing inspired by the lore of Baldur's Gate we could really have a masterpiece in our hands.

This is the first video game announced on PS5 which, most likely, will be released when the console is launched. Godfall is an action RPG, defined as “looter-smasher” by the developers. The gameplay seems to have potential as well as the art style which, while not entirely original, could be really well done. It's up to the developers to make the most of their cards, being a new IP, we hope it will be successful and immediately show everyone what it will be possible to do in the next-gen.

One of the most anticipated PlayStation exclusives for this new generation of consoles. Ratchet & Clank: Rift Apart is one of those games that is making us dream of the next-gen. In fact, the very fast loading of the SSD allowed to create the mechanics of the portals. The latter will allow the two protagonists to move between different dimensions in a manner almost instant. Furthermore, the graphic level reached by Insomniac is really stunning, with an amount of on-screen objects that only new hardware can afford.

Best video games coming out in 2020: The Legend of Zelda: Breath of The Wild 2

It is impossible not to include the sequel to one of the best games of recent years. The first chapter left everyone speechless for his chemical engine, making any idea that the player could come up with achievable. The Legend of Zelda: Breath of The Wild 2 will feature decidedly darker tones, a great cataclysm seems to have struck Hyrule. Nothing is known about the game's release date yet, but this could be there Nintendo's trump card to counter the advent of new consoles from Microsoft and Sony.

Hands to your wallet… And have fun!

This was a long rundown of the best video games coming out in 2020. These are very valid and above all very highly anticipated titles. I hope this guide hasn't increased your hype about these games too much. But one thing is certain, all these games will give us a lot of fun and at the same time make us shed tears that will end up directly in our increasingly empty wallet.

To stay up to date on all the news and news from the videogame world and beyond, keep tuned to Holygamerz.

Minecraft: how to find a Heart of the Sea and make a Conduit ❯

add a comment from Best video games coming out in 2020