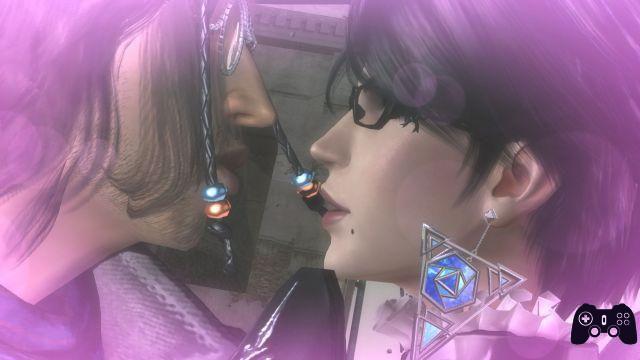 Having reached the third in-depth study and after having talked about the battle system and Bayonetta's equipment, this time we dedicate our attention to a new one for the series: online multiplayer.

One of the biggest news of Bayonetta 2 compared to the first chapter, at least on the content front, is the introduction of an online multiplayer mode, called Double Apotheosis. It is essentially a cooperative mode for two players, but there is also a sort of "challenge within the challenge" that winks at a more heated competition, albeit indirect.

Character, costumes, accessories and weapons. Each choice must be weighed carefully

Before launching into the heart of the battle, the player can choose at will how to present himself on the field: in addition to the character (in fact, the protagonist will be joined by other cast members, such as Jeanne) and to the costumes (to which we dedicated ample space in the last preview ) it will in fact be possible to choose between the paraphernalia accumulated during the campaign and one's own equipment, from weapons to accessories. Unlike the solo experience, you will have only one set of weapons available, which will therefore be chosen carefully both in terms of the series of challenges that will be faced and the affinity that the player has with them. Once done, you will access the main hub of the mode, being able to choose whether to try your hand at a quick game (being paired with another random player or sending a request to a "waiting" friend who is playing with the CPU), search a companion among those online or playing with the CPU (in this case personally choosing the ally's character and equipment).


The heart of the cards

Once you've chosen your character and ally, it's time to choose your enemy and battlefield. The selection takes place through a peculiar "tarot" system, in which each card corresponds to a certain scenario (usually taken from the single campaign) and to a series of opponents, ranging from a varied number of angels and demons up to real boss fights. Since these are playing cards, a certain gambling component could not be missing: you can increase the difficulty level of each challenge by aiming your halos until you reach three stars (the maximum risk level). In case of defeat these will be lost, while in case of victory they will increase the sum brought home thanks to a bonus given to the player who has obtained the best results and dealt more damage to enemies. However, in order to bring home all the loot it is necessary to go through a series of six challenges, completing them without incurring the game over (thus avoiding the simultaneous death of both players and, possibly, reviving the companion on the ground within the time limit) and being careful to carefully manage health and magic, which will not be restored at the end of each battle but will be preserved between one "card" and another.

The other insights on Bayonetta 2:


Comment The Double Apotheosis mode, in addition to offering a damn quick way to accumulate halos to spend at Rodin's Gates of Hell, is one of the most notable additions to the first chapter of Bayonetta. The "cooperative but not too much" approach and the number of scenarios available is capable of guaranteeing entertainment almost at the level of the main experience, thanks to the possibility of challenging (albeit indirectly) your friends. Pros and cons ✓ x

Do you want to be a video game expert and know all the tricks, guides and reviews for your video games ? Holygamerz.com is a group of video game fanatics who want to inform you about the best tricks, guides and tips. We offer you the best information to be a reference in gaming, so here you can find guides, tricks, secrets and tips so you can enjoy your games to the fullest. Are you ready to get all the achievements of that game that you resist so much? Enter now and enjoy your favorite video game to the fullest!
News + Pokémon GO teaches loot boxes ❯

Shadow of the Beast preview