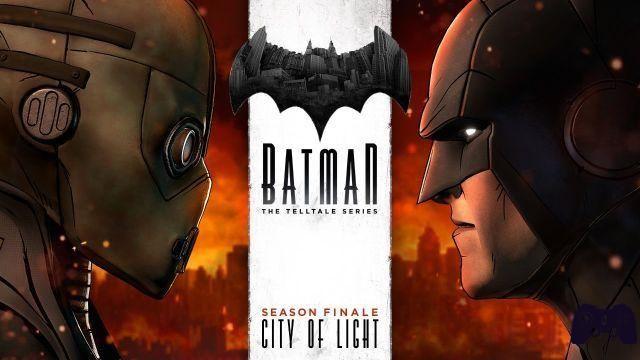 That of Batman's Telltale it was a smooth ride that lasted five months. Since the beginning of August, the Gotham of the alternate world of the team behind The Walking Dead has involved us with reinterpretations of iconic characters and a plot functional to growth as a hero and as a man of Bruce Wayne. December 13 was the release date of the season finale of Batman The Telltale Series, Entitled City of Light. As for the previous episodes, this fifth episode is also available in stand-alone or via season pass on PlayStation 4, PlayStation 3, Xbox One, Xbox 360, PC and Mobile devices. Will the fifth chapter be able to prove itself valid and to conclude this first season worthily?

As usual, in the City of Light Review there will be spoilers of the four previous episodes, also to be able to pull the strings of all the events and give a global judgment to this first season. Revelations on the plot of this season finale will be reduced to a minimum.

The start of City of Light will be different depending on whether you decided to protect the Wayne Enterprise by defeating Penguin, or whether you faced Harvey Dent hard to defend Villa Wayne during the final act of Guardian of Arkham. As expected you will be called to rush to the rescue of the other location, now severely damaged, to put an end to the issues with the opponent being placed in the background. Excellent choice of Telltale to tell the past of the antagonists through flashbacks, going to improve even more the characterization of this alternative world. After a great start, City of Light runs without brakes for about two hours, closing all the plots related to the Sons of Arkham. What is Lady Arkham's plan? Batman will have to close his accounts once and for all and save Gotham from destruction.

City of Light enjoys a fast paced storytelling of events, slowly focusing on each of the main characters and giving Bruce Wayne the ultimate push to become the hero Gotham needs. The development of some of the billionaire's personal relationships is also excellent, especially those with Alfred and Selina, although the game dialogues also focus on psychological interaction with opponents.

The Best Detective in the World: Season Finale

Although, in addition to the dialogues already mentioned, there is no lack of QTE battles, City of Light gives great space to the investigative side of the series dedicated to the Dark Knight. There will be more than one place to investigate and connect clues, while also favoring the quieter side of the gameplay. Telltale throughout the season has not forgotten that, in addition to being a superhero capable of inspiring fear to his opponents, Batman is also the best detective in the world, and he proved it by giving more space to this side of Bruce Wayne. Unfortunately, the difficulty of the investigations is practically nil, going so as not to affect the rhythm of the story, but making the entire production very little playful. City of Light still manages to be enjoyable and to end this five-month run in an excellent way, even from the interactive side thanks to quick action QTE during the brawls between Batman and his opponents. 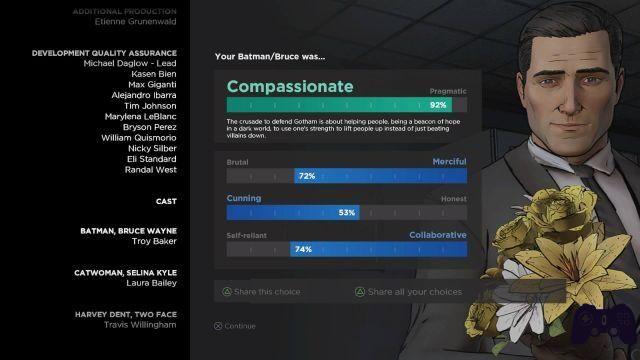 Finally, during the credits, the sums of all the choices made during the five episodes will be summed up, which will affect the evaluation of your personal Dark Knight setting, hopefully, the foundations for a future second season.

If over the months you have read the reviews of the four previous episodes, you will know very well that the biggest flaw of Batman - The Telltale series is a fluctuating technical sector that shows the side with the dancing and often frustrating framerate. City of Light is sadly no exception, and the game slows down in numerous sections, although the most obvious bug is a missing model in the Arkham scene, replaced only by teeth and eyes. This may all sound funny, but given the episode's short duration it was easily avoidable. 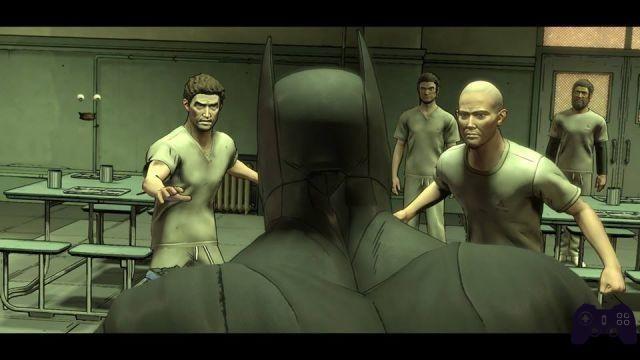 Nothing to report on the dubbing, always excellent (with a practically perfect Troy Baker), and on the soundtrack capable of making the right atmosphere in the most tense situations. A real shame that a successful audio sector must be accompanied by a slightly less stable technical one. City of Light, like previous episodes, is only available in English, both in audio and in lyrics.

Verdict 8/10 Time to announce the second season, right? Comment While taking into account the technical problems, City of Light manages to be promoted and put an end to this (hopefully) first season dedicated to Batman. Telltale convinces with an alternate universe that tells the evolution of Bruce and especially his enemies, leaving satisfied both the long-time hooded Crusader fan and the newly arrived one. At the end of the season we feel happy with this project, although the debut of the new graphics engine was not the best. We hope that in the next works of the team (The Walking Dead 3, Guardians of the Galaxy) attention will also be paid to this aspect. Pros and cons ✓ Successful characterization of the characters
✓ Fast pace until the end
✓ Good sound sector x Framerate dancer

Do you want to be a video game expert and know all the tricks, guides and reviews for your video games ? Holygamerz.com is a group of video game fanatics who want to inform you about the best tricks, guides and tips. We offer you the best information to be a reference in gaming, so here you can find guides, tricks, secrets and tips so you can enjoy your games to the fullest. Are you ready to get all the achievements of that game that you resist so much? Enter now and enjoy your favorite video game to the fullest!
Guides How to defeat all Bosses and tips - Cyberpunk 2077 ❯

Add a comment from BATMAN review - The Telltale Series Episode 5: City of Light