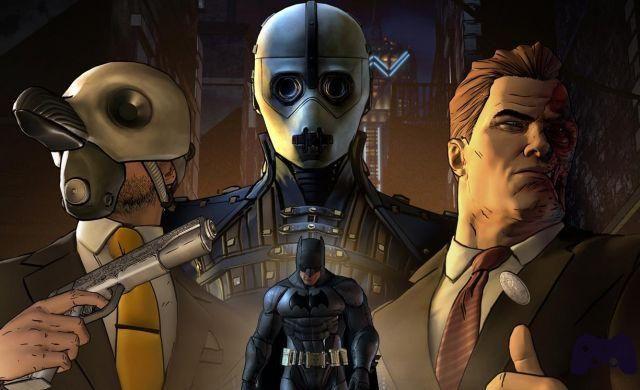 A little more than a month after the fateful moral choice that concluded the second episode, Telltale released the third installment of Batman - The Telltale Series, Entitled New World Order and turning point for the series dedicated to the hooded crusader. Available via the Season Pass or individually, New World Order is available for purchase on PlayStation 4, PlayStation 3, Xbox One, Xbox 360, PC and mobile devices.

Given the amount of situations in the past episodes, it is now impossible for us to avoid not mentioning the events that happened in Realm of Shadows and in Children of Arkham. Reading the review is recommended for those who have already played the previous episodes, and we assure you that there will be no spoilers of the twists of New World Order.

During New World Order, Bruce will have to deal with the moral choice that ended last episode, whether you saved Selina from the fire of the shooting or prevented Harvey Dent from disfiguring the young Penguin, the events of this third episode will take somewhat unpleasant folds for the Gotham billionaire. The third episode is a succession of events, which will drag the player towards a successful cliffhanger and a twist that could displace him. Telltale is telling the characters of the Batman universe in its own way, taking advantage of the Children of Arkham and making Bruce more and more human, both in his relationship with Selina and in his friendship with Harvey. And it is Dent who occupies the most space in New World Order, completely changed after the attack on the debate (physically or internally it depends on your choice) is a man brought to the limit and ever closer to collapse. This third episode is calmer than the previous ones (and perhaps even slightly shorter), but with a single battle, it manages to charge the player with adrenaline, setting in motion the events that will trigger the final part of New World Order.

Even with New World Order, Telltale wanted to focus on Bruce Wayne, relegating Batman to two sections of the entire episode, and continuing to insist on the human aspect of the character. Still struggling over his father's morale, Bruce will face more threats as he investigates the aims of the Children of Arkham and their mysterious leader. As we have already repeated in the past, given the genre of titles developed by Telltale, focusing on Bruce is the wisest, and at the time successful, choice to engage the player in the universe of the hooded crusader. There is no shortage of adrenaline moments, in which thanks to the QTE you can lead your hands to defend Gotham, once again the action is well represented, making it engaging to watch.

Unfortunately, if from the narrative side New World Order is solid and compelling, this third episode collapses again from a technical point of view. Numerous slowdowns, often unjustified, afflict the almost two hours of play, making everything more mechanical and less enjoyable than it actually should be. The main problem of frame drops mainly concerns movies, moments of the game in which a title of the genre should not struggle. Nothing to report instead regarding the English dubbing and the soundtrack, as excellent as before.


Verdict 7.5 / 10 There is a piece that is practically in Power Point ... Comment BATMAN- The Telltale Series continues with New World Order and shows no signs of stopping its run, thanks to a succession of events that will bring the alter ego of the Caped Crusader towards an unexpected cliffhanger. Excellent work on the characters, on the dubbing and on the music, while the only drawback of the production remains the technical sector, which continues to trudge scene after scene with heavy drops in framerate. Now at the halfway point, we are faced with three very solid episodes and one of the team's most successful series: let's just hope it doesn't crash right now. Pros and cons ✓ Well narrated plot
✓ It keeps the attention high
✓ Successful stages of action x Still persistent frame drops

Do you want to be a video game expert and know all the tricks, guides and reviews for your video games ? Holygamerz.com is a group of video game fanatics who want to inform you about the best tricks, guides and tips. We offer you the best information to be a reference in gaming, so here you can find guides, tricks, secrets and tips so you can enjoy your games to the fullest. Are you ready to get all the achievements of that game that you resist so much? Enter now and enjoy your favorite video game to the fullest!
Guides How to get Mario series items and update - Animal Crossing: New Horizons ❯

Life is Strange: Before the Storm review - Goodbye