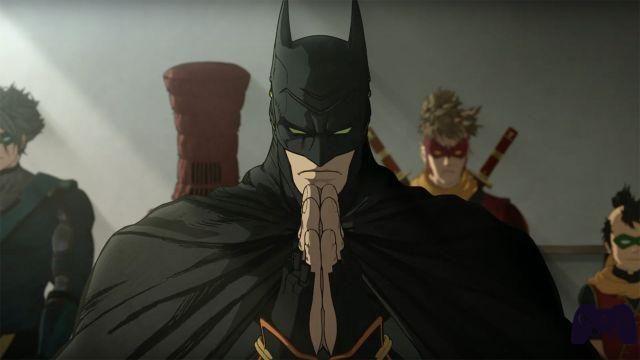 What happens when we combine Japanese and Western animation styles?

Well, one of the most convincing and meaningful answers to this question we managed to find in Batman Ninja.

We had already had the opportunity to preview it during the XX edition of Napoli Comicon, but we decided to tell you about it only now in conjunction with the release in Spanish on all the most popular digital platforms, which will take place starting from 7 September. Produced by Warner Bros. and directed by Junpei Mizusaki, Batman Ninja is the result of the fusion of an American character with the style and narrative typical of the land of the Rising Sun.

A batman from another era

The narrative begins in medias res, catapulting the viewer into a clash between Batman and Gorilla Grodd inside Arkam Asylum. The well-known protagonist of DC Comics, during the battle, however, will suddenly be transported to feudal Japan. Two years behind his allies, he will discover that he is not the only one who has traveled through time. In this way we will find among our allies the faces of Nightwing, Robin, Red Robin, Red Hood, Catwoman and Alfred, while populating the ranks of the villain characters such as the Joker, Harley Quinn, Two-Face, Penguin, Poison Ivy, DeathStroke and the Gorilla himself Grodd.

Batman's bitterest enemies, taking advantage of their knowledge and the historical period in which they find themselves, they will manage to take control of Japan in those years. Although the narrative is often too hasty and at times even devoid of original elements, there is no shortage of twists and extraordinarily engaging moments, capable of keeping the viewer glued to the screen for the duration of the film.

The fights remind us at all times of those we have been used to by anime and manga shonen of all kinds, with elements that are sometimes exaggerated but which have characterized the success of the last decades. The character design work by Takashi Okazaki, well known for Afro Samurai, is nothing short of amazing. The references to his previous work are evident, to the point that more than Batman Ninja we should have talked about Batman Samurai. Despite this, characters like Joker (who really remembers Kefka from Final Fantasy VI), or that of Robin are represented in a characteristic, unforgettable and sublime way. What we have on the screen are three-dimensional characters on hand-drawn backgrounds, in a combination that wisely showcases various styles of the Japanese tradition and with a result that never disappoints.

As a modern day Gurren Lagann, and this was to be expected when we consider that the original script was written by Kazuki Nakashima, Batman Ninja is permeated with exaggeration throughout the entire film. Because of this, there will be no lack of trash elements that cannot fail to elicit at least a laugh from the viewer. There will be so many moments of this type that it will be nothing short of impossible not to think that in reality we wanted to create a parody of what are the cornerstones of classic Japanese animation. Consequently, between no-sense, trash and exaggerations of various kinds, we will see fights between robots, between ninjas, between samurai and between good and bad in a way that was really difficult to imagine. The unimaginable, however, is followed by fun and exaltation in a pure state, so much so that you will not be able to help but exalt yourself.

Of Batman Ninja we had the opportunity to see both the original language version, subtitled in Spanish, and the one dubbed directly for our country. As Leo Chu and Eric Garcia themselves admitted they did for the US release, the plot between the two films has been changed. The images will obviously be the same and, although the writers claim that the dialogues are 90% different, the underlying sense of what happens will remain unchanged. However, it will not be so strange if you want to see what is the original edition, which is why iTunes (and presumably all the stores on which it will be released) offers the possibility to watch the film in Japanese language with Spanish subtitles.

Last, but not least, is the work done by Yugo Kanno in the creation of the soundtrack of the film, which wonderfully accompanies every second of this film.

Do you want to be a video game expert and know all the tricks, guides and reviews for your video games ? Holygamerz.com is a group of video game fanatics who want to inform you about the best tricks, guides and tips. We offer you the best information to be a reference in gaming, so here you can find guides, tricks, secrets and tips so you can enjoy your games to the fullest. Are you ready to get all the achievements of that game that you resist so much? Enter now and enjoy your favorite video game to the fullest!
Guides Guide and talent advice - Assassin's Creed: Valhalla ❯