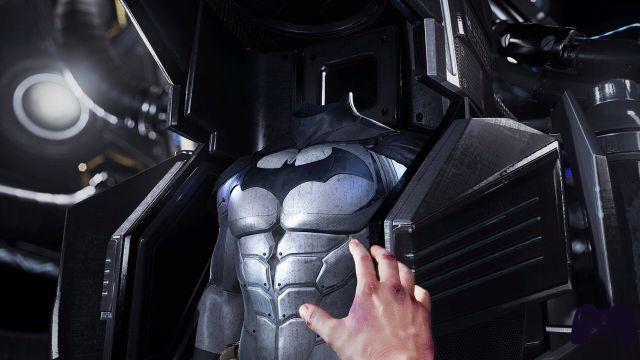 With the passage of time it is inevitable that video games change and that, consequently, gamers also change. With the advent of virtual reality (with all the pros and cons of the case) the time has come for us editors to also change the style with which to write reviews for this particular type of product. For titles like Batman: Arkham VR, for example, we realized how impossible it is to give a completely objective judgment as positive elements such as identification or negative elements such as motion sickness are completely subjective and cannot be evaluated as absolute. . Here, therefore, we invite you to read these new reviews dedicated to VR titles even more carefully and we remain at your disposal for any question / doubt / hesitation or perplexity. Enjoy the reading!

What the boys of Rocksteady have succeeded in the arduous task of presenting on the market the best version of Batman in many years it is now a fact. In fact, no other media has managed to render the atmosphere of the Dark Knight so well and to find something equally high in quality we must most likely go back to the animated series of the 90s created in collaboration with Bruce Timm. After Arkham Asylum, Arkham City (which will be collected in a collector's edition coming out this week), Arkham Origins (developed by Warner Bros. Games Montreal) and Arkham Knight, the British team has taken its first steps in the reality market virtual with their latest creation which takes the name of Batman: Arkham VR. Will they have succeeded in making us live an experience at the level of their previous productions or will it be a first false step? Before we find out in our new review, we remind you that Batman: Arkham VR is available exclusively in digital format for € 19.90 as the physical edition, also initially scheduled for 13 October, does not seem to have reached any store and even those who had booked it saw their order moved to a later date.

La plot di Batman: Arkham VR ranks exactly after the end of Batman: Arkham City and before the start of Batman: Arkham Knight, putting us (literally) in Bruce Wayne's shoes and making us investigate the mysterious disappearance of Robin and Nightwing. After wearing the armor, gloves and mask of the Dark Knight, we will be able to access the Batcave from which to manage our operations and which, acting as a hub for the various activities of the title, will also allow us to analyze vehicles and characters on a 1: 1 scale of the Rocksteady saga. In any case, the plot created by the British development team manages to capture the player's attention and add an important piece to the understanding of some choices made by Batman at the beginning of Arkham Knight, also managing to insert into the story some characters that fans of the series will not be able to but appreciate. It must be admitted, however, that the weakest point of the whole production is its longevity which, to end the story, it settles around the hour / hour and a half. Once the first run is over, however, the classics will be activated challenges of the riddle which, in order to be found and completed, they will be able to increase the duration by a couple of hours, bringing Batman: Arkham VR to be 100% completed in 3/4 hours. Here, then, now emerges the subjective factor that we indicated in the initial paragraph: the experience offered by this latest Rocksteady production is something simply immersive and we are sure that, even once you have finished any action in the game, you will find yourself wearing the headset again to “be Batman once again”. The naturalness with which the various game actions are developed and the possibility of seeing everything from the eyes of the Dark Knight alone are worth, in our opinion, the price of the title; because seeing the real dimensions of a Batmobile or a Killer Croc are things that you will hardly be able to forget.

The greatest detective in the world

Batman: Arkham VR is an investigative title that favors exploratory sections rather than action sequences

It gives a playful point of view, Batman: Arkham VR is an investigative title that favors the exploratory sections rather than action sequences. Once our trusty is dusted off Move, we will find ourselves using them as if they were the hands of the Gotham vigilante and, by pressing the two triggers, we will be able to collect the objects scattered around the various areas and use them to solve the multiple environmental puzzles. Looking down at Batman's belt, however, we can find the three main objects to be used during the campaign: the batarangs, which can also be used in a mini-game in full "target shooting" style; the grapple, useful to attract some objects to us and to reach the most distant places e the forensic scanner, to study the areas and discover all the secrets hidden from view. These three tools turn out extremely intuitive to use and, after a few minutes, everything will be so automatic as to make the experience even more immersive than you could hope for. An experience that, however fascinating, it is never really challenging and that it will hardly know how to put the player in difficulty, thus favoring the fluidity of the storytelling, but harming those who look for complex puzzles to solve from a title of this kind. A special applause, however, to the challenges of the Riddler which, as in the other chapters of the series, are divided into search for various trophies (this time in a different and cubic format), in the solving puzzles and in 'alignment of the "dots" of question marks with the rest of the symbol. To further increase longevity they have been included in the levels of objects to destroy (18 hidden targets, cameras and electrical switches) that will surely delight all lovers of exploration and those who want to experience a few more moments in the role of the Bat Man. Finally, we highlight how there is no platinum trophy for this title, but like some other objectives to be achieved to win the (few) trophies are fun at least as much as the aforementioned Riddler challenges.

Batman: Arkham VR is beautiful to see and hear

Graphically Batman: Arkham VR looks like one of the best titles for the new Sony headset. This is thanks to a polygonal modeling of the characters more than satisfactory which, when combined with the wonderful game atmosphere, allows the player to immerse himself perfectly in the adventure. The sound sector is also excellent that, though lacking dubbing in other languages characteristic of the regular series (don't worry, there are subtitles anyway), it manages to convince in every aspect, complete with peaks towards the top as regards the increasingly spectacular work of Mark Hamill as the Joker. For what concern Motion sickness we have to admit to not to have been affected at all, despite some particularly intense sessions lasting more than two hours.

Verdict 8/10 You will surely be a better Batman than Clooney! Comment Batman: Arkham VR is one of those titles that you don't remember playing, but you remember living. The identification is handled to perfection and the controls are so intuitive that it will only take you a few minutes to forget real life and focus on saving Robin and Nightwing. Too bad that the not particularly high longevity slightly minimizes the entire production, preventing it from reaching a higher rating, but Rocksteady's efforts to insert a series of secondary challenges to increase the hour counter once the main adventure is over are still commendable. . However, if you are a fan of the Bat, you can easily raise the rating bar by one point, as you will never again see your favorite characters in 1: 1 scale and experience an adventure as the Knight. Dark. Surely we are facing one of the best productions available at the launch of PlayStation VR and we would like to recommend the purchase to all owners of the new Sony viewer, whether they are fans of the character created by Bob Kane and Bill Finger or "simple" users of videogames. Pros and cons ✓ Dizzying atmosphere
✓ Excellent direction
✓ Extremely intuitive gameplay
✓ Total identification
✓ Convenient price x Unfortunately it ends soon
x Not high difficulty
Do you want to be a video game expert and know all the tricks, guides and reviews for your video games ? Holygamerz.com is a group of video game fanatics who want to inform you about the best tricks, guides and tips. We offer you the best information to be a reference in gaming, so here you can find guides, tricks, secrets and tips so you can enjoy your games to the fullest. Are you ready to get all the achievements of that game that you resist so much? Enter now and enjoy your favorite video game to the fullest!
Art of Rally review is pure poetry in motion ❯