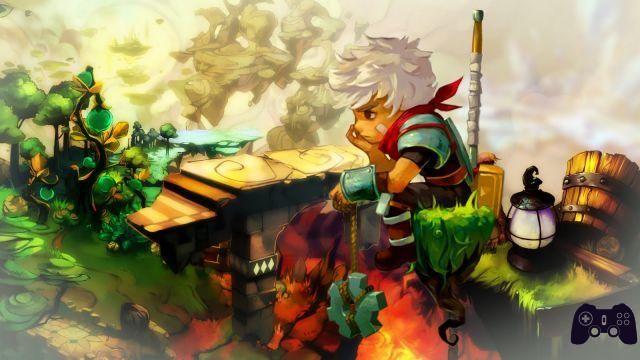 In 2011 the indie scene began to take over triple A productions, giving away real playful pearls and leaving indelible marks in the memory of the players. Supergiant Games he made his way on PC and Xbox 360 with a title that garnered acclaim from both critics and the public: Bastion bewitched by the atmospheres and the intuitive gameplay, but also for a simple but at the same time compelling plot and a graphic style to leave you speechless.
Four years later, strong from the success on PlayStation 4 di Transistor, Supergiant Games asks for the support of Blitworks, a group of developers who handled the conversions for Sony's new home console Fez e Do not starve, to bring Kid's adventure to those shores too. Will Bastion be worth buying after four years? Will the little independent gem have managed to stay fresh and varied as in its debut?

By the end of 2015 the PlayStation Vita version will also be available via cross-buy, at the moment Bastion can only be purchased by PlayStation 4 users at a price of € 14,99.

Of Bastion and Calamity

The plot of Bastion is simple but at the same time effective and captivating: a calamity has struck the world that has transformed 99% of the population into stone statues and destroyed practically every place leaving debris scattered in the sky. Kid, the white-haired boy protagonist of the title, wakes up in what remains of his neighborhood and armed only with his trusty Hammer of Cael, he decides to reach the Bastion and find out if there is any other survivor. Here he meets Rucks, the narrator who will accompany you throughout the game, revealing twists and comments on every action of Kid with a sarcastic and deep voice.

Bastion's storyline is simple but captivating

It takes about five hours to complete Bastion, but the longevity is doubled thanks to the second finale, the challenges at "Who Knows Where" (waves of enemies with Rucks in the background telling the protagonists' past) and the Time Attack mode ( added to previous versions via a free update), if you aim for 100% the Supergiant Games title manages to reach twenty hours, thanks also to the idols of the temple that increase the game difficulty making Kid's misadventures more tough than necessary.

Armed to the teeth

Bastion is an Action RPG with hack 'n slash mechanics: Kid will have two slots for weapons, one entrusted to Square and one to Circle, during his adventure the boy will find ten tools of death (divided into firearms and physical) to equip to the player's taste. As logical to think, every weapon has its strengths and weaknesses, the choice of which to use is therefore influenced by various factors such as the enemies we will face (some are more vulnerable to one weapon than another) or the alcohol tonics equipped. at the distillery (we'll talk about it shortly). Each weapon can be upgraded up to five times at the Bastion, using the necessary materials collected during Kid's travels or by passing training tests (one for each weapon).
Supergiant Games meets everyone, providing ten different styles of play with which to defeat Squirti, Stercoteri and Ura, thus making the actual gameplay of the title varied: with theArch of the Messengers you can make precise and lethal shots, with the War machete you can physically and quickly damage opponents and with Dueling Guns you can unload a barrage of bullets on the unfortunate monsters (and they are just three examples of the weapons supplied to the Kid). R2 is instead entrusted with a special ability, usable only when in possession of black tonics, which will cause serious damage to enemies or increase Kid's defenses; with Triangolo the young man will heal himself using the health tonics while for the defensive maneuvers we find him Shield of the Restoration on L2 (which used at the right time will allow a counterattack) and with X a classic dodge.

In addition to the improvement of weapons, Bastion's role-playing component affects Kid's experience levels: with each action completed, enemy defeated or test passed, the boy will receive a certain amount of experience points (which can be increased in percentage thanks to the aforementioned idols) and will be able to climb up to a maximum of ten levels, each of which will unlock a new slot in the

distillery, and will be able to equip himself with liquor that can give bonuses such as a more powerful counterattack, a chance to come back to life once defeated and much more. Bringing Kid to the maximum level will be useful to better face the waves of Who Knows Where, managing to survive even the most difficult challenge (the one dedicated to Rucks).
With an intuitive and still fresh gameplay after four years, Bastion manages to adapt to any type of player, offering a 'rich and complete gaming experience.

Also visually and from the point of view of the sound Bastion it remains virtually the same title as in 2011, although on PlayStation 4 can take advantage of 1080p that give added value to painted backgrounds and artwork, and gods 60 fps, without any decline even in the most excited moments. The soundtrack gives emotions both for the original songs (Build that Wall for the note), and for the background songs to the epic battles of Kid. The voice actor of Rucks manages to surround the player with his deep voice and well-written dialogue, although he limits himself to describing the situations in which the white-haired boy will face. Some problems in the Spanish translations of the texts, including small typos, but nothing that makes the title incomprehensible.

Verdict 9/10 The Bastion and the Carrot Comment Bastion debuts in 1080p and 60fps on the Sony flagship, giving the same emotions it gave in that distant August of 2011. With the help of BlitWorks, Supergiant Games packs a successful porting and a must for those who have not yet played this pearl of the independent panorama. The absence of any extras to this edition of the Supergiant Games title will probably stop those who have not loved it madly in previous incarnations or who do not want to re-face the adventure of Kid from the purchase. Pros and cons ✓ Excellent Audio / Visual sector
✓ Very long-lived
✓ Convincing plot and characters x Nothing new compared to previous versions
Do you want to be a video game expert and know all the tricks, guides and reviews for your video games ? Holygamerz.com is a group of video game fanatics who want to inform you about the best tricks, guides and tips. We offer you the best information to be a reference in gaming, so here you can find guides, tricks, secrets and tips so you can enjoy your games to the fullest. Are you ready to get all the achievements of that game that you resist so much? Enter now and enjoy your favorite video game to the fullest!
Heavy Rain's Deadly Sins Special - Plot Hole and Suspension of Disbelief ❯

Shadows of the Damned review