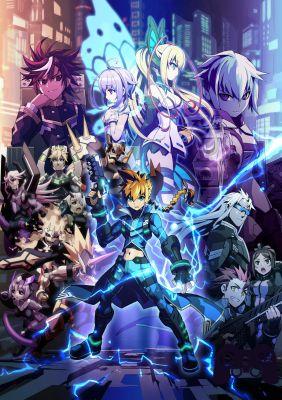 European players have a great quality to be recognized: patience. Usually, when it comes to Japanese productions (except for sporadic episodes of "triple A" titles) it is always the case to take into account long waiting times between certifications and various adaptations. Yet another victim of this almost endless process is Azure Striker Gunvolt, last effort of Inti Creates (historic team famous for the series Mega Man Zero) that delights us with a new side-scrolling platform, in which he also appears as an executive producer Keiji Inafune, the “father” of Mega Man. With a pedigree of this caliber, will the wait for Azure Striker Gunvolt be worth it? Find out with us.

It would have been too simple and obvious for the creators of Mega Man Zero to expect a clone of the Capcom title. And let's face it, we would have been satisfied after all. Instead, although the general inspiration is great, the air you breathe playing Azure Striker Gunvolt is new and fresh.
Set in the not too distant future, the title Inti Creates sees us as protagonists of a suicide mission that aims to save the world. A corrupt world ruled by a powerful multinational, Sumeragi, which controls every single aspect of human life. However, it happens that in this future they have developed in some subjects (called Adepts) of powers Septimali able to awaken incredible abilities that allow you to perform gestures beyond human understanding. Adepts are seen in the world with fear, and it is here that Sumeragi, pretending to protect them from the oppression of other people, begins to perform terrible experiments on them with the aim of gaining more power and conquering the whole world. At this point we come into play, or rather Gunvolt, that by the hand of Quill, a terrorist organization that wants to dismantle the Sumeragi Group, we will have to try to put an end to the terrible experiments and expansionist aims of the group.
If the incipit of the story convinces, with a nice setting and perfectly characterized characters right from the start, where the story gets lost is in its development. The nature of Azure Striker Gunvolt is that of a title destined for the digital market, and as such its duration is also quite limited. This implies the lack of a narrative background at times almost necessary within the story, as well as a greater space for some enemies that we will meet during the adventure and that we will have to face without too many preambles, pushing the plot into the background without deserving due attention.

That electricity through his body

Where, however, Gunvolt recovers many points is in its gameplay, which has its roots in the classics of the genre of the 90s (Mega Man Zero above all) but succeeding in the task of rejuvenating that model, in an operation similar to what happened in Shovel Knight. The structure is the basic one of the 2D side-scrolling platform. We face the level, usually in a fairly linear way and, without too many creative impulses in terms of level design, we fight the enemies along our path, coming to face the boss in a usually quite challenging battle. Azure Striker Gunvolt breaks the gun system tradition of this type of games, proposing a solution that at first may seem simplistic but which hides within it a deeply rooted depth. Gunvolt has a gun to attack. You shoot using the dedicated button and each shot will consume a part of the enemy's energy. So far nothing new under the sun. The novelty is that the gun will not be the most appropriate means to eliminate the enemies: as an adept he will be able to exploit his Septimal powers and make use of theElectrosphere, an electric field capable of inflicting damage. Using the pistol, one shot will be enough to mark the enemy, and once locked, launch the attack with the Electrosphere to eliminate it. The gun can be equipped, once unlocked during the adventure, with new bullets, each with its own characteristics that will allow us to increase the number of markings that can be carried out at the same time or vary the type of shot with self-tracing shots or piercing volleys.

Gunvolt also has some offensive and support skills

The Electrosphere will be managed by a special bar, which if consumed and brought to 0, will send our protagonist into mode Burnaut and will not be able to use skills that require their use. To recharge it, just wait a few seconds or more quickly by pressing the "down" key on the directional cross twice. The Electrosphere then will not be used only to attack but can also be used in platforming and if activated it will allow Gunvolt to glide or remain suspended, thus reaching areas of the level that are difficult to reach. But when we are not using the Electrosphere, we can rely on the Prevasion, a passive ability that will automatically cancel the attacks suffered by enemies while consuming a part of the energy bar.
Ultimately we also find a series of skills that can be selected and that take advantage of the appropriate points which will recharge once consumed by eliminating enemies. These will be of two types: Offensive, real special moves capable of killing even the most ruthless boss in a few moments, and of Support, ability that can prolong the effect of the Electrosphere or restore our life energy. These skills will be unlocked as you progress through the story or level up with experience points earned on the field. Once used, we will have to wait for a cooldown period before we can use them again. On the other hand, linked to history, we will be offered the possibility of being resurrected in case of defeat. It will be the Muse, an adept that we will save in the first mission of the game and with whom we will have to talk before each battle, who freed his song will allow us to return to battle, strengthening us and making the use of the Electrosphere infinite.

Azure Striker Gunvolt also offers a crafting system closely linked to character customization. By completing the levels in the best possible way, perhaps by throwing an eye on the many challenges available, we will be rewarded with medals that at the end of the mission will allow us to unlock some materials in a completely random way that can be used by the Merchant (reachable from the main menu of the game) to create new equipment that will give Gunvolt new characteristics or powers, such as double (or triple) jump.
Everything we have described to you will be exploited to the maximum to get the better of Azure Striker Gunvolt. The game itself is never prohibitive, and although the biggest challenge is represented by the bosses at the end of the levelor, it will take about 6/7 hours (depending on your skills) to get to the credits. The beauty of the game lies in its versatility towards the player. We will be able to dedicate ourselves to speedrun challenges, trying to finish the level in the shortest possible time or decide instead to dedicate ourselves to maximizing the score, trying to keep the combo counter high and continuous that will increase our score. Here, compared to the classics such as Mega Man, a completely different approach to the game can be seen, especially in combat, pushing the player, once the enemy has a continuous dance to avoid the bullets and keep our score intact, especially against the bosses, who will need pinpoint precision and a spirit of observation to learn every attack pattern to perfection. And even after Azure Striker Gunvolt it will be possible to continue playing, perhaps collecting all seven gems hidden in the levels to access the real ending and face one last fight.

After several months of waiting Azure Striker Gunvolt arrives on the Nintendo eShop in its latest updated version containing some gameplay changes and a new Boss Rush mode at the price of 12,99 €. If you buy the game before July 3rd, you can get it for free Mighty Gunvolt, 8-bit demake of Azure Striker Gunvolt.

On a technical level we have a platform that is inspired by the aesthetics of the 90s genre, with a style that recalls the sacred monsters of the 16-bit era and in particular (once again) the Mega Man Zero series, both in terms of themes and settings. Valuable the particularly inspired and characterized character design, especially in the bosses at the end of the level, who once released their Septimal power show off an attractive and respectable design. The excellent work done by the graphic designers of Inti Creates is then found in the animations of Gunvolt (and in turn in the army of enemies), all always very accurate with particular attention to the smallest details, in the pixel art that gives life to the artworks. of the characters or in the realization of the levels themselves, which perhaps lack too much linearity, dampening the platform factor of the title.
To the music we find Ippo Yamada already author of many of the songs in the Mega Man Zero series (in addition to other Inti Creates productions) and who manages to pack a pack of tracks with a retro aftertaste with a strong rhythm. Even the song sung, Resurrection, which is activated when we fall into battle by waking up, gives the game that epic flavor it needs and it will especially make anime and J-pop lovers happy.
Azure Striker Gunvolt is fully translated into Spanish, though the adaptation is not so precise, with frequent translation errors or typos scattered here and there.

Verdict 8.5 / 10 Couldn't you stay home watching kitten movies? Comment Azure Striker Gunvolt is a bolt from the blue. The wait has certainly been rewarded with an action platform of the highest quality, which will surely make the lovers of the Mega Man Zero series happy, or in general the lovers of platform games of the 90s. Despite this attitude of paying homage to a genre that is no longer in vogue as it once was, it manages to bring a breath of fresh air to the 3DS eShop at an acceptable price for the offer. Although everything works perfectly, some shadows remain on the upgrading system and the Gunvolt equipment, which allows for great customization but which does not affect the game dynamics so much. The level design also suffers from little variety, but overall they are smudges that fail to undermine the Inti Create title. Pros and cons ✓ Style to sell
✓ Solid and well functional gameplay
✓ Intriguing and well characterized game universe ... x Italian adaptation not the best
x Crafting and equip relatively affect gameplay
x ... History to be explored
Do you want to be a video game expert and know all the tricks, guides and reviews for your video games ? Holygamerz.com is a group of video game fanatics who want to inform you about the best tricks, guides and tips. We offer you the best information to be a reference in gaming, so here you can find guides, tricks, secrets and tips so you can enjoy your games to the fullest. Are you ready to get all the achievements of that game that you resist so much? Enter now and enjoy your favorite video game to the fullest!
News Relegation - Bugs Bunny: Lost In Time ❯