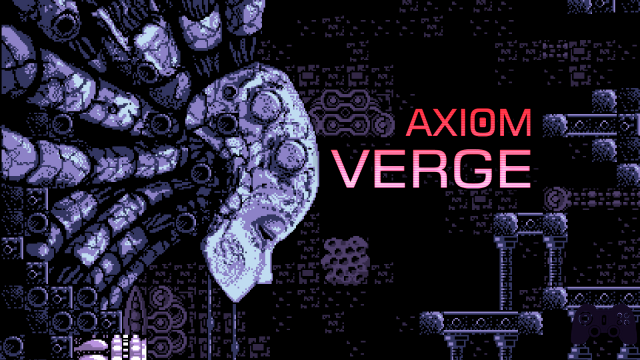 Back to zero. We could summarize in these simple words the tendency of some developers to rediscover the origins of the video game, paying homage to the great classics of the past, inspired by them. An increasing trend that has particularly affected the indie market (but not only), the limited budgets that have "forced" a retro refinement, which despite everything manages to break through in an incredible way on the general public. Economic but not idelogical constraints and it proves it Axiom Verge, at first glance a "simple" clone of Metroid but which contains within it one of the most inspired metroidvania of recent years.

Despite the strong with Metroid, once scratched the rind begins to mesh and flex its muscles

Using a term for those who love English, we could define Metroid as a trendsetter, one of those titles that has marked history by creating a new genre, that of metroidvania (together with the "vampire" counterpart from Konami) which generations of titles have been inspired by over the years.
Apparently Axiom Verge chooses the simplest path, that of shameless homage, as if to find oneself in front of one of those cheeky clones that often invade the market. Both the graphics and the music remind us of a Super Metroid and immediately the elements in common with the classic Nintendo are many. Despite the strong resemblance, once the rind is scratched, Axiom Verge begins to engage and flex its muscles. Its structure is that of raw metroidvania: non-linear progression, massive backtracking, hundreds of enemies to kill and pinpoint accuracy platforming. From this point of view, the game does not miss anything by respecting the plot of the genre to the letter.
Even the story perfectly follows certain forgotten canons, and without unbuttoning too much, it pushes us to dissect the game in search of an answer. We will check Trace, a young scientist who, following a laboratory accident, wakes up in a place unknown to him, a mysterious planet populated by biomechanical creatures ready to kill him if he doesn't pay attention. A few steps inside the planet of Sudra that the situation will begin to take shape once you get in touch with Elsenova, a powerful AI that will explain to us roughly what has happened to the planet and will offer us its help to get back home, as long as we lend ourselves to eliminate the threat that looms over Sudra. An apparently sterile story, which knows it has already seen and from this point of view we can only give up in the face of reality, but also in this case Axiom Verge manages to amaze us by being deeper and not so trivial than expected. The story will also develop thanks to the numerous files scattered in the meanders of Sudra, a well-present lore that will provide us with interesting details about the Axiom Verge universe and will help us better understand some events of the storyline.

One weapon, a thousand uses

Axiom verge is all about massive exploration and backtracking

Where the game is greedy for information is in the progression of our adventure. Focused on massive exploration, we will never be guided to a precise destination but it will be up to us to find the right way through the meanders of corridors that we will find ourselves visiting and that will become available as we get new improvements to our equipment and that they will allow us to access previously inaccessible areas. To support our mission we will find the Axiom Destroyer, a powerful multipurpose weapon capable of exterminating the hordes of enemies or opening new gaps in the level. After some enhancements obtainable in the early stages of the game we will be able to take advantage of the Laser drill, able to shatter the rock and allow us to continue our journey or reveal secret portions otherwise unreachable. In addition to providing us with the necessary fire support (which can be upgraded and customized based on the numerous upgrades that will change the type of shot), the Destroyer can be used to modify some anomalies present within the game, gliths that affect certain areas and which can be rewritten. This will also affect enemies, not always with the same results: some can be defeated more effectively, others will become more aggressive, or they can be used as gameplay elements and used as platforms to our advantage. This system pushes the player to experiment by offering him an excellent tool to use as he sees fit.


Axiom Verge arrives exclusively on PlayStation 4 at a cost of € 17,99. By purchasing the game on the Sony store we will get, once the PS Vita version is also released. Cross-buy therefore for the title of Tom Happ, although it remains to be seen if the game will also take advantage of the cloud and the cross-save features that allow you to continue the game on multiple platforms.
The PC version, on the other hand, lacks a release date, which is still set for 2015.

Trace can also rely on other gadgets it will find in its path such as the Remote Drone, which similarly to the morphosphere of Samus, will allow the young scientist to venture into tunnels and narrow spaces closed to him. Moving instead to a territory more akin to titles such as Turrican o Bionic Commando, we also find in Axiom Verge a very useful grappling hook, which like the other enhancements will allow us to expand our exploration capabilities and reach forbidden areas. Similarly to the titles mentioned, we will be able to use the grappling hook to hang and swing, obtaining the necessary momentum to jump. Of all aspects of Axion Verge this is perhaps the only one that needs a major overhaul in the controls. Although the use of the Grapple is relegated to the final stages, St.offers some problems in its management and consequently in the precision of the controls, which oblige us to attempt the maneuver several times.

Axiom Verge gives its best in clashes with the huge Bosses

Axiom Verge gives its best in clashes with the huge Bosses that we will find ourselves fighting in order to continue the adventure. Each of them is a challenge to be faced with a clear mind, studying every single movement, learning the attack patterns and a few too many distractions will be enough to find yourself at the last save point visited. Here our manual skills will be put to the test, as well as our nerves, also thanks to the substantial increase in difficulty during these sections compared to the rest of the game.
Unable to quantify the duration of Axiom Verge.
Given the nature of the game and the different approaches it can offer, completing the game can take from 8 to 15 hours depending on how we decide to tackle the title and how much time we will spend exploring the levels, while the addicts of compulsive completion ne it will surely take much longer to get to the coveted 100%. The game also offers an additional difficulty level, if the already high level of challenge were not enough, as well as a mode Speedrun aimed at sprinters, enriched by a dedicated online ranking where you can compare your results with those of other players.

Axiom Verge is a "one man show" written, developed and set to music by Tom Happ

As Dust: To Elysian Tail o Thomas was Alone, Axiom Verge is a “one man show” written, developed and music by Tom Happ (aided by Dan Adelman, former Nintendo indie man who took care of marketing) American developer who spent 5 years of his life behind this monumental project, demonstrating his skills as a handyman programmer. A solo journey that took time and energy but that produced great results. Not only on the gameplay side, which as we have seen is solid and well designed, but also on the audiovisual level.
The use of retro two-dimensional graphics is almost a must and even here the visual references to the greats of the 16-bit era are always around the corner. Tom Happ proves to be at ease in telling us about Sundra and its inhabitants cwith an ever-changing realization that spans the themes of the different levels, just as the bestiary that inhabits the planet will change according to the area in which we will find ourselves. We are faced with a great example of pixlel art that will make especially long-time gamers happy.
Even the level design, the core of every self-respecting metroidvania, shows a great job at the base. The focus is aimed at platforming, almost without burrs (with the exception of the grappling hook) and the expanded structure of the levels will push the player to explore them several times in search of secrets and new roads.
The audio sector is also excellent, whose sounds, in particular the main theme will closely resemble those of Metroid. Similarities aside, even on this front we are faced with a work of quality, so much so that we wonder how he managed to perfectly cure this aspect, which in many other productions is often anonymous and neglected. Some songs that make up the sumptuous soundtrack are small pearls of chiptunes capable of working perfectly even unrelated to the title they belong to.
The Spanish translation can be revised, which suffers from some lexical inaccuracy and some unfortunate adaptation such as that of Elsanova which, using a typical Eastern accent, produces unpleasant results in reading.

Verdict 8.5 / 10 Samus approves Comment Axiom Verge is a love letter to Metroid and metroidvania in general. Despite the model to which it refers, and the decidedly retro approach, both in dynamics and in mere appearance, it is a title that has captured us and from which you will hardly want to part. Axiom Verge to date, in 2015, is an adventure that has its own well-defined identity and solid gameplay that many other titles dream of, and if we put the 90 load that it is an indie developed by a single person, it is impossible not to be amazed and fascinated at the same time. Lovers of metroidvania are obliged to buy with their eyes closed, while newbies or those who do not chew certain titles could approach this world, discovering a genre that knows how to give the player numerous satisfactions. Pros and cons ✓ Great tribute to Metroid and metroidvania
✓ Show character in gameplay and style
✓ Music of great importance x Grapple controls to be reviewed
x Translation into other languages ​​imperfect
Do you want to be a video game expert and know all the tricks, guides and reviews for your video games ? Holygamerz.com is a group of video game fanatics who want to inform you about the best tricks, guides and tips. We offer you the best information to be a reference in gaming, so here you can find guides, tricks, secrets and tips so you can enjoy your games to the fullest. Are you ready to get all the achievements of that game that you resist so much? Enter now and enjoy your favorite video game to the fullest!
News Marvel's Avengers: Infinity War will arrive on home video in August ❯