Attack of the Friday Monsters! Review In Tokyo Tale 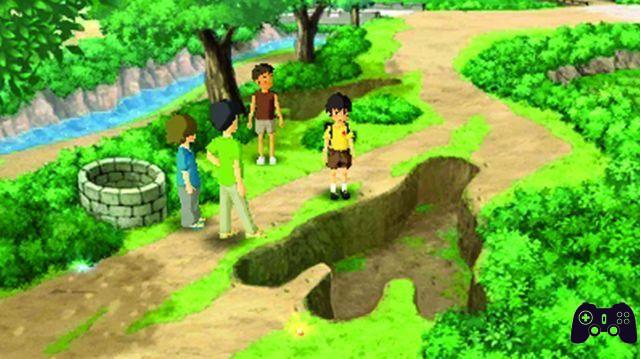 When you are talking about Level 5, very often the software house is approached to the titles of the Layton series, Inazuma Eleven or to the role-playing game recently arrived by us Ni no Kuni. However, these are none other than the best known games of the renowned Japanese house: in the last two years Level 5 has released two collections of games, collaborations with some of the biggest names in the Japanese industry, including Suda 51 (Liberation Maiden) and Yasumi Matsuno (Crimson Shroud).
In the West, the games that are part of Guild 01, in addition to having lost some titles along the way, were released in single digital only on the 3DS eShop, the same fate befell the second series named Guild 02 and the title that we will analyze today: Attack of the Friday Monsters! In Tokyo Tale.

It's time for the monsters

Written and directed by Kaz Ayabe, who owns the My Summer Holiday series - Sony exclusive never arrived in the West - Attack of the Friday Monsters! A Tokyo Tale is set in 1971, in a small town near Tokyo. Sohta, the young protagonist of this adventure, has just moved and will soon discover that Fuji no Hana is not a normal country: it seems that every Friday evening gigantic monsters or kaiju appear and equally huge Heroes appear to save the city from complete destruction. Together with his new friends, Sohta will have to uncover the mystery behind these monsters: are they real or is it all a hoax? Meanwhile, the boy will strengthen his relationship with parents and friends, in a journey that will mark the beginning of the transition to adulthood.
Speaking with the characters scattered around the country, the chapters of the story will begin, while on the map on the touch screen will appear the focal points where to go to continue in the plot: everything is rigid and confined but gives the game a fast pace without dead spots. The plot is the strong point of Attack of the Friday Monsters !, although it can be completed in a maximum of four hours, which manages to glue the graphic adventure enthusiast to the 3DS screen, as if watching an animated short film; moreover, after concluding the main plot, there will remain three missions to complete, all without help, which will guarantee a slightly higher level of playful challenge than the main plot.

Attack of the Friday Monsters! is a simple and very linear graphic adventure, does not offer puzzles (except one easily solved by anyone and the three available after the completion of the game), and accompanies the player in the continuation of the story of Sohta thanks to the aforementioned indicators scattered on the touch screen.
By guiding Sotha through the different environments, we will be able to talk to other citizens and discover more and more about the mysteries of the country, helping the child to understand what is behind the appearance of the kaiju. While we explore Fuji no Hana, we will also be able to collect monster gems (Monster's Glim), useful for the second part of the gameplay: the card game.
In fact, among children a game with monsters that have appeared in the city as protagonists, to participate, Sohta will have to collect seven identical gems and unlock the respective card (for a total of 15 different monsters); the card game is completely based on the Chinese morra, each card is given a symbol, a bonus, and an attack value, and in each battle it will be possible to use up to five rounds. All of this will obviously be useful for the unfolding of the plot of Attack of the Friday Monsters !, and the various clashes will break without disturbing the rhythm of the story.

Attack of the Friday Monsters! is very similar to the Studio Ghibli films, or precisely to classic Japanese animation, both for the themes dealt with and for the character design of the characters, curated by Shunsuke Honma. The backgrounds of Fuji no Hana are completely hand-drawn while the characters come to life with a pleasant if backward cel-shading effect, all contributing perfectly to the identification in the era in which the story is set.
The audio sector is enlivened by a female narrator in Japanese, which will tell us the whole story, including some thoughts of Sohta, just as if we were seeing an anime of the last generation, accompanied by orchestral music that will surely cheer up the few hours of play. Final note for the only two languages ​​present for subtitles, namely English and French, for yet another game that arrives in our country but is not localized in the language that was so dear to Dante.

Through the adventures of Sohta, Ayabe manages to convey several key messages, such as the beauty of looking at the world through the eyes of a fourth grade child, or not giving up in the face of the failures and disappointments that life gives us, because sooner or later. then the time will come for our revenge.
The issue of pollution is obviously also addressed, which is at the basis of the appearance of the Kaiju in the films of the 70s (who does not remember the radioactive liquid that led to the birth of Godzilla?), But everything is always seen through the eyes of Sohta and his friends, in a veiled but easily shared criticism.


Verdict 8/10 GOJIRA Comment With its simplicity, Attack of the Friday Monsters! In Tokyo Tale manages to capture the player for the five hours it takes to complete each game mission, immersing him in a retro and nostalgic fairy tale. Essential for those who love the genre and for the anime fans of the last generation, Ayabe conquers with this small exclusive in collaboration with Level 5. Now we just have to wait for a new story told by the Japanese screenwriter, and in the meantime mull over the many messages transmitted from Sohta and his friends. Pros and cons ✓ Interesting plot
✓ Captivating soundtrack x Reduced duration

Dead or Alive 5 Last Round review

Add a comment from Attack of the Friday Monsters! Review In Tokyo Tale