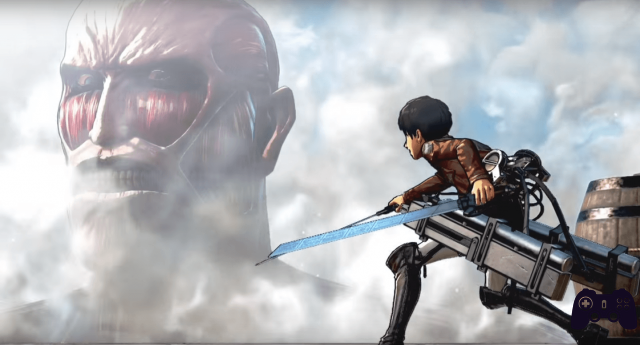 About a month ago in Treviso we had a hand on the Japanese version of the latest licensed title developed by Omega Force and dedicated to one of the successful manga of the last few years: Shingeki no Kyojin (Attack on Titan, The Attack of the Giants). Last August 26th AOT Wings of Freedom was made available in stores for PlayStation 4, Xbox One and digitally on PC, PlayStation 3 and PlayStation Vita, at a starting price of € 59,99. Will he have confirmed what he tried in preview?

Locked up in the walls

As already seen last year with Humanity in Chains (developed by Spike Chunsoft) also Wings of Freedom traces the events of the first season of the animated Attack on Titan. From the attack on Wall Maria to the clash with the Titan Donna, passing through the trainings and missions beyond the walls that made the fortune of the first half of the series of Hajime Isayama. Retracing the twenty-four episodes of the animated product, Wings of Freedom is certainly a game aimed at fans of the anime, but this does not spare a few winks to the readers of the manga: there is no shortage of cameos of characters that in the first season of the anime they haven't seen each other yet, or some clue as to who the true identities of some of the particular titans are, all relegated to the post-credits part, when we move on to the additional missions (which we will discuss in detail below).

The Story Mode consists of three chapters divided into several episodes and will put the player mainly in the shoes of Eren, Mikasa, Armin and Levi telling the stories from each of their points of view. Once you have completed the approximately ten hours of events and seen the credits, the epilogue will begin, which is nothing more than the hub of the exploratory legion, in which you can accept the expedition missions (also available in the multiplayer compartment), repeat events to get better ratings or find secret Titans, upgrade your equipment and accept requests from other characters in order to unlock new costumes or weapons for the 3D maneuvering system. In the Epilogue we will be able to use any of the nine characters at our disposal, aware of the fact that each of the cast members not only has a particular ability (we'll talk about it shortly) but will unlock different requests from the rest of the company. Unfortunately, reducing the choice to only nine protagonists when, throughout the game, we are also accompanied by other humans created by Isayama, is one of the weaknesses of the production of Omega Force, which, having to convince the fans of Attack on Titan, could dare much more on this point of view. Perhaps more choice would have helped mitigate the far too much similarity of exploration missions that in the long run could be repetitive given the constant aiming, killing and repeating that permeates the entire gaming experience. 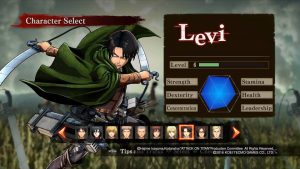 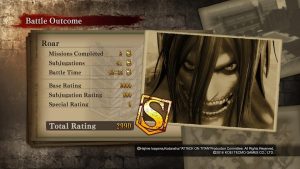 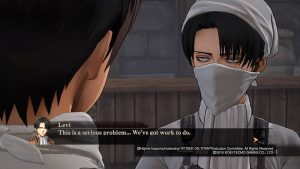 We had already seen firsthand, during the preview in Treviso, the frenetic gameplay and certainly in line with the series on which Wings of Freedom is based. Where initially one can remain displaced, once the rhythm has been taken, everything can be summarized with three simple moves: activate the 3D maneuver with square (then shooting the harpoons), aim with R1 the titan (by moving the right analogue the crosshair on the limb to hit or directly on the back of the neck) and once speed is gained (either normally or with X) press triangle to slice and inflict as much damage as possible to colossal enemies. The entire gameplay of Wings of Freedom is based on these three commands, with the addition of a series of actions that can make it even more satisfying and immersive, such as the use of sound or flammable grenades thanks to the directional button on the D -pad, or the consumption of gas and blades that will force the player to make constant supplies during the missions. Small parenthesis for the horses, necessary to move in the areas outside the walls where there are no buildings to whiz between, and which will follow the player everywhere in the immense game map, making them invincible against the titans (the horse unlike our companions does not is never dead) and thus breaking up some of the drama of the situations. 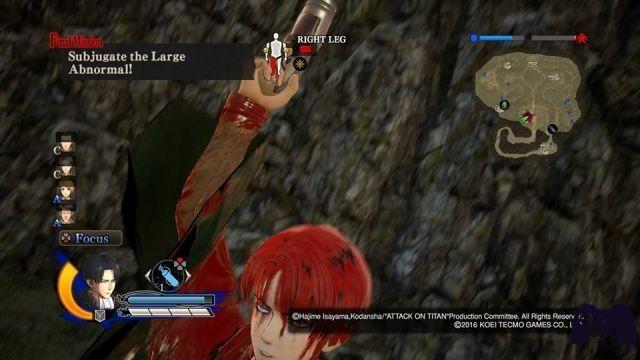 R2, on the other hand, is entrusted with the special attack bar similar to that seen in the Omega Force musou productions, once filled and used it will make the character faster and stronger, in addition to making the whole team attack the target of the turn instantly: in the case of Eren once the game is over you will have access to the transformation into a Titan, so as to subjugate the smaller opponents much more quickly. Each character also has a special ability that should set them apart from the other eight usable exploration legion members. Unfortunately on paper this is not the case, and some of them find themselves sharing this innate peculiarity: for example Hange and Armin will both be able to give orders to their team (with a circle) while Mikasa is able to chain more attacks with Triangle, while Levi is simply the strongest of the whole cast and will deal a lot more damage. Also in this case the few usable characters are a deficit, especially given the non-uniqueness of none of the protagonists (Eren excluded).

Five to one and it's not a hand job

Last year we complained about Humanity in Chains' AI being ill-suited to teamwork seen in the animated and paper counterparts of Attack on Titan, luckily Omega Force seems to have learned from Spike Chunsoft's mistakes by proposing some mates. team reactive and ready to attack when we find ourselves in difficulty. This teamwork is further strengthened during the multiplayer sessions, which allow you to play with other owners of the game and make a slaughter of titans with no limits whatsoever (by completing the numerous exploration missions that also unlock content in the Story Mode Epilogue). Unfortunately, although multiplayer is fun and almost always lag-free, it will further lower Wings of Freedom's already low level of challenge, making hunting giants a mere pastime. The difficulty will lie in not completing the mission before having carried out the secondary orders, in order to take advantage of team play to maximize the score. 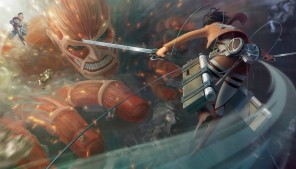 To learn more:
Shingeki no Kyojin: Humanity in Chains

a great job with polygonal models

Where Wings of Freedom gives its best is certainly the technical realization of the polygonal models: not only the characters (even those who unfortunately are not usable) but also the Titans are treated not only in appearance but also in movement, giving the right feeling of discomfort and fear when approaching him. To give even greater emphasis to everything certainly the original voices of the anime and the music of the soundtrack that surround every mission of the exploratory legion. Where the 3DS title used the images of the episodes of the TV series, Omega Force has completely reproduced in Cell Shading all the most important and dramatic events of the first season. Wings of Freedom shows the side with some slowdowns during the most agitated situations, perhaps also due to a camera that is not too fast and that must be dominated almost as much as the maneuvering system of the characters. On the other hand, there is no note for the environments, vast and not too varied, but which manage to make the right atmosphere and a tribute to those of the original product. 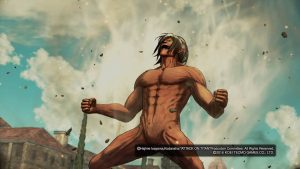 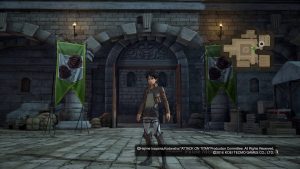 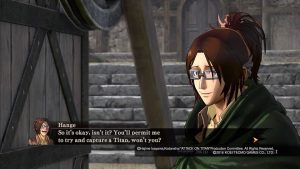 Verdict 8/10 But are there really any Connie fans? Comment AOT Wings of Freedom is a product designed purely for Shingeki no Kyojin fans and it is to them that it will give more satisfaction. The painstaking work in the animations of the characters, of the enemies and in the movements of the maneuvering system is overshadowed only by the small number of usable characters. In every other respect, Wings of Freedom is currently the best rendition of Isayama's work, and we are convinced that, with the second season of the anime coming, Omega Force will only be able to improve the product, perhaps adding more variety in the missions and especially usable cadets. Pros and cons ✓ Well made polygonal models
✓ Original soundtrack and dubbing
✓ Well thought out movement mechanics x Not very suitable for non-fans of the series
x Few characters
x Long-term repetitive missions
Do you want to be a video game expert and know all the tricks, guides and reviews for your video games ? Holygamerz.com is a group of video game fanatics who want to inform you about the best tricks, guides and tips. We offer you the best information to be a reference in gaming, so here you can find guides, tricks, secrets and tips so you can enjoy your games to the fullest. Are you ready to get all the achievements of that game that you resist so much? Enter now and enjoy your favorite video game to the fullest!
Bayonetta 1 + 2 review ❯

Add a comment from AOT Wings of Freedom review