Asking any manga enthusiast which are the most successful series of recent years, among the titles he will list there will be, without a doubt, Shingeki no Kyojin by Hajime Isayama (Attack on Titan, Attack of the Giants) strong of a successful animated series (with second season coming next year) and almost twenty volumes of the paper counterpart, the work has already been transposed into a video game by Atlus last year, with mixed results in Humanity in Chains for 3DS. They try again this year Omega Force e Koei Tecmo, with AOT Wings of Freedom, to be released on August 26th for PlayStation 4 e Xbox One. During the Nipponbashi 2016 held in Treviso last Week -End, in addition to admiring the original manga tables, we were able to try the Japanese version of the title for about thirty minutes, and we can give you some hot impressions. 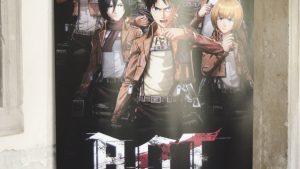 The game poster in all its glory

Beyond the skies of adventure

During our test we faced two missions of the Orders mode, and we could choose whether to impersonate Eren, Mikasa or Armin: our choice was the protagonist with whom we immediately threw ourselves into the fray to slaughter giants. In both missions we had to rescue some members of the recon team to be able to add them to the party, and defeat a certain number of titans to make the end-of-level boss appear. Wings of Freedom proposes the same feeling of freedom in the movements already seen in Humanity in Chains, but accompanied by larger environments, smoother animations and obviously a better technical sector. With R2 you aim at the target, while with square you take flight via Dimensional Maneuver, once you have selected with the right analog the limb of the titan to be killed (or directly the nape of the neck) just leave Square and press Triangle at the right time. Each killing is evaluated with a medal (Bronze, Silver and Gold) which at the end of the mission will guarantee us an evaluation in letters (from D to S): as often happens, the higher the evaluation, the greater the rewards.

Eren (and the other characters) will also be able to count on recharge or distraction tools, assigned to the UP key of the directional cross, while with the other directions we will be able to call the members of our team. One of the main flaws of Humanity in Chains was precisely the lack of intelligence of the companions who, very often, just watched us die. From our Wings of Freedom test, we encountered one particular reactivity of the party especially in dangerous situations: when a titan grabbed us ready to devour us, our companions gave their best to save us. This only increases the identification with the events of the protagonists, who often focus on team play.

Wings of Freedom uses a graphics engine in Cell-Shading and the models of the characters (and titans) seem convincing and catapult the player into the atmosphere of the series, thanks also to the original Japanese dub and the soundtrack. The only note is on the polygonal models of the NPCs that seemed like simple re-skins of the most famous characters in the series, giving a sense of dejavù every time we visit the base camp to accept new missions or buy tools.


Comment The road test of AOT Wings of Freedom convinced us, the feeling given by the controls of the dimensional maneuver could give more than a satisfaction in the full game. This is followed by an apparently solid technical department with a truly realistic cell-shading style. It remains to be seen the actual longevity, difficulty and variety of the side missions, and all the other possibilities introduced into the game by Omega Force. The appointment with the defense of humanity is for next August 26th. Pros and cons ✓ Visual style
✓ Original dubbing
✓ Feeling of the controls x Real longevity
x Real difficulty
x Effective variety of missions

Do you want to be a video game expert and know all the tricks, guides and reviews for your video games ? Holygamerz.com is a group of video game fanatics who want to inform you about the best tricks, guides and tips. We offer you the best information to be a reference in gaming, so here you can find guides, tricks, secrets and tips so you can enjoy your games to the fullest. Are you ready to get all the achievements of that game that you resist so much? Enter now and enjoy your favorite video game to the fullest!
News Claptrap's voice actor will not return to Borderlands 3 ❯

Preview Kirby and the Rainbow Brush

Add a comment from AOT Wings of Freedom preview