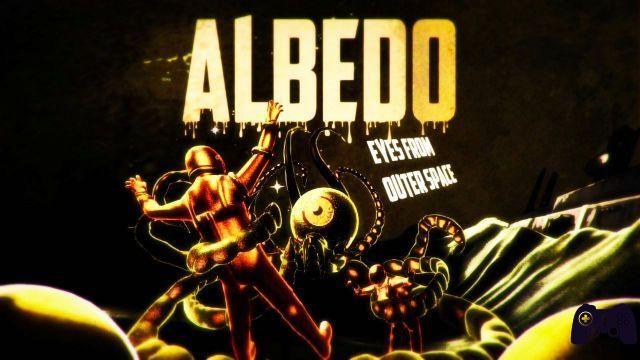 Is it possible for one person to make a respectable videogame? We realize this may seem like an inconsistent question with starting a review, but when it comes to Albedo Eyes from Outer Space it is inevitable to bring up certain topics. The title in question, in fact, is completely developed by a single man: Fabrizio Zagaglia. Obviously there is some collaboration related to the soundtrack, the dubbing and the creation of some graphic assets, but much of the writing and realization work was done by a single individual. Will this strange graphic adventure have succeeded in surprising us, or will the small size of the development team significantly affect the final result? Before we find out in the review below, we remind you that Albedo Eyes from Outer Space It is available for PC, PlayStation 4 e Xbox One at the price of approximately EUR 15.

Eyes that come out of the fucking walls!

the plot, in Albedo, turns out to be just an accessory to the gameplay, despite having some good ideas

La plot di Albedo Eyes from Outer Space (which from now on we will only call "Albedo”Ed) see John T. Longy, a laboratory guard working inside the Jupiter space base, find himself in the midst of an alien attack. After a turbulent start, Longy will have to cross the space base to be able to escape and / or stop the invasion before it's too late. The narrative sector of Albedo, however much it offers some valid ideas in the initial and final part, fails to strike and amaze the player who, inevitably, will find himself attracted to the valid game mechanics and in a short time will forget the reason for his actions. Even the protagonist proves to have potential, with a rude and decisive behavior like a certain Duke of our acquaintance, but throughout his path it is not drawn properly and fails to emerge to the point of becoming an unforgettable character. On the other hand, the game atmosphere is excellent that referring to science fiction film from the 50s and 60s is extremely fascinating and of sure impact for fans of the genre. Furthermore, for regular readers of science fiction novels, it is inevitable to think of the Urania series of books and those settings capable of surprising and disturbing at the same time.

Albedo's gameplay involves, amuses and amazes right away, without ever being easy

Il gameplay di Albedo, although it comes close to that of old-fashioned graphic adventures, it is strongly reminiscent of room escapes. The room escapes, which arrived not so long ago, are rooms in which you have to solve puzzles to unlock a door and then be able to access the next area. Also in this case, thanks to the use of the objects present in the various rooms, we will have to free the passage and continue with our exploration of the Jupiter base. This, however, is not the only "mode" of the game, as there are more action sections (not quite successful, to be honest) and moments, in the second part of the game, in which we will be forced to go back to the previous rooms to overcome the various schemes. Within the various areas, as in any self-respecting room escape, there will be puzzles to solve that we have always found amusing, valid and complex at the right point. It is therefore undeniable, Fabrizio Zagaglia's talent in creating engaging puzzles capable of making even the most experienced of players work their minds. Calculate longevity for such a product it is, of course, a lot complex, As the actual duration of the title is given by the skill of each player in overcoming the various areas and in solving the puzzles in the shortest possible time.

It gives a purely technical point of view, Albedo offers ups and downs. The atmosphere, as also mentioned in the paragraph on fiction, it has certainly succeeded and we really liked the use of some color palettes. However, it must be said that the polygonal modeling of the characters is not the best (in particular the alien eyes that give the title to the production) and that sometimes the areas proved too dark, forcing us to increase the brightness considerably. If these two details can be excused given the small size (to put it mildly) of the development team, it cannot be overlooked that, on more than one occasion we have found bugs that did not allow us to complete the room, forcing us to reload the previous save. Nothing to say about the sound compartment that, although it never manages to amaze, however he does his job in a more than satisfactory way.

Verdict 7.5 / 10 Eye for an eye ... Comment Albedo Eyes from Outer Space is, beyond being made by a single person, a valid, fun and complex title at the right point. Too bad that some elements, such as the underused plot and some technical problems too many, affect the final result, but we are sure that, on the next attempt, the very good Federico Zagaglia will be able to correct the shot. In any case, we can only recommend the purchase of this strange production not only to all lovers of science fiction and graphic adventures, but also to those looking for a title full of well-made puzzles and an unusual structure. Pros and cons ✓ Quality atmosphere
✓ Careful and addicting gameplay
✓ Never easy
✓ Complex and fun puzzles x Only accessory plot
x Careless "action" sections
x Some technical problems

Do you want to be a video game expert and know all the tricks, guides and reviews for your video games ? Holygamerz.com is a group of video game fanatics who want to inform you about the best tricks, guides and tips. We offer you the best information to be a reference in gaming, so here you can find guides, tricks, secrets and tips so you can enjoy your games to the fullest. Are you ready to get all the achievements of that game that you resist so much? Enter now and enjoy your favorite video game to the fullest!
Guides How to get experience points fast - Persona 5 Strikers ❯

Add a comment from Albedo Eyes from Outer Space Review