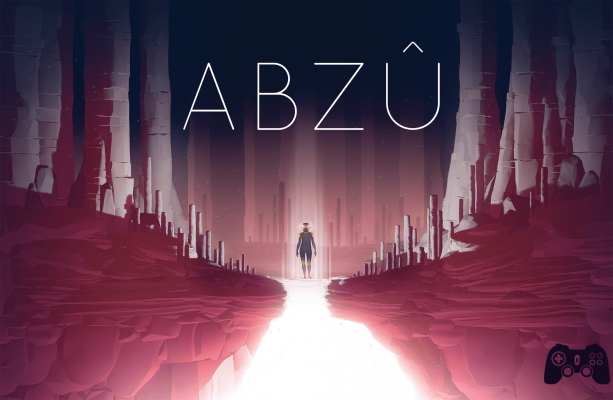 It was the now distant 2009 when Matt Nava he worked in the artistic direction of Flower (and later, in 2012, Journey), a title to say the least unique of its kind that tried to bring the videogame world as close as possible to the first concept of "Art". Not without a certain success: between the splendid colors of nature in Flower and the evocative oriental settings in the subsequent Journey, in fact, ThatGameCompany had effectively managed to turn one eye (and the other too) to the low incisiveness of the gameplay side, launching on the market two products with an already considerable artistic impact for the times. After having founded Giant Squid StudiosHowever, the good Nava must have thought that it was time to shift attention to the wonderful variety of the seabed: last August 2, the newborn development study published Abzu worldwide, making it available for download at Steam e PlayStation 4.

A world wrapped in an aura of mystery

As usual in works with the typical trademark of Matt Nava, the player will not receive any kind of premise to understand the story or the protagonist's relationship with it; immediately after selecting "New Game", whoever wields the controller / keyboard will be immersed (literally) in the amazing game world of Abzu, a world made of sea creatures and welcoming colors that pulsate life from every corner of the beautiful settings designed by the development team. Everything is wrapped in a strange aura of mystery: a non-place that seems at the limit between the physical and the metaphysical, between the real and the dreamlike, in which plays of light and wonders of nature play a continuous game for those who succeed to stand out more on the screen. It goes without saying that, on the whole, each element communicates perfectly with the others, inscribing itself in a context that works precisely in its grandiose and poetic complexity.

An aura of mystery that also surrounds the protagonist himself: is he a diver? Some anthropomorphic sea creature? Or maybe something totally different? We are not given to know; all we know is that we must move on, explore those beautiful sea beds and underwater rock constructions rich in natural elements, in what will prove to be a noble and cryptic crusade in honor of life itself. 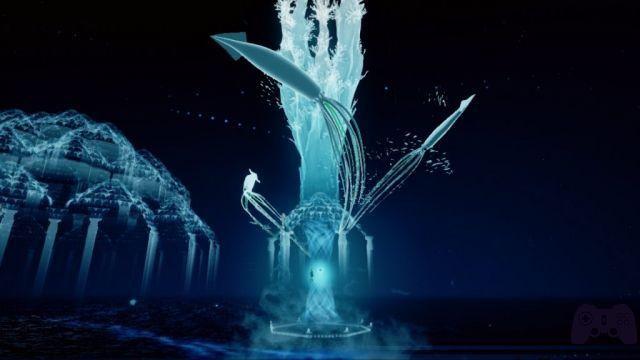 The mysterious amphibious creature will be able to rely on a pair of fins to move faster across the seabed, which will wear out whenever the player takes too long a sprint; however, they will automatically grow back in a few seconds, as if they were part of the creature's body. And it is directly in the swimming and underwater phases (substantially 99% of the game), in fact, that you can already notice the masterful care in the animations of the character: between twists, shots and incredibly graceful movements, the strange anthropomorphic creature moves with unspeakable elegance in any situation, swimming as if water were actually his natural element. Not infrequently you will find yourself simply having the character move from one area of ​​the game map to another, if only to admire his movements and to relax the eye with the splendid animations created by the developers. 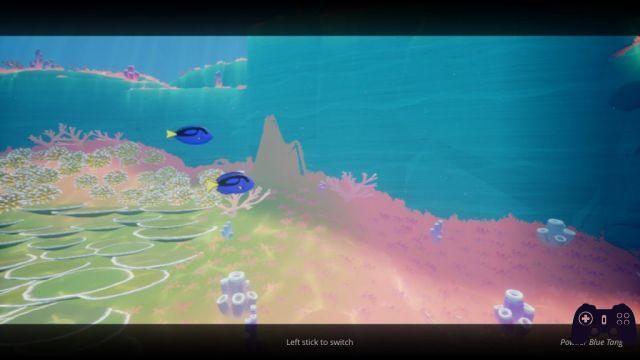 "I suffer from short-term memory loss!"


It follows that Abzu è, as recommended by the same development team, an experience that works much better with a controller in handrather than with a keyboard. The fluidity of the analog stick is unmatched, in a similar case, and there is no doubt that the title of Giant Squid Studio has a lot to gain even from the simple choice of the peripheral to be played with. In the last half hour or so of the game, moreover, things will take a slightly "unexpected" turn, and there will be a couple of cases in which the protagonist will be forced out of the water for a few moments, bringing a greater sense of variety to the game formula which, until then, could have proved slightly repetitive.

ABZÛ should not be locked up in "classical" canons of judgment

However, it is dangerous to try to lock up a title like Abzu within “classic” canons of judgment, as it would have been in the case of Flower and Journey. Here too, in fact, the small pearl of the Giant Squid Studio proves to be tremendously weak on the gameplay side, with a "sectional" structure (taken directly from Journey) to be overcome simply by solving a series of "riddles" and puzzles, so easy to overcome. how trivial and repetitive throughout the game experience. The same can be said of the completely non-existent challenge rate (which, albeit minimally, was still possible to find in Journey): there is no way to die, in Abzu, although there are several obstacles (such as water mines) that could seem tremendously deadly at first glance. Furthermore, contrary to what one might think by intuition, there will be no sea creature capable of causing us harm: the mysterious sub talks in extreme tranquility with all the fish, from the banal cod to the most fearsome sharks, without suffering any kind of reprisal. from them. 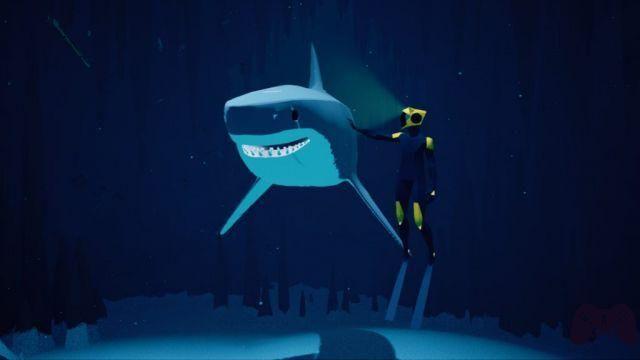 It follows that Abzu it is certainly far from being a simple "game" to "tackle" from start to finish, perhaps overcoming deadly challenges and testing one's survival skills; Abzu it is more a title that must be "lived" and "admired", a journey that must be enjoyed to the full with the mind and body. Not surprisingly, the soundtrack (also breathtaking, signed Austin Wintory) will never abandon the player throughout the game experience, accompanying the key moments of the plot and the sections of simple exploration in a masterly way; Abzu it is a melody, a crescendo of emotions and sensations that explodes at the end and leaves the player speechless, thanks to an incredible dialogue between sounds and visual art in an almost poetic harmony between the two elements.

There is no doubt that the videogame medium has changed a lot in recent years, perhaps thanks to the indirect contribution of titles like ABZÛ. It is not uncommon to see such games on the market now, and it is undeniable that the "palate" of a large slice of gamers is now starting to change more and more over time, also learning to appreciate titles such as Giant's latest effort. Squid Studio. Nonetheless, it is not possible to ignore the fact that ABZÛ is not a title for everyone: the absence of a real challenge rate and the gameplay sector reduced to the bone are just a couple of the many aspects that make ABZÛ a "non-game game", a visual and sensorial experience even before a playful one, and therefore a title that, on balance, could leave more than one buyer unhappy.

ABZÛ is not a conventional video game

And, however, it should be noted that Abzu it works precisely because it is far from being a simple conventional video game, although it is far from perfect even in that case. Turning a blind eye to the far too high price for the duration of the game (€ 19,99 on both platforms, for about 2-3 hours of play overall), however, the title of Giant Squid Studio is a real joy for the eyes and for your ears, an experience that you will hardly forget in the course of your gamer life and that anyone, casual or hardcore, deserves to experience at least once from start to finish. 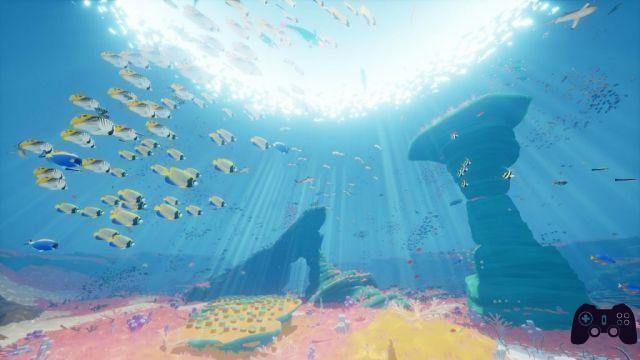 NB: The PC version of the game is only recommended if you have a rather powerful machine: during our test sessions, the Giant Squid Studio title proved extremely heavy for a mid-high-end machine, resulting in continuous crashes. of the graphics engine and an overall performance below mediocrity. Furthermore, there is the feeling that the porting was carried out without taking too much into consideration the reference platform: it will not be possible to change graphics options within the game without restarting the application, and the long initial loads mean that such a procedure is definitely tedious for the average PC user. Overall, therefore, where possible, it is definitely recommended to focus on the version PlayStation 4 of the game, in order to fully enjoy the experience offered by the developers.

Verdict 8.5 / 10 I got all wet! Comment The day before yesterday we accompanied a petal moved by the wind, in an attempt to bring colors back to a gray world dominated by concrete; yesterday we wore the shoes of a mysterious pilgrim traveling to a mountain, to discover a strange civilization lost in the desert dunes; today, in ABZÛ, we follow the adventure of a strange anthropomorphic marine creature, determined to bring life and its splendid colors back to an underwater seabed that is now dull and decadent. It is no secret, then, that former members of ThatGameCompany like the theme of travel, with all that such imagery and such an archetype brings with it over centuries and centuries of fiction. ABZÛ is this and much more: it is a journey, a sensorial adventure, a melody full of poetry that caresses the player from the very first moment and guides him to discover a whole new world. And, if it is true that a pilgrimage is also a continuous search for oneself, there is no doubt that ABZÛ is able to make the average player understand many things, both about himself and about the world around him. Unfortunately, the title of Giant Squid Studio suffers from a very low longevity and a decidedly weak and tasteless gameplay sector, although it is not certain there that the final product actually goes to aim; for this reason, ABZÛ is a game far from being suitable for everyone, even if it promises to leave many of those who decide to trust it with their mouths open. Pros and cons ✓ Phenomenal artistic sector
✓ Elegant and splendid animations to see
✓ Soundtrack in perfect harmony with the gameplay
✓ Amazing to see and play x Weak on the Gameplay side
x A little too short
x Heavy optimization issues (PC only)
Do you want to be a video game expert and know all the tricks, guides and reviews for your video games ? Holygamerz.com is a group of video game fanatics who want to inform you about the best tricks, guides and tips. We offer you the best information to be a reference in gaming, so here you can find guides, tricks, secrets and tips so you can enjoy your games to the fullest. Are you ready to get all the achievements of that game that you resist so much? Enter now and enjoy your favorite video game to the fullest!
Persona 4 Golden Guide - Complete Guide to Sayoko (Devil) Social Link ❯