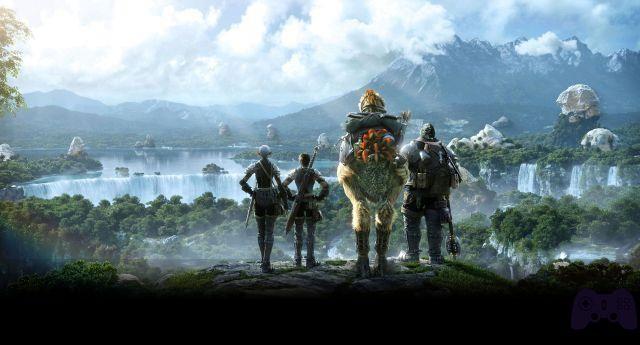 After the half miracle, to which A Realm Reborn: Final Fantasy XIV gave life, which took place on PC and Playstation 3 last year, here is also arriving on Playstation 4 the new MMORPG Square-Enix branded. Will this new incarnation be able to make a monthly expense valid and satisfy all the fans of the famous Japanese brand?

Despite the gender they belong to, the plot of A Realm Reborn manages to conquer right away thanks to a pressing narrative linked to the progress of one's character. To access all the features of the title, in fact, it is mandatory to continue with the main quest, making the story not only interesting from a purely narrative point of view, but a real fulcrum around which to evolve our hero. Furthermore, the excellent blend of pure fantasy and political intrigue makes the plot of A Realm Reborn something particularly complex and capable of far surpassing many other titles (even by the same brand) that try to make history one of the points. fundamentals of production. Beyond an exciting main quest, we can also find an infinite series of secondary missions (some related to their class, while others attributed to us by the numerous NPGs) capable of entertaining us for hours and hours with charismatic adventures and fascinating characters. The real flaw, if it can be considered as such, of the narrative component of the Square-Enix title is the lack of localization in our language which could make the title inaccessible to non-English speakers also due to a strong use of slang and variations on the English language (such as, for example, the fact that many of the inhabitants of the seaside city Limsa Lominsa speak in pirate "jargon").


BETWEEN FATE, DUTY, JOB AND QUESTS

The gameplay of A Realm Reborn: Final Fantasy XIV on PlayStation 4 manages to fully convince as its PC and PS3 version, thanks to a key mapping that, after a few hours of learning, is easy, fast and intuitive. Too bad that the features of the Dualshock 4 have not been exploited properly, limiting the audio from the controller to some sporadic sound in some missions and allowing us to use the front touchpad "only" to move around the screen as if we were on a laptop . This last function, unfortunately, is slow and quite uncomfortable, becoming immediately accessory and of little importance. On the other hand, the interaction with the SHARE key is excellent which, given the MMORPG nature of the title, can only make the joy of those who, once embarking on a mission with friends or not, will want to demonstrate to everyone the wonders of the world of Eorzea and thousands of events that occurred during the course of the game. As for the remote play on PsVita it must be said that a really good job has been done. The title, in fact, runs smoothly without any problem and / or slowdown, although it must be admitted that sometimes excessive use of the rear touchpad makes everything slightly uncomfortable. With the advent on Ps4, PVP has also been added which, despite being able to entertain and involve, still lacks some balancing errors, making it far perfectible in the future. For the rest A Realm Reborn: Final Fantasy XIV manages to satisfy all those looking for a solid and satisfying gameplay, full of events to follow and capable of creating addiction right away. Leveling up, in fact, will not only allow us to access new moves and skills, but will be able to magnetize us to the console thanks to continuous new elements that will greatly expand our approach to the game. In fact, new jobs, new classes, new cities, new types of missions, new abilities and much more will be introduced. Getting bored playing A Realm Reborn is virtually impossible.

Visually, A Realm Reborn: Final Fantasy XIV manages to leave you speechless thanks to 1080p which makes the screen a riot of colors which, mixed with the excellent design of places, monsters and characters, will not fail to amaze even those who have played the previous incarnations of the title. Now everything is more defined than in the past and you can see how the depth of field and detail of each individual character has definitely improved. Unfortunately, however, some elements, such as some environmental textures, fail to make us forget that it is a last generation title adapted to the next gen and not a real new product. The sound sector is, as for any Final Fantasy, sensational and manages to convey emotions to every note of every place we are going to explore. Too bad that the dubbing, present only during some sequences of the main quest, has not been extended to all the characters of the game, leaving much of the dialogue silent and devoid of any sound. In any case, the technical sector of the Square-Enix title manages to convince right away, imposing itself among the points of reference for any current and future MMORPG.

And we come to the real dilemma of this title. Is it really worth a monthly expense? Beyond the final choice which, rightly, is up to the player, there is no doubt that the amount of events to be carried out, the care placed in the product and the constant updating by Square (two new patches are already available that increase the longevity of the title of tens of hours) should be valued and positively influence the answer to this question. We also remind you that the monthly cost is 11 euros to have one character available per server (up to a total of 8), while with only two euros more you can have eight characters per server, up to a total of 64. .

Verdict 9/10 Forget Final Fantasy XIII Comment A Realm Reborn: Final Fantasy XIV on Playstation 4 turns out to be a pillar from which to take an example to make MMORPGs on consoles that work. The plot, the technical level, the gameplay, the design; everything within this title has been carried out with great care and with great respect towards the gamer who, once embarked on the journey through Eorzea, will hardly be able to get out of the addiction that this title causes. Too bad that the monthly expense and the lack of localization in Spanish can scare the most fearful who, partly for fear of the language and partly for lack of confidence in the monthly fee, risk losing one of the best titles of the genre and, certainly, one of the best Final Fantasy of recent years. Pros and cons ✓ Immense longevity
✓ Definitely inspired design
✓ Technically of a high standard
✓ Solid, well-mapped gameplay on Ps4 x The monthly fee might scare some players
x The lack of localization could scare non-English speakers

Do you want to be a video game expert and know all the tricks, guides and reviews for your video games ? Holygamerz.com is a group of video game fanatics who want to inform you about the best tricks, guides and tips. We offer you the best information to be a reference in gaming, so here you can find guides, tricks, secrets and tips so you can enjoy your games to the fullest. Are you ready to get all the achievements of that game that you resist so much? Enter now and enjoy your favorite video game to the fullest!
Floor Kids Review ❯

Doom Eternal review is adrenaline injected into the veins