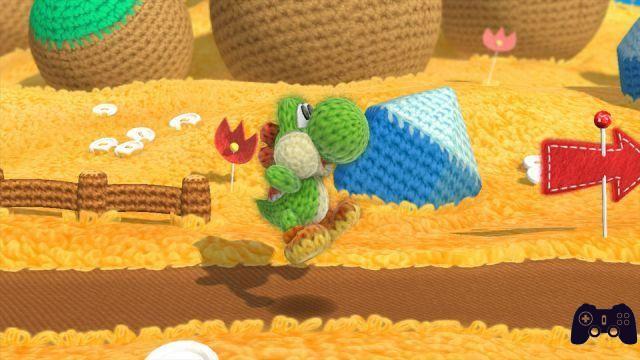 After the debut last March on 3DS with Yoshi's New Island, the green dinosaur friend of Mario is preparing for a title completely dedicated to him also for Wii U, entrusted to the hands of Good Feel (development team behind Kirby and the Hero's Cloth) and first appeared at E3 2013 under the name of Yoshi's Epic Yarn.
During E3 2014, the game changed its title and returned to show itself: scheduled for 2015, Yoshi's Woolly World will offer a two-player mode and a graphic style that winks at Kirby's woolly adventure, making the green disosaur a Amigurumi (a doll completely made of wool) and transporting him to a world that, even if we have not seen much, has nothing to envy to previous adventures.
While our editors were having fun with Splatoon, Super Smash Bros. and Mario maker in that of Milan guests of Nintendo, the undersigned participated in the Japan Expo 2015 in France, where Nintendo Europe occupied a large chunk of the event with all the titles shown at E3 2014, including Yoshi's Woolly World. 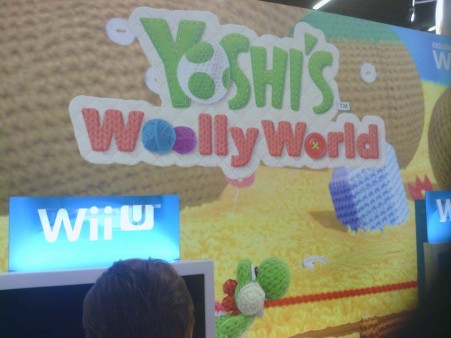 In the levels present at the Japan Expo, we were accompanied by a couple of Yoshi (we faced the entire demo in multiplayer) in three completely different areas, which tested both the two dinosaurs and the coordination between the players.
The gameplay philosophy is very close to that of Yoshi's Island: Yoshi will be able to swallow enemies, and turn them into balls of wool (instead of the classic eggs) to be thrown later to create platforms or defeat opponents.
The three levels tested develop horizontally and hide multiple collectibles even from the eye of the most attentive player, thanks to invisible passages disguised as walls, intertwined nylon threads that our hero will have to “untangle”, classic pipes from the mushroom kingdom that will take us to new areas, or simply the clouds with the question mark typical of the dinosaur series.
If the first level of the demo introduces us to this island made entirely of wool, with an inevitable tutorial for the basic commands of Yoshi, and the second takes the player underground, with destructible walls with balls of yarn and piranha plants to sew the mouth, the third and last one carries the green dinosaur into the sky, surrounded by some special chubby little birds that, once launched, will create cloud roads to go through quickly before they vanish.

The Red and the Green

Yoshi's Woolly World allows two players to collaborate in local multiplayer. One of the two will drive a Green Yoshi with the Gamepad, while the second, who can move with the Wiimote in "SNES mode" (ie orienting it horizontally), will take control of a Red Yoshi.
The real novelty is the ability to swallow the companion and throw it towards higher platforms in the form of a ball of yarn, or use it as a weapon against woolly enemies.
The two players will have to work together to get to the end of the level safe and sound, but they can also put a spoke in the wheel and prevent each other from collecting gems, which in the score screen will crown the winner the Yoshi who has collected the most.
From what transpires from the three levels tested, Good Feel has managed to improve one of the main flaws of Kirby and the Cloth of the Hero: Woolly World is not difficult, but it does not even border on the elementary simplicity of the chapter dedicated to the pink ball.

One of the positive aspects of La Stoffa dell'Eroe was certainly the visual aspect: the care with which Good Feel presented the 2D title full of details and animations left the general public satisfied.
Yoshi's Woolly World takes it one step further, making it a 2.5D platformer worthy of New Super Mario Bros and transforming all the protagonists of the island (including bosses) into Amigurumi.
Despite having tasted only three levels, the visual sector of Woolly World thrills and leaves entranced by the high number of details on the screen.
Unfortunately we were unable to listen to the audio tracks, due to the huge turnout of people present at the Parisian fair, so we hope for a soundtrack worthy of the visual aspect.

Comment Yoshi's Woolly World is definitely a title to keep an eye on and at the moment one of the ones I look forward to most next year. With a well-finished and detailed visual appearance, the green dinosaur is preparing for a debut with a bang on Wii U. Unfortunately, the actual longevity and the total difficulty of the title remain an unknown factor, two of the points against the previous work by Good Feel. Pros and cons ✓ The graphic style
✓ The level design x You have to hear the soundtrack
x The actual longevity and total difficulty of the title
Do you want to be a video game expert and know all the tricks, guides and reviews for your video games ? Holygamerz.com is a group of video game fanatics who want to inform you about the best tricks, guides and tips. We offer you the best information to be a reference in gaming, so here you can find guides, tricks, secrets and tips so you can enjoy your games to the fullest. Are you ready to get all the achievements of that game that you resist so much? Enter now and enjoy your favorite video game to the fullest!
Sonic Mania Plus Review - Enhancing Perfection ❯