What are Mesh Wi-Fi systems and how do they work? 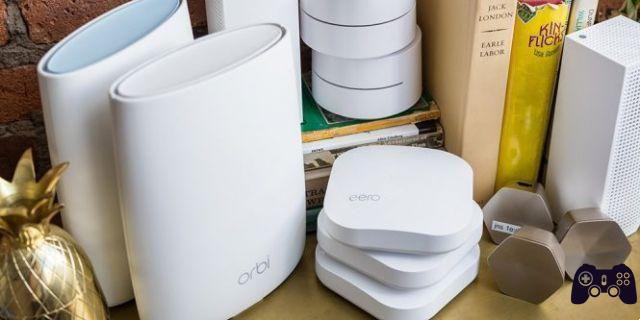 If your home's Wi-Fi network has dead spots, or the WiFi signal isn't reaching your entire home, you're probably thinking about getting a mesh Wi-Fi system. They have skyrocketed in popularity, but what exactly are Mesh networks and how are they different from a traditional Wi-Fi extender?


What is the Wi-Fi network?

Wi-Fi extenders have long been a popular option when it came to solving Wi-Fi dead spots in homes, but with the introduction of mesh Wi-Fi systems over the past couple of years, many users have started looking to these new systems, because they are very easy to set up and use.

Mesh Wi-Fi systems consist of two or more router-like devices that work together to cover the Wi-Fi signal throughout the home. Think of it as a system of multiple Wi-Fi extensions, but much simpler to set up, and it doesn't require more network names or other quirks that some extenders have. All you need is to connect the units and follow a few simple steps. Once configured, network management is also very simple, as many of the advanced and complicated features are out of the reach of the user, and the great features that people want are easily accessible and simple to use.

Networking has been around for some time, but Eero was the first company to introduce Mesh Wi-Fi into homes and become very popular today, and many companies have joined the technology since then, including giants like Netgear and Linksys.


Read also: How to change your WiFi channel to gain power and coverage

How is the Wi-Fi network different from using an extension device?


Also, if you need to manage your mesh Wi-Fi network, you can do it through a simple smartphone app, rather than through your router's complicated administration page. It makes it much easier to change settings and see a general overview of the network.


For example, if you set up the first and second mesh units in your home, you don't have to worry about placing the third unit close to the first unit, as it can just get the signal from the second unit you set up above, allowing you to create a very wide range. wider than you could with Wi-Fi extenders. Think of a relay race where runners hand over the baton to the next runner to advance the track network's Wi-Fi systems the same way.

Also, if you were to use a Wi-Fi analyzer app, you will notice that the Wi-Fi mesh network is actually broadcasting a separate Wi-Fi signal, one for each unit that has been configured. This is how traditional Wi-Fi extenders work too, but with those you would often have to switch between networks manually (between Network and Network_EXT, for example). However, a mesh Wi-Fi network still functions as a single network, so devices will automatically switch between mesh networks.

That said, there are some Wi-Fi extenders that can do this, but they still have a downside: since they use Wi-Fi to communicate with the router and devices, they add more stress to the Wi-Fi extender, resulting in slower speeds. speed.


However, mesh networking devices like Eero have multiple radios within each unit, so one radio can handle conversation with other mesh units and the other can be used to talk to devices, effectively distributing responsibilities to avoid a bottleneck. So not only can you get a better Wi-Fi signal, but you also get faster speeds around the house without degrading the signal.

Read also: How to improve your home's WiFi signal with your Android smartphone

There are definitely a couple of downsides that users should be aware of.

First of all, mesh Wi-Fi systems can be much more expensive than it would cost to use traditional Wi-Fi extenders. A set of three Eero units typically costs € 400.

You can certainly spend that much on a traditional router and some Wi-Fi extenders, but for the most part, if you're able to dive deep into your router settings to set up Wi-Fi extenders around the house, you can easily do it for less than € 300 with decent networking equipment. If you're not that savvy with networking products, the extra cost of a Wi-Fi system is definitely the best option, saving you quite a bit of a headache.


Second, most mesh systems don't have all of the advanced features that most regular routers offer. Sure, some mesh systems have their own set of cool features, like guest mode, limited access, and parental controls, though the content filter isn't all that great.

There is a workaround to this, though: you can keep your router and connect your mesh Wi-Fi system to an open Ethernet port on the router itself and put the mesh devices into bridge mode so that it simply acts as a light system. better than Wi-Fi extenders.

Ultimately, the mesh Wi-Fi system isn't for everyone. Experienced users who like to tinker with their network and have complete control probably won't want something like this, but your friends and family who aren't tech-savvy, and live in a home with a lot of dead spots, can easily benefit from the simple Wi-Fi mesh configuration and full-house coverage.

Also Read: Where to Place Your Router for Best Wi-Fi Speeds

What is Disney Plus and how to use it ❯

add a comment from What are Mesh Wi-Fi systems and how do they work?