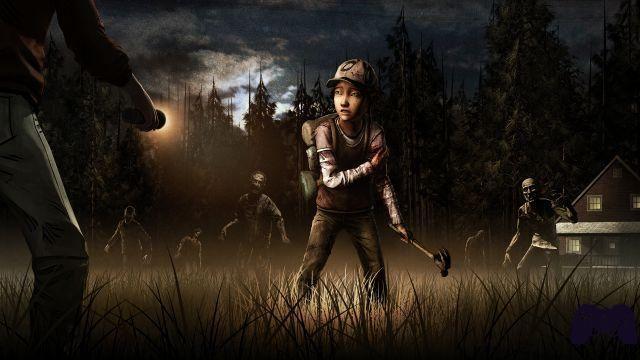 The Walking Dead, born as a comic series from the mind of Robert Kirkman and adapted (not always well) in the TV series, is certainly one of the most incisive brands of recent years.
It was no wonder when Telltale Games, famous for its graphic adventures, announced a collaboration with skybound (the production house of Kirkman himself) proposing to the general public The Walking Dead in a formula never seen before, and amazing everyone for the excellent quality of the five episodes and for the characterization of the unreleased protagonist.
The success was such that a second season was announced immediately, as if it were a telefilm, also consisting of five episodes.
Alternating from month to month with The Wolf Among Us, The Walking Dead Season 2 came to an end yesterday, August 27, will Telltale Games be able to replicate the success of the first season?

ATTENTION: The review contains spoilers on the first season of The Walking Dead, you have been warned.

Previously on The Walking Dead

The second season of The Walking Dead leaves a few days after Lee's poignant death C she joined Omid and Christa, reaching a gas station.

Wanderers can be handled easily, humans cannot, they are unpredictable.

Telltale Games reminds us right away that, as in the paper work, "Anyone can die”, And after the opening credits, the story takes a leap forward of sixteen months.
Due to an "eventful" night Clementine separates from Christa, starting all the events of this second series.
The little girl will be forced to grow up, like it or not, and to learn the most important lesson of Kirkman's apocalyptic world at her expense: the Wanderers are not the greatest threat, they can be easily managed, humans are not, they are unpredictable.

Between welcome and unexpected returns and new acquaintances, Clementine's journey and growth proceeds for all five episodes, however, truly finding space only in the last one (on which we will focus shortly without revealing anything of the plot) and leaving the girl a little victim of the events that will happen around her.
The characterization of the new cast is quite bland, and it seems that Telltale has focused mainly on three characters: Luke, a handsome, selfless young man and good with a rifle, a survivor Jane willing to do anything to save herself, and Sarah, the same age as Clementine but raised far from any danger from his father Carlos.
The other supporting actors (besides the old acquaintances from the first season and from 400 Days) are quite dull and fortunately you will not get attached enough before saying goodbye.
Like Lee, Clementine will also be able to move in the game areas, analyze the elements with the right stick, shoot or hit with sidearms during the now inevitable Quick Time Events and above all converse with the other survivors by changing the course of conversations and adventure graphics.
Although the plot changes slightly depending on our choices, as it did in the first series, if a character is destined to die, it will surely do so sooner or later.
This makes the first four episodes a mere introduction to the fifth, where you can truly shape Clementine's future as you please.

The last episode "No Going Back”In addition to being the high point of the season, it manages to improve one of the flaws of the previous graphic adventure set in the world of Robert Kirkman.
Unfortunately the final episode is the only one that can compete with the first season (we feel like including "In Harm's Way") although there are good moments in each chapter, the general climate is much less tense and the player fails. to identify completely with Clementine as it was for the late Lee.

as you continue through the episodes, the character grows and begins to impose himself

This is probably due to Clem getting carried away by discussions without being able to impose heavily on the decisions of the group: for most of the time he will have to choose which side to take, or whether to give wrong or right to certain characters leaving the survival choices to the NPCs.
Note however, as you continue through the episodes, the character grows and begins to impose himself, becoming an adult in all respects, until the final choice that will lead to one of the many conclusions.
In the finale of Lee's epic, the player was forced to let him die, and being able to choose whether to shoot him or go his own way, but all this did not affect the reunion, after the credits, with Omid and Christa.
In this second season, Telltale has retraced its steps by allowing the player to choose between several different endings (we have discovered five, but there may be others) and by launching a hashtag (found in the paragraph title) to share what the fate of your Clementine.
Each ending is profoundly different from the other, and will change the fate of the third season, already confirmed, as long as Clem is still the protagonist.
In that case it will be interesting to see how the different cliffhangers will be exploited, and if we can have more games that are really different from each other.

Loads as slow as wandering

The strong points on the technical side of the first season remain, including the Cel-shading, the character design that seems to bring the characters from the pages of the comic to life, and the anxious and melancholy music that pervades each episode.
Unfortunately as in The Wolf Among Us the uploads between one section and the other are exhausting, almost as slow as the Wanderers chasing the protagonists (at least in the PS3 version), we only have to hope that, with the transition to the new generation, these technical defects will be buried by Telltale Games once and for all.
The Walking Dead Season 2 it is completely in English (audio and text) and being a graphic adventure is recommended only for those who chew the Anglo-Saxon language well.

Verdict 8/10 Oh my darling, oh my darling, oh my darling Clementine Comment The Walking Dead Season 2 is mainly recommended for those who loved the first season, although they are not up to it. Even if Clementine manages to be loved and the numerous twists and turns will keep you glued to each episode until a multiple choice ending that we hope affects the future of the Telltale Games brand; everything is undermined by mostly silly side characters and relative choices to be made in the first four episodes, making everything inferior to the 2012 title. Pros and Cons ✓ Multiple endings completely different from each other
✓ Almost all the characters are well characterized
✓ Keeps the comic vibe x Clementine falls short of Lee
x Some characters are bland or clones of old acquaintances
x Too long uploads
Do you want to be a video game expert and know all the tricks, guides and reviews for your video games ? Holygamerz.com is a group of video game fanatics who want to inform you about the best tricks, guides and tips. We offer you the best information to be a reference in gaming, so here you can find guides, tricks, secrets and tips so you can enjoy your games to the fullest. Are you ready to get all the achievements of that game that you resist so much? Enter now and enjoy your favorite video game to the fullest!
Guides Where to find all the riches - Assassin's Creed: Valhalla [100%] ❯

Until Dawn: Rush of Blood review

Add a comment from The Walking Dead Season 2 review