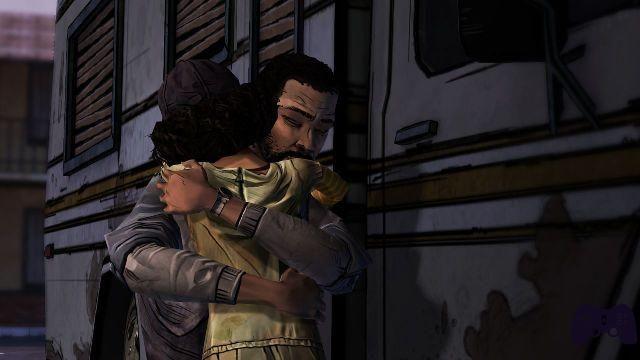 After the episodic graphic adventures based on Back To The Future and Jurassic Park, Telltale Games has decided to approach a much less known series but which in recent years has made a lot of talk, both in the United States and in Europe. We refer to The Walking Dead, initially born from the brilliant mind of Robert Kirkman and brought to life by the drawings of Tony Moore and Charlie Adlard, but which was brought to success by the eponymous show (which is inspired only by the comic book) broadcast by AMC (in USA) and from Fox (in our country).
With the five episodes of The Walking Dead, Telltale wants to give a prequel to the comic series by Robert Kirkman, thus separating from the show that has racked up awards and fans in the last three years, and giving explanations to some events not narrated on paper , such as what Glenn did before joining Rick's group or how Hershel lost her first child (Episode 1: A New Day) or that there are other utopian communities like Alexandria and Woodbury (we talk about Crowford in Episode 4: Around Every Corner).

A prequel full of zombies

We play as Lee Everett, a former university professor accused of murder who, while being transported to the prison, finds himself in the middle of the zombie epidemic that invades the world of Kirkman. Very soon we will meet the co-star of our adventure, little Clementine, left at home alone by her parents and taken into custody by Lee himself, who over the course of the five episodes will become a father figure for the little one.
During their journey, the two survivors will encounter dozens of different characters, good or bad, who will change their attitude depending on the answer given by the player.
The Walking Dead manages to convey the anxiety and gloomy atmosphere of Kirkman's comic, also thanks to the direct collaboration of the latter for the production of the game.

The evolution of choices

With The Walking Dead, Telltale Games wanted to depart from its previous works, where the adventure continued linear and smooth until the end; an almost normal graphic adventure, with interactive dialogues and quick time events to defeat zombies or some hostile humans, together with the classic exploration and collection of tools, which is the basis of every Telltale Games game. With the prerogative that every choice proposed to us will affect much of what the narration will propose to us.
In the five chapters of The Walking Dead, all the supporting actors will remember the decisions made in the previous episodes, holding a grudge or helping us without hesitation (Episode 4: Around Every Corner) in such a way as to sew the adventure on our choices; the plot will therefore undergo some changes depending on our taste and how we will behave: for example, if in episode 4 we manage to gain the trust of the group with a certain action, in episode 5 our companions will not think twice to get involved for our good.
Furthermore, given the presence of three save slots, no one forbids us to start the chapter again and change our choices, also to compare ourselves to other players through the world statistics present at the end of each chapter.

Readers of The Walking Dead know and fear these three words, spoken by Kirkman in the presentation of the series; no one is safe in the post-apocalyptic universe of the American writer, neither the protagonists nor the supporting actors.
With this dogma well printed in your mind, be prepared to see your decisions thwarted, because it is likely that even if you save a mate in one episode, he could die in the next. Maybe by your own hand ...
Telltale Games manages to make us become attached to almost all the supporting actors, causing emotional pain when at any moment we will no longer have them by our side; moreover, as happens in the comics to the detriment of the show, the politically correct is lost and even the children are in danger of life.
This is on the one hand the strong point of the game, which therefore manages to catch us off guard, but also represents the weak point, given that the ending of the series can be modified but remains the same in both cases.

The comic comes to life

With the cel-shading graphics, the guys at Telltale Games are able to give life to characters that we could have seen on the pages of The Walking Dead (even if we find them colored and not in black and white, ed), the dark colors and the anxious music they manage to kidnap and drag us during the hour of each episode, as if we were reading an interactive volume or as if we were risking our lives, given the short reaction time of quick time events.
The English dubbing is impeccable and each voice actor manages to give life to his own character, although the game is reserved only for connoisseurs of the Anglo-Saxon language, given the lack of Spanish subtitles (there are, in fact, only those in English).

At the end of the fifth episode, the player is left with many doubts but is also enriched by an interactive experience like few others; The Walking Dead will hardly appeal to the large audience of modern gamers, intent on shooting others more than talking to us or emotionally falling into videogame plots.
Telltale Games, armed only with a good plot and a great idea, finally manages to create a game that sticks to your seat, without resorting to multiplayer or mind-boggling graphics.


Verdict 8.5 / 10 Anyone Can Die Comment Telltale Games has hit the mark. Based on the Kirkman comic she succeeded where the show failed in my opinion, managing to attract fans of the comic in what is in effect the prequel to the universe of The Walking Dead. In these 8 months (this is the time that has elapsed from the release of the first episode on April 28, to the release of the last, on November 21) Telltale Games has managed to increase the anxiety and expectations for the release of each new chapter, in such a way that the player devours it immediately after the download, emotions that will hardly touch those who buy the now complete series. However, The Walking Dead remains one of the best graphic adventures of the generation and a new starting point for the guys at TTG, and we hope that, given the success of the title, they decide to translate at least the subtitles, guaranteeing access to an additional slice of the market. which would otherwise be excluded. Pros and cons ✓ Great prequel to Robert Kirkman's comic
✓ The story evolves thanks to our choices
✓ Great twists x Not suitable for all players
x Final little influenced by the choices

Do you want to be a video game expert and know all the tricks, guides and reviews for your video games ? Holygamerz.com is a group of video game fanatics who want to inform you about the best tricks, guides and tips. We offer you the best information to be a reference in gaming, so here you can find guides, tricks, secrets and tips so you can enjoy your games to the fullest. Are you ready to get all the achievements of that game that you resist so much? Enter now and enjoy your favorite video game to the fullest!
News Etrian Odyssey X will be the greatest of the whole series ❯