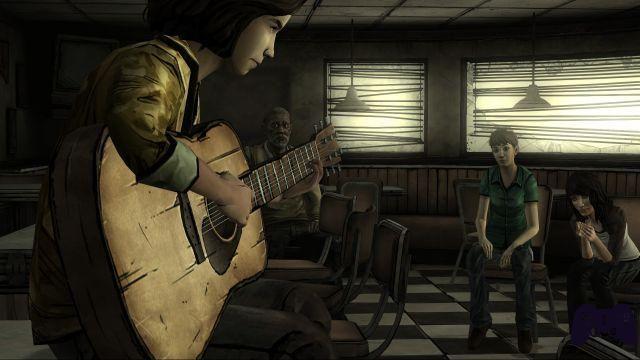 Last year, TellTale managed to captivate gamers around the world with one of the most beautiful and exciting graphic adventures ever.
TellTale's The Walking Dead, divided into five bimonthly episodes, swept up prizes (our review here), and when the whole adventure came out in physical packaging in the past few months, with finally an official Spanish translation (which is very rare, if not impossible, in a Telltale title until then), even more players succumbed to stepping into Lee's shoes.
After this success, TellTale has decided to fill the wait for the long-awaited second season with a DLC set in the first 400 days of the epidemic. Here, therefore, arrive in all the online stores The Walking Dead 400 Days, at the same price as every single episode (or € 4,99).

Unlike the episodes of the first season, completely focused on Lee and his group, in 400 Days we will have five characters available.
Each of them has its own past, and each story is set in a different moment of the period indicated by the title.
Furthermore, some events will reconnect to the choices made in the first five episodes, showing the fate of some unfortunate characters already met in the main story.
The five stories are very different from each other, both for development and for the possibility of choice that is given to the player.
The five protagonists are well characterized, but they are unable to give that touch of identification provided by Lee during his adventures, much less will they be able to be loved like little Clementine.
Based on our choices, the supporting actors and possible dialogues will change, but the ending will be unique and unchanging (as in the first season) even if, depending on what we do, there will be a fundamental repercussion that will affect the second season.
Unfortunately 400 Days lasts less than a normal episode of the series, and can be completed in about an hour, a bad blow especially given the identical price to the episodes starring Lee.

Being a dlc, the gameplay of 400 Days obviously remains the same as The Walking Dead, so we will find ourselves facing interactive dialogues and small quick time events to overcome the situations in which our unfortunate protagonists will find themselves.
As in the first season, even in 400 Days each answer will be remembered by the supporting actors, modifying their behavior and future dialogues.
Unlike the original title, however, in this dlc we find far fewer puzzles, and indeed the latter are submerged by the absurd amount of dialogues and crossroads to choose from to change the story.
All this makes 400 Days more of an interactive film than a full-fledged graphic adventure, and greatly lowers the actual gaming experience compared to the identification of the five main episodes.

The comic comes to life… again

Even graphically 400 Days remains at the good levels of Cel-Shading of The Walking Dead Season One, although on the PS3 version we found some drops in frames and some slowdown between one choice and another.
The English dubbing remains sublime, adding the necessary characterization to the protagonists of the dlc, with all the various possibilities that the multiple dialogues allow.
TellTale has also finally come to meet non-English speaking players, adding subtitles in our language, and translating all menus.

Is 400 Days an appetizer of what we should expect from the second season? Yes and no, the hopes are in long-lived episodes like those of the first, but a wider range of choices like those shown in this short DLC.
A useful addition to the gameplay experience and central to the storyline of the second series coming next year.


Verdict 7/10 Born to suffer Comment 400 Days is only recommended for those who have loved the first season madly, while we suggest waiting for an offer on the related stores to all other players. Giving a dlc with a total duration of about an hour for the same price as an episode of the series seemed rather reckless, especially when comparing the two gaming experiences. Although 400 Days is enjoyable as far as the story and characters are concerned, once finished it will leave a bitter aftertaste compared to the chapters of the first season. Let's just hope that TellTale does not reduce the length of the episodes of the second series, and that it returns to make us excited with the world of Kirkman. Pros and cons ✓ Kirkman's world comes to life again!
✓ Well characterized characters ... x ... but not as much as Lee
x High cost for a negligible duration

Do you want to be a video game expert and know all the tricks, guides and reviews for your video games ? Holygamerz.com is a group of video game fanatics who want to inform you about the best tricks, guides and tips. We offer you the best information to be a reference in gaming, so here you can find guides, tricks, secrets and tips so you can enjoy your games to the fullest. Are you ready to get all the achievements of that game that you resist so much? Enter now and enjoy your favorite video game to the fullest!
News + Ubisoft: Assasin's Creed Valhalla accused of skill ❯

Add a comment from The Walking Dead: 400 Days review