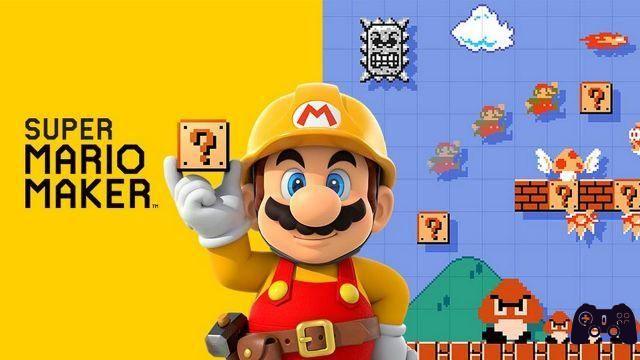 It was said a week ago, on the occasion of our preview, of how Super Mario Maker had grown from ad to ad almost to be a candidate for the "interactive encyclopedia" of the adventures on platforms of the most famous plumber in the world. Today, having arrived at the moment of the final verdict, let's try to understand how much the title has matured: Nintendo's latest effort will live up to the good impressions left us last time or we are faced with the proverbial project that despite the excellent premises has "burned ”On the finish line?

A Mario inside GamePad

Super Mario Maker visually retraces three of the most popular titles in the series, with the extra HD assets of New Super Mario Bros. U

Once the software has started Super Mario Maker immediately puts whoever is on the other side of the screen in front of a crossroads, while a randomly generated level appears in the background. By pressing the first of the two buttons, Play, you access what we can define the main mode of the title and the level editor, importing the level generated in the menu so that it acts as a starting point (which can easily be literally razed to the ground by holding pressed the Eraser Rocket icon at the bottom right). Choice of graphic design with which to package your creation (in addition to the original Super Mario Bros. you can choose from the styles of Super Mario Bros. 3, Super Mario World e New Super Mario Bros U, which acts in practice as a sum of the assets of the other titles by proposing a version in HD) and the theme of the level between Open Air, Underground, Underwater, Haunted House, Flying Sailing Ship or Castle, you get to the heart of creation thanks to the Palettes , which act as a collector for the various elements (and enemies) that can be placed within the level. LHowever, the customization of the levels thus created is not limited to these aesthetic and content components, but it also allows (by touching the classic timer with the stylus of GamePad) to set the time limit of the level and the speed of scrolling of the frame, which can be "non-automatic" (and therefore depend on Mario's position and movements) or continue alone to the right at three different speeds. You can also play in a certain way with the sound effects through the appropriate sub-menu, which allows access to a special palette dedicated to the sound elements that can be inserted, although the definition "sound element" is quite narrow to these elements. which also have "visual implications" on the level, such as fireworks, disco balls or cat paws that will try to hit Mario.

Having said about the tools that relate more closely to the content of the levels, it is impossible not to spend a few words on those that support the player during the creation process: in addition to the aforementioned Eraser Rocket able to instantly raze all the elements inserted to the ground. the screen could not miss a demo mode (to try in real time what has been achieved up to that moment), a button for the eraser (can also be activated, in a more immediate way, by holding down the two backbones to the right or left) and, above all , the multiple selection (L key or R key) which allows you to delete (or copy, if after the selection you press ZL or ZR) all the contents in a certain area. Also very appreciable is the Scia function, which leaves some “residual images” of Mario as he passes (visible only during the creation mode) after starting the demo mode of the level, in order to allow a more precise positioning of platforms and obstacles. If it is true that with the exception of the rubber these are unnecessary functions, it is also true that their impact on the user experience is definitely not negligible, since they allow you to speed up this phase of creation which of the Super Mario Maker experience represents the focus. In short, if on the level editor Nintendo was already well accustomed to the series Mario vs Donkey Kong (and in particular with the last chapter of this one, Tipping Stars), the Kyoto house on the occasion of the thirtieth anniversary of its most famous series has packaged a product that is truly at the limit of perfection: you can in fact create levels using all the features seen in the past years playing the various adventures of Mario and, as we will see in more detail shortly, from various points of view go even further by exploring new boundaries for this series of two-dimensional platformers.

Only limit: Sky Land (or almost)

As mentioned, the key word is freedom, and the stakes are very few

Already on the occasion of the preview we had touched the creative possibilities granted by the title, which had managed to convince us despite having only had the palettes of elements related to Super Mario Bros. (and related New Super Mario Bros U versions) available. Seven days later, having also been able to touch the elements taken from the other two titles included, we can only confirm the good impressions we had: between Lakitu able to launch Koopa (perhaps made giants by the classic Mushroom), winged fireballs that change trajectory when they hit some surface and other unprecedented combinations the stakes set by the developers are very few, and are summarized in practice in not being able to place more than three Bowser (or Bowser Jr.) for each level and in limiting the use of "Mushrooms?" (which allow Mario to change costumes, for example using those unlockable through Amiibo) to Super Mario Bros only. For the rest, once spent a few days to send the editor "at full content", one can practically only complain about the absence of the possibility to face the levels created in more players, which probably would have added an additional arrow to a quiver of possibilities however damn rich.

The only half misstep is the content release system

It is no coincidence that we talked about a few days necessarily to be spent before you can get a precise idea of ​​the potential of the editor: this is because at the first start of Super Mario Maker most of the Palettes and functions of the editor are disabled and will be given. every 24 hours, as you practice within the Create mode. This approach was chosen to avoid (we might rightly add) that the amount of elements and possibilities offered by the game "crushes" the player: if the problem actually arises and the intent is more than justified, it must be said that we would have preferred that in parallel with this choice, the possibility of accelerating this unlocking process had been present in-game, for example taking into account the total time spent in the editor and unlocking the contents based on the hours spent (and / or the elements used) or organizing ad-hoc tutorials on these functions and then unlocking them once these are completed (to understand, on the along the lines of the licenses of some driving games).

Things to do when not creating

On the occasion of the previous preview we have already had the opportunity to practically dissect in its entirety the sharing component behind the title. Here, therefore, we limit ourselves to repeating the considerations made and to say that this it does not look bad when compared with the very successful editor made available by the developers and, with the only exception of the search by level still anchored to an identification code rather than keywords, there is really everything you need in these cases, including the ability to follow your favorite authors or receive status notifications of appreciation of their own levels. We had not yet talked about the “pre-installed” levels present in the game, which can be added to the Memobot (a sort of binder that will then allow you to replay these demo levels or modify them with the editor) essentially in two ways. In fact, some of these will be offered to the user every time the title adds new Palettes or functions to the editor, and generally they will focus on these, while to access all the others it will be necessary to face the 10 Mario Challenge, a series of 8 levels to complete (each added to the Memobot when completed) with only 10 lives available in total. The Memobot also collects the levels created by the player, to allow in addition to the publication of the same also any changes at a later time, as well as the possibility of saving the levels created by other users (also allowing in this case both to replay them and to use them as a starting point for your own creations). There is therefore a series of offline content for players who cannot access the levels created by the rest of the users, which justify the expenditure therefore even in these increasingly limited cases.

The plumber never gets into trouble

From a technical point of view there is very little to report: Super Mario Maker performs more than just fine even when you literally cram a level of enemies and items, never showing his side on this front. The same goes for the sound, given that each "graphic style" and each theme that can be used for the levels boasts the corresponding theme taken from the original game, thus guaranteeing an excellent quality standard and some blast from the past.

Verdict 9/10 Ok, but where is my Wario Maker now? Comment Super Mario Maker, having arrived at the final judgment, managed to become everything we had wanted that 10 June 2014 on the occasion of his first public release, and perhaps he also managed to go a little further thanks to his ability to allow us to do things (literally) never seen in any other chapter of the series. The only flaws are in practice the absence of multiplayer and a content release system perhaps a little too rigid, but otherwise we can only hope that this title will give the start to a series of other Nintendo Makers with the same quality level. In any case, Mario could not have blown out his 30 candles in a better way. Pros and cons ✓ The only limit: the imagination
✓ Very successful level editor
✓ (Almost) flawless sharing of levels x The multiplayer is missing
x Unblocking content a bit slow
Do you want to be a video game expert and know all the tricks, guides and reviews for your video games ? Holygamerz.com is a group of video game fanatics who want to inform you about the best tricks, guides and tips. We offer you the best information to be a reference in gaming, so here you can find guides, tricks, secrets and tips so you can enjoy your games to the fullest. Are you ready to get all the achievements of that game that you resist so much? Enter now and enjoy your favorite video game to the fullest!
Guides Guide to the New Year celebrations 2021 - Pokémon GO ❯