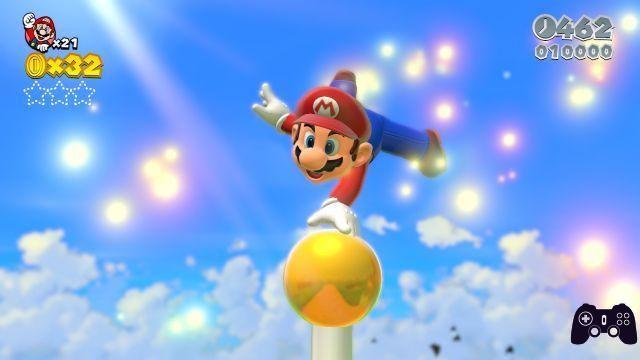 During the Direct broadcast during E3 2013, Nintendo was supposed to present the spiritual successor of Super Mario Galaxy but, as usual, it left everyone stunned by presenting Super Mario 3D World instead.
Instead of harking back to the mustachioed plumber's space title, 3D World, it follows in the footsteps of Super Mario 3D Land, released nearly two years ago on 3DS.
In Milan last July 5th We managed to get our hands on a demo version of the game, thanks to Nintendo, enjoying five preview levels, and some fundamental novelties in a 3D Mario, such as local multiplayer.

As already mentioned above, Super Mario 3D World (from now on only 3D World) will introduce for the first time in a 3D Mario the four-player multiplayer.
To join Mario and his brother Luigi, we will find an inevitable Toad, able to outrun the two plumbers, and, for the first time ever since Super Mario Bros. 2, we will have Princess Peach, who this once it seems she managed not to be kidnapped.
At the moment the cast of protagonists is the only known similarity with the 2D chapter for Nes, we do not know if there will be plot or enemy links (A return of King Wart maybe?).
To strengthen the powers of the group instead, we find the inevitable transformations, among which the Cat costume makes its debut, which allows the player to climb vertically on the walls, and make lethal turns on the enemies.
This enhancement seemed to us too exaggerated, greatly facilitating the levels faced in the demo, and we strongly hope that continuing in the title, there will be more difficult worlds where the costume will be put to the test.

All for Mario and Mario for all!

If 2D Mario multiplayer is always fun but also confusing and sometimes frustrating, the same cannot be said for what we have seen of 3D World.
Three players will use the Wii mote, or the combo nunchuck plus mote, the fourth will have everything on the Gamepad screen; the camera, instead of following the player later in the level, will focus on where there are more characters; even if it will also happen in 3D World to be excluded from the screen and end up floating helpless in the classic bubbles of the 2D series, we will be able to get out of it at any time by jumping into them, without waiting for a player to come and rescue us.
In the levels being tested in Milan, we were shown a new type of co-operative mechanic, which exploits the synchrony of the players, to guide a marine dinosaur to the finish: if the four friends will press the direction in unison, the unusual ferry will move faster, allowing you to pass through secret roads and collecting the inevitable collectibles.
In another level, there were special transparent tubes with multiple bifurcations, which transport our heroes along the game map, and scattered with enemies and traps, to be avoided or destroyed thanks to the flower of fire; in a bonus zone instead, the mustachioed plumber picks up a pot containing a piranha plant, and uses it to eat opponents in his path, piling up coins.
Finally we faced one of the bosses of the game, a huge snake circus director, surrounded by his balancing henchmen, on which, thanks to the cat costume, we climbed, in order to deliver the usual three classic hits of the series.
The multiplayer of 3D World enjoyed us and gave us good hopes for the title, which thanks also to the co-operative gameplay, will be able to ensure the replayability of the levels in the evenings at home with friends.

You don't live on red alone

From a graphic point of view, 3D World recalls all the brightness and lively color palette already present in 3D Land, cleaning it and increasing its definition, and it is a joy for the eyes of fans while not revolutionizing the way to present the 3D world. Mario as Super Mario Galaxy did in his day.
The levels are longer than 3D Land, and maniacally treated in every detail as solo Nintendo EAD can do. Finally, 3D World remains very fluid even when there are four players on the screen, without slowing down or ruining the large levels present.


Comment Super Mario 3D World confirmed that you didn't necessarily need a Galaxy to make immersive Mario 3D, and it seems to take all the good features of Super Mario 3D Land and improve them even further. We hope that until December, the month of the release of the title, Nintendo will continue to improve it, providing us with a Title to have at all costs for Wii U. Pros and Cons ✓ Fun multiplayer
✓ Colorful and lively x Graphically, more can be done
x The Cat costume looks too powerful

Do you want to be a video game expert and know all the tricks, guides and reviews for your video games ? Holygamerz.com is a group of video game fanatics who want to inform you about the best tricks, guides and tips. We offer you the best information to be a reference in gaming, so here you can find guides, tricks, secrets and tips so you can enjoy your games to the fullest. Are you ready to get all the achievements of that game that you resist so much? Enter now and enjoy your favorite video game to the fullest!
News Final Fantasy VII Remake: Official date revealed ❯