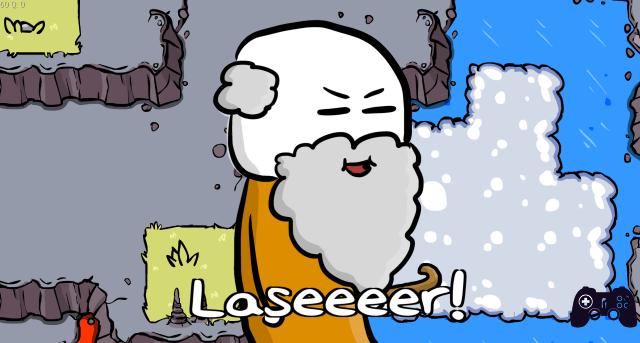 How the crowdfunding phenomenon has allowed the independent market and its ideas to arrive in the homes of players even without resorting to publishers or other intermediaries (and how this system has managed to attract the attention of some big names in the industry, too, like Keiji Inafune and Tim Shafer) we have already spoken several times, following stretch goal after stretch goal various campaigns on Kickstarter or reporting more than a few initiatives born on Indiegogo and the like. We could not therefore refrain from reserving the same treatment for Eppela and Super Cane Magic Zero, a project born from the "team up" between the Bolognese Studio Evil and the cartoonist Sio (whom you probably know thanks to Scottecs). After following the story in a "passive" way, now it's finally time for the road test: we have in fact tried the Arena mode of the title for you, and what follows are our impressions.

Before getting to the heart and talking about the arena mode, it is time to summarize (more or less) quickly what we know about Super Cane Magic Zero. The background sees a powerful magic wand (owned by the Pie Wizard, who died of a sneeze) ending up in the paws of the dog AAAH !, with catastrophic consequences for the world: rivers turning into steaks, grass turning into lava and others. absurd situation that those who habitually read Scottecs can imagine. The protagonist, Coso, must then retrieve the wand using the main skills, that of "believing in things" (making possible things such as walking on lava) and that of "throwing things". From a playful point of view, the title promises to be an action-RPG inspired by great classics such as The Legend of Zelda, where, using the two main mechanics, the player will have to explore seven different areas in search of magical objects. In conclusion, the potential to bring out a product that manages to entertain both in terms of gameplay and style is all there, but to give a more in-depth judgment it will be necessary to touch at least part of the campaign.

You seem to have finished the risotto

The arena pits up to four players against each other, with a nod to the world of Scottecs

The multiplayer mode, which apparently will only be usable locally with up to three friends, focuses on the mechanics of "throwing things" and offers some arenas (in this first taste we tried one) and four characters taken from the world of Scottecs: in addition to Sio, the player can play as Nonno Laser, Doctor Culocane and Flascio. The aim of the game, predictably, is to throw the different objects on the map (such as stones, bananas, the wand of the Cake Wizard and Japan) to the adversaries, in order to stun them and throw them in the lava or off the map to accumulate points. Whenever damage is taken instead a certain amount of energy is accumulated, which once the bar is filled can be released to perform a unique special move for each character (Sio will summon nuts, Doctor Culocane a jet of water on the head of the opponent, Flascio will drop lightning and Nonno Laser will use lasers). There is no shortage of inside jokes and references to both the world of Super Cane Magic Zero (hitting AAAH! With the magic wand, its magic will change the "geography" of the map) and that of Scottecs, with for example the presence of the number 7 among the weapons or the instant death of Doctor Culocane in case he ends up in the water. From a technical point of view, even though it is an absolutely not definitive code, the arena behaves very well, not giving particular problems from the point of view of performance and punctually following the movement of the players, widening the frame as they move away. There is some difficulty instead from the point of view of the customization of the commands (Super Cane Magiz Zero supports both controllers and keyboard on PC) due to a bug in the options menu, but as mentioned this is a preliminary version of the product (and Studio Evil is already working on the problem).

Comment Super Cane Magic Zero is a product to definitely keep an eye on. The potential to bring out a funny title both in terms of mechanics and stylistic is all there, and in this sense the presence of Sio acts as a guarantor regarding the absurdity of the situations and the "nonsense" tone of the experience . The Arena mode allowed us to get a first taste of the main mechanics of the game (or at least of one) and in any case it can be played without problems and, especially if you play with three other people, it guarantees a certain amount of fun. . Precisely for this reason it is a shame to see it limited to a use only locally Pros and Cons ✓ Lots of "nonsense" potential
✓ The arena is fun, especially in 4
✓ The single player bodes well ... x ... But we still know too little
x The multiplayer seems to be local only

Do you want to be a video game expert and know all the tricks, guides and reviews for your video games ? Holygamerz.com is a group of video game fanatics who want to inform you about the best tricks, guides and tips. We offer you the best information to be a reference in gaming, so here you can find guides, tricks, secrets and tips so you can enjoy your games to the fullest. Are you ready to get all the achievements of that game that you resist so much? Enter now and enjoy your favorite video game to the fullest!
Yakuza 0 review ❯