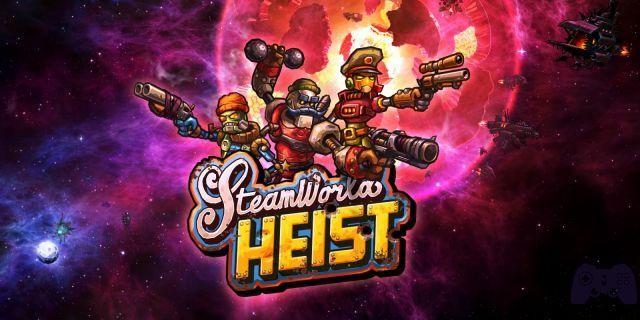 After three reviews on our pages, between 2015 and 2016, how can I make the fourth analysis of this indie and non-indie masterpiece interesting? Let's find out!

Ah, Gothenburg, the city of the only Swedish football team to have excelled in Europe, raising the prestigious and defunct UEFA Cup twice, and of a small development studio among the most brilliant in circulation, Image & Form. The software house of Brjánn Sigurgeirsson - a registry tongue twister - is closely linked to Nintendo; from being the first European studio to have received the Switch dev kit, back from their first release, the almost unknown SteamWorld Tower Defense for DSi Ware, from which all the steambot mythology and their steampunk-hued imagery was born western, which over the years has become an irresistible refuge for a gamer addicted to three-dimensionality and yet never satiated with 2D wonders. If the Dig stream is a curious and delicious mix of metroidvania and Dig Dug, Heist takes everything Cliff Bleszinski gave to third-person shooters, it crushes it in two dimensions and gives it a more thoughtful life, sly, strategic. Heist has always been my favorite, despite having adored and deeply excavated the epics of Rusty and Dorothy, Piper Faraday and her crew have forever earned a place in my hall of fame, protagonists of a space opera with the attributes of 'steel. We are talking about a real modern classic, today in better shape than ever with a sparkling one Ultimate Edition including every DLC released so far (therefore also the “The Outsider” campaign), exclusively for Nintendo Switch. And it's still like it's the first time.

After the unfortunate explosion of the Earth, the steambots are trying to rebuild their culture and society up there, in deep space illuminated by the dying core of a planet that now looks like a puzzle scattered here and there. All in all, however, the antiquated robots did not take the opportunity to progress; there is a decidedly authoritarian monarchy, a godless outlaw gang that annoys every soul and in between, borderline as only the best heroes can be, Piper and her henchmen, screwed up, vaped and rusty, organized like the best pirates of the Caribbean tradition, ready to help others as if to make money to replenish their arsenal and their ego. A natural talent for not making their own business that will lead them into the middle of a frightening alien mystery, between a lexicon from the far west and an exciting script that "Star Wars who?", All designed around a gameplay to be taken in massive doses for an exhilarating strategic overdose, providentially turn-based. SteamWorld Heist is the apotheosis of coverage, of gambling, of the break-in. The neuronal flash that tells us atavistic when it's time to pull the trigger, aiming from distance while the arm of our alter egos squeaks and the aim swings between the hull of the spaceship just boarded and the head of a cursed Scrapper. A work that manages to give a unique flavor to the shootings, the one that leaves a ferrous taste in the mouth, details and secrets that often not even the greatest developers are able to add and reach; the final shot in slow motion that will leave the unfortunate on the ground in a thousand pieces, a stray bullet that will make the hat fly off our head in pure spaghetti western style (there is plenty to fill an entire boutique), the animations, good heavens animations. The game has always been familiar to the player, leading him to experiment with always different tactics, making turnover with the characters, apogee of the easy to learn hard to master to be played strictly on Veteran difficulty to understand all the philosophy behind the project and its mechanics. The moment of the strictly "dark" raid in a room full of enemies is adrenaline and Heist leads you to never get enough of these moments, giving us tons of them in a continuous crescendo of challenge and rhythm lasting over 20 hours.

SteamWorld Heist is the art of creative break-in, stage planning and then bullets hissing and bouncing everywhere. Strategic doses of adrenaline from which it is impossible to detoxify.

No video game had ever managed to convey so well the idea of ​​preparing for the unknown, to bullets hissing left and right, too bottled up in highly scripted passages that subtract any pleasure from manual skill. You have to keep in mind the ability to move, the positioning of cover and the skills of each character, then you can give the "the" to the most creative ignorance.

Ivanski opens a hatch, goes to the nearest shelter and aims his grenade launcher at an explosive barrel between two rusty Scrappers who are steaming history within seconds. "Sea Brass" charges by firing a cloud of buckshot at the closest criminal in range, while Piper stays covered, holding her laser sight revolver to play carom against the walls and blow the head of the last one who dares to stay. standing. And then off to the big target, a precious loot, rare weapons, vital water supplies, between alarms that go off, turrets that reveal themselves from the ceilings, enemies that come in waves, cover fire and breakneck escapes towards the 'nearest exit, hunted down, screaming "you will never have me, infamous!".

One cannot remain staid, we cannot remain serious while we are stuck in this semi-procedural good of God, with an excellent design base for each level, around which the game decides how to arrange the rooms, the enemies, the treasures, as if it were a sentient and emotional being, ready to throw the gauntlet on us. Challenge it does balancing act between fun and difficulty, with tense boss fights and "tot" stars per level that desperately ask to be collected all, basically without reporting losses and grabbing the most precious treasure chest, adapting to new enemies and increasingly thorny situations. Virtuous circle that hates trial & error, so much so that restarting a mission without first putting the neck bone back will involve a penalty in precious gallons of water, the currency of the game, a tax that will recur even in the event of a game over. Right, because the game is so perfectly designed that death is a simple consequence of our most stupid and daring actions. SteamWorld Heist takes its key mechanics to extremes and makes it an art, which is the secret of the greatest playful masterpieces. 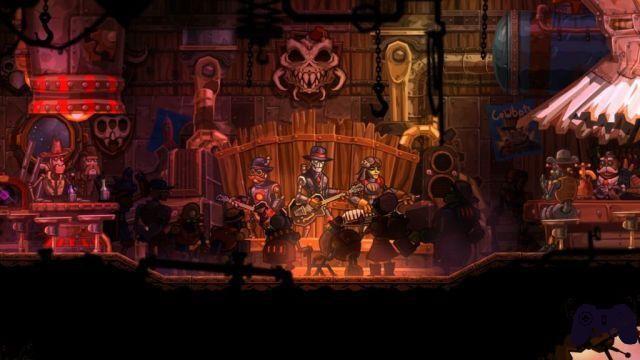 And then there is the aesthetics, sublime, cartoonish, with great attention to detail, like the eye that squints when aiming. Space taverns teeming with bots, Steam Powered Giraffes in concert, their country smelling country, warm and welcoming like a mug of beer after facing the royalist army. Hand-drawn backdrops ranging from the decay of Scrapper ships to government opulence, to alienating and distressing alien architecture. Each character hatched to remain imprinted in the player's retinas, some with a wheel instead of legs, some horribly modified, others extremely "human", each with their own tics and puffs of steam. Lines of dialogue that always travel on the edge of humor seasoned with the slang of the American province, risky similes and a deliciously old-fashioned jargon. To do the lion's share, in this sense, will be the chats with their companions, with hilarious anecdotes, reflections on their lives and an irresistible braggart. A product packaged in a sublime, artisanal way, with very high production values, even musically. The never-ending tour of the aforementioned Steam Powered Giraffe will fill every place we set foot with folk notes during our mission on the road, splendid tracks of which I give you a taste below, absolutely perfect in their mix of acoustic guitars, violins, choirs and synthesizers, in pure steampunk style, where the future meets the past. To act as an interlude between one track and another, or in the gameplay phases, decidedly more tense music, electronic, almost alien, able to keep the player always on the "who goes there", reminding us that we always play away from home.


Verdict 9.5 / 10 As before, more than before, I will love you Comment SteamWorld Heist is a masterpiece that will stand the test of time at least until the arrival of a highly anticipated second chapter. A well-kept, sensational game, with hilarious mechanics and a spicy challenge capable of giving satisfactions and feedback of great playful pleasure. Image & Form is a special team capable of giving its titles a "crunchy" soul, able to remain etched in the minds of the most demanding and curious players with products with a unique charisma. A cocktail of turn-based strategy, shooter and a pinch of platforming that, together with the delicious Mario + Rabbids Kingdom Battle, has managed in recent years to renew a genre anchored for years at the bottom of certainties. Sparkling. Pros and cons ✓ Sublime 2D strategy
✓ Irresistible audio-visual aesthetics
✓ A gameplay that can no longer be done without
✓ Ultimate Edition of a masterpiece x It will also be long-lived, but unfortunately it ends
Do you want to be a video game expert and know all the tricks, guides and reviews for your video games ? Holygamerz.com is a group of video game fanatics who want to inform you about the best tricks, guides and tips. We offer you the best information to be a reference in gaming, so here you can find guides, tricks, secrets and tips so you can enjoy your games to the fullest. Are you ready to get all the achievements of that game that you resist so much? Enter now and enjoy your favorite video game to the fullest!
Ori and the Blind Forest review ❯

King's Quest: Rubble Without a Cause review