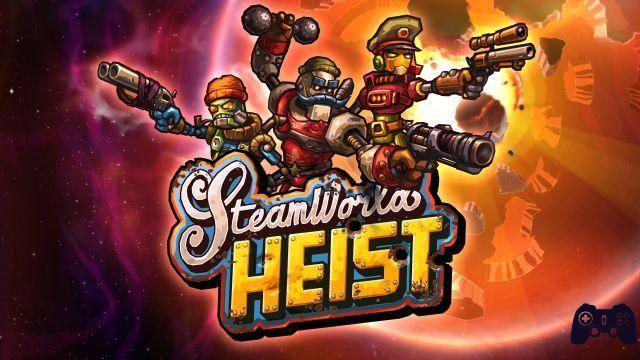 About six months ago, our Guido had the opportunity to get his hands on a small pearl of the independent panorama on 3DS from the name of SteamWorld Heist, third chapter of an all-steam saga that seems to have the curious (and pleasant) tendency to evolve a little more with each single episode. In recent weeks, the turn-based strategy of Image & Form it also landed on some more “homey” platforms, bringing its steam bots up PC and, among others, PlayStation 4. For Holygamerz, the time has returned to dive into the depths of deep space, once again accompanying Piper and her crew in shootings full of bouncing bullets and debris on the floor.

In the transition from 3DS to PlayStation 4, the fascination of SteamWorld Heist has remained essentially unchanged: after the destruction of the Earth, the last bastions of human society have survived in the "Steambots", steam-powered robots that rely on water to survive. A crew of smugglers (led by the cowbot Piper F) it will find itself involved, for a series of circumstances, in a large number of unfortunate events that will force them to face dozens and dozens of enemies in the most remote depths of space; all narrated with a splendid humorous and comic style that will tear more than a smile during the adventure.

The approximately 15 hours of SteamWorld Heist (more or less long-lived depending on the skill of the player) run smoothly for most of the time, also with regard to the splendid technical side: the very light graphic engine - characterized by typical comic book traits, with an attention to detail that has almost of the manic - is handled perfectly by the console, allowing the whole experience to move from start to finish without any really noteworthy slowdown. And, when it comes to getting involved on the audio front, Image & Form's little gem stands solid as a rock, with a main theme that will struggle to get out of your head and with a slew of curated and extremely pleasant.

A glass of water, please

The world of SteamWorld Heist it goes on mainly with gallons of water, and that will be our main currency during the game: by collecting loot ("swag" in the original language) during the missions, the steambots of the crew will be able to assemble their own personal treasure, with which to buy weapons, accessories and hats.

And the hats are perhaps the most curious component of SteamWorld Heist: even if it has no use other than simple aesthetics, collecting the nearly 100 hats will become such an addictive occupation that it will be inevitable to try to snatch a new headgear from an enemy every time we have the opportunity. Many of them, moreover, will be a real tribute to a particular element of pop culture, from the crown of the Dark Lord to less obvious and more complex references to understand, with the sole intent of snatching a smile from those who go to read the descriptions of each headdress.

Even on the weapons front, then, the most demanding will have nothing to complain about: Piper's crew will be divided into real "classes", which will require specific weapons with their own peculiar characteristics. This translates into over 100 weapons that you can buy (and find) over the course of the game, a gigantic arsenal that can be adapted to any style of play - from the most tactical to the most shootout. 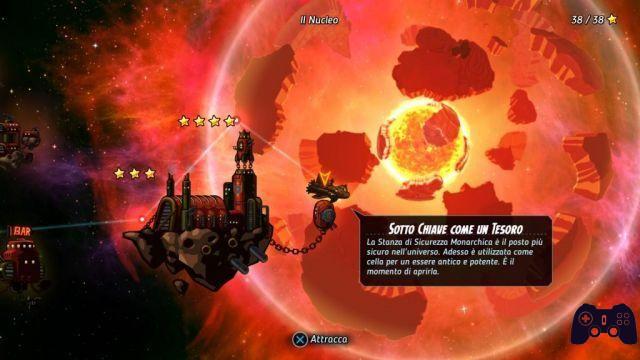 Blessed be the "Skip" button

As already mentioned at the beginning, SteamWorld Heist is a turn-based strategy that mixes RPG elements with the formula. All movements during the missions (whether they are survival, sabotage, elimination or loot collection) will therefore be entrusted to a system that will require the player to move gradually through the level and, if possible, shoot the enemies that are around. for the various rooms. To add some 'color' to the challenge, all rooms will be darkened until the player is able to enter, making it essentially impossible to truly plan their strategies before setting foot in the next step. The player's adaptability will be constantly put to the test by the gameplay, resulting in an ongoing challenge that only rarely proves to be truly frustrating.

A slightly too mechanical shift system

Sometimes, however, it may be necessary to at least plan one's movements over the course of subsequent shifts, saving time and steps that, in a two-dimensional environment governed by a grid, could be quite annoying to manage with a pair of analog sticks. The developers have implemented the "Skip" button (triangle on PS4) to make the movements of the characters less tedious, but this does not mean that the aiming system still works in a somewhat too mechanical way, which often forces the player to adjust this or that trajectory over and over again before finding the perfect angle. 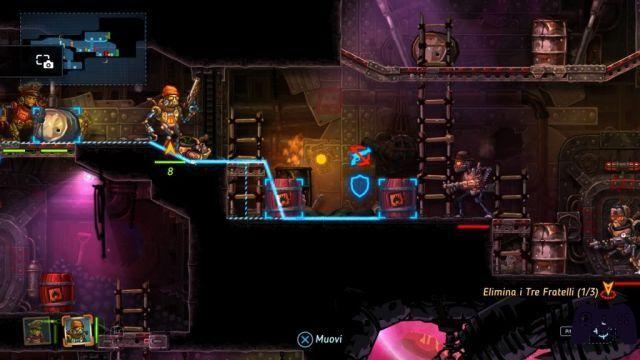 There is no doubt, therefore, that the entire control system has been designed to work perfectly in a touch environment or, at least, governed by a mouse and a keyboard; and, despite this small flaw, the entire gaming experience of SteamWorld Heist continues to be extremely enjoyable on a home console, with the right longevity and a splendid character-design as the background to a satisfying gameplay formula. 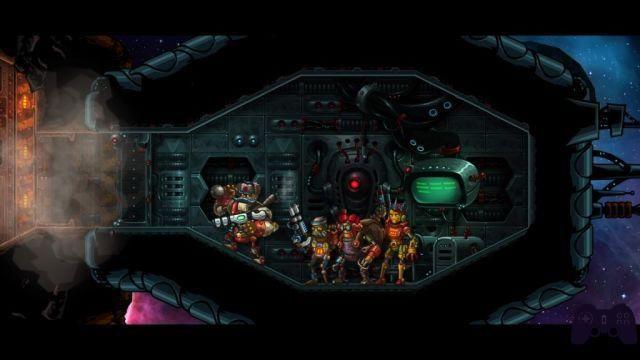 The few defects mentioned above are really irrelevant compared to the size and beauty of the imagery that inspired the jewel of Image & Form, an imaginary made of steampunk and pure science fiction together. SteamWorld Heist, therefore, deserves much more than a chance for a bored user looking for "something memorable", especially for a fan of turn-based strategy: and, if you have Xbox One o Wii U, do not despair: the developers have declared that they want to release their title also on the latest two consoles Microsoft and Nintendo by the end of the year, and it's only a matter of time before you can get your hands on this little gem of the independent landscape.

Verdict 9/10 I lose air everywhere Comment Steamworld Heist is a real diamond, a star in the independent panorama already reported several months ago for 3DS and now landed on PC and Sony consoles for a large number of other users around the world. With the mastery shown by the developers in mixing steampunk and classic science fiction, to miss such a title, for a fan of both genres, would be an unforgivable sin; and, thanks to its incredible attention to detail and irresistible gameplay formula, there is no doubt that Steamworld Heist is worth every single penny of the price it sells (€ 19,99 on PlayStation Store). Pros and cons ✓ Irresistible graphic style
✓ Addictive gameplay
✓ Phenomenal level-design
✓ Sound with attention to the smallest details x Slightly cumbersome control system
x Unable to schedule subsequent shifts
Do you want to be a video game expert and know all the tricks, guides and reviews for your video games ? Holygamerz.com is a group of video game fanatics who want to inform you about the best tricks, guides and tips. We offer you the best information to be a reference in gaming, so here you can find guides, tricks, secrets and tips so you can enjoy your games to the fullest. Are you ready to get all the achievements of that game that you resist so much? Enter now and enjoy your favorite video game to the fullest!
Guides Seventh Season Battle League [awards] - Pokémon GO ❯

The Legend of Zelda: Ocarina of Time 3D review