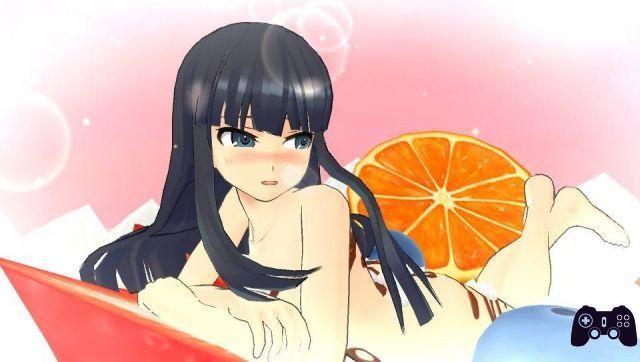 Cleared with Senran Kagura Burst, the series of the prosperous fighting ninja is getting, chapter after chapter, more and more visibility and successes in the West, where thanks to its strong fanservice it has managed to attract the attention of the most savvy players. After a scrolling brawler on Nintendo 3DS and a sort of rose water musou released a few weeks ago on PlayStation Vita, from today the Senran Kagura series is enriched, always on the laptop at home Sony, of a new culinary-themed spin-off with rhythm game dynamics.

They will be successful Asuka, Nomura, Ikaruga and the beautiful ninjas of Senran Kagura to conquer us again?

Abandon the furious struggles of previous games, in Senran Kagura: Bon Appétit! we find a more relaxed and light-hearted atmosphere. Even the reasons that push the girls to give themselves to the kitchen immediately appear as a pretext to start new developments, which will see us committed to participating in the Super Dish Gourmet Cook-off, a culinary contest where we will have to make our way by preparing the best possible dishes and obtain an ancient ninja parchment capable of fulfilling every wish (or maybe not?). Driven by this goal, the girls will participate en masse in the tournament, each intent on winning the coveted prize.

The game is divided into 3 main modes. The Story Mode allows you to experience in the form of the now abused visual novel formula the story from the various points of view of the young shinobi, which develops between one clash and another, giving decidedly hilarious moments. It's unbelievable how much she nevertheless gives always the series is based on situations bordering on the rough succeeds, thanks to the change of setting, to go beyond an even more equivocal and decidedly embarrassing context. In addition to the story mode we find two other game options, that one Arcade, skimmed by the narrative part that re-proposes the battles of Story Mode and the Free Mode, which allows us to tackle one of the songs at our leisure.

To these is added the inevitable Dressing Room, in which we will be able to spruce up the girls to our liking with the clothes and accessories unlocked by playing and interacting with them.

It's big and doesn't fit

In terms of mechanics, the game is reminiscent of a cross between Project Diva and Taiko no Tatsujin

In terms of mechanics, the game resembles a middle ground between the series of Vocaloid Hatsune Miku, Project Diva, and the rhythm games of Namco, the evergreens Taiko no tatsujin. Following the imprint of the two games, Bon Appétit! it offers a setting that is simple enough as it is immediate to master. Arranged on two timelines, the beats to be played will flow from right to left, ending their run in a special indicator. Pressed with the right timing, each beat will contribute to forming our score, leaving room for the following ones, which will alternate on the two bars. To ensure that our action goes to completion we will have to press the corresponding button that appears on the screen, divided between the directional ones or one of the 4 on the push-button panel (X, Circle, Triangle and Square). The higher the selected challenge level, the greater the amount of keys to press, with an ever increasing difficulty due to the different combinations proposed. In addition to simple taps, we will find sequences in which the beat must be maintained for its entire duration or others where multiple presses will be required, completing the minimum number required on the screen.


Overall it is a fairly simple and derivative game system, but at the same time aSome of the songs present even at a normal level require good dexterity and good concentration not to miss a beat, trying to get a good score. Precisely in this context there is also a bonus, which can be activated by pressing one of the back buttons as soon as the appropriate indicator is filled. Once active, the duration of its effectiveness will be bound to the mistakes made, therefore, missing a joke will mean losing the bonus, forcing us to fill the bar again.

Do you have a sushi roll in your pocket or are you just happy to see me?

Each round is divided into 3 different phases, but all with the same purpose: to overwhelm our opponent by winning the favor of Hanzō (founder of the ninja academy of the series), here as a judge, thus bringing home the meeting.
While we will be busy pressing the beats in time, on screen the protagonists of the cooking challenge will be intent on preparing the most delicious dishes that will then be judged and evaluated. Conquering the stages is essential and will bring us closer and closer to the final victory. Not only. By obtaining the approval of Hanzō we will be rewarded with a portion of the heart, an icon that if completed, allows you to activate a bonus section during the preparation of the course, by inserting a special bar within the song, which will give us a very close view of the challenger. Yes, because every won part of the song, we will go to rage on the challenger's clothes, which will tear leaving room for skin and roundness, until we win, stripping it completely.


Concluding the round perfectly we will be able to see our newly defeated opponent lying in a provocative way on a dessert. And yes, this represents one of the greatest moments of fanservice offered by the game, in which the player, as a true maniac, will be able to admire the 3D models of the girls from every angle, simply by using the motion sensors of the console.

Bon Appétit arrives maimed and devoid of half of the full cast, which can be purchased separately in the form of DLC

The game offers a dozen characters, and as many songs that alternate between instrumental and sung pieces. While the quality of the former is pleasant to listen to, the latter will perform at their best throughout the game, and we regret that the presence of these is limited in number given the good performance.

Here then also a decidedly thorny question arises. Senran Kagura Bon Appétit comes to us, in digital format only at a price of € 14,99. A good price that is certainly affordable but does not represent the entirety of the title.
Bon Appétit arrives maimed and devoid of half of the complete cast, which can be purchased separately in the form of DLC, forcing you to put your wallet in case you want to complete the entire roster. The same goes for the pieces that make up the soundtrack, which can also be purchased separately, fincreasing the final cost around 30 euros.

Technically Bon Appétit! offers the essentials for a rhythm game. The attention will be focused on the part dedicated to the core of the game, removing the attention from the young kunoichi struggling with the stove, all made with good 3D graphics, colorful and well animated.

The main dish, however, are the models of the girls, admirable in all their glory during the "perfect victory" voyeuristic, where the naked bodies of busty girls will be placed on delicious desserts and garnished with cream and chocolate topping.

Verdict 7/10 Add butter, just enough. Comment Senran Kagura: Bon Appétit! is undoubtedly a title addressed mainly to all lovers of the series, who now addicted to the excessive fanservice of the game, will find a new injection of B-sides and prosperous breasts. The rhythm game dynamics are appreciated for their simplicity, managing to entertain and offer the right level of challenge. Speech apart for the price of the game, which although affordable, to get all the available content it will be necessary to have to put your wallet again. Pros and cons ✓ The boobs, the cream and the chocolate topping
✓ An appreciable rhythm game structure
✓ Catchy OST
✓ Did we say boobs? x Few songs sung
x Those who don't like the series or fanservice might find it in bad taste
Do you want to be a video game expert and know all the tricks, guides and reviews for your video games ? Holygamerz.com is a group of video game fanatics who want to inform you about the best tricks, guides and tips. We offer you the best information to be a reference in gaming, so here you can find guides, tricks, secrets and tips so you can enjoy your games to the fullest. Are you ready to get all the achievements of that game that you resist so much? Enter now and enjoy your favorite video game to the fullest!
News Microsoft acquires Obsidian Entertainment and inXile Entertainment ❯