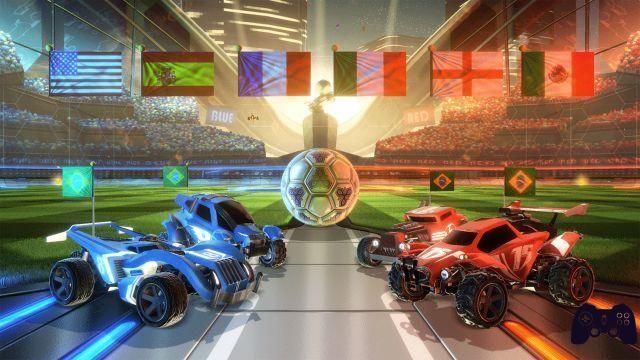 Supersonic Acrobatic Rocked-Powered Battle-Cars it was a title capable of conquering a loyal group of fans thanks to a simple, fun, innovative and capable of entertaining gameplay during the long evenings in the company of friends. Here then, thanks to a well-established fan base, the guys from Psyonix have decided to release Rocket League, a real follow-up to their previous work. Will they be able to win the sympathy of gamers once again or are we faced with a mere commercial operation? Find out in our review! Finally, we remind you that the title is available for PlayStation 4 and PC (complete with Cross-Play function) at the price of 19.90 €, while for subscribers to the PlayStation Plus service it can be downloaded for free starting from 7 July.

Rocket League, like its predecessor, puts us at the helm of a series of toy cars armed with rockets with the aim of sending a ball into the opponent's goal. Despite the crazy premise of the title, Supersonic Acrobatic Rocked-Powered Battle-Cars sequel manages to entertain like few other games on the market, guaranteeing hours and hours of fun in the company of friends. Once again, moreover, the title proves simple to learn, but difficult to master, encouraging the player to continuously improve in order to defeat even the most experienced players. The careful use of the turbo engine, available through the multiple power ups scattered around the field, is the element capable of making the difference between victory and defeat; especially considering that it is also possible to activate it in the air, thus allowing us to carry out very useful aerial maneuvers. Always the turbo, finally, allows us once accumulated to gain great speed and to clash against opposing players by disintegrating them and putting them out of the game for a few seconds (necessary to quickly advance towards the open door).

The multiplayer component is the strength of Rocket League

Compared to Supersonic Acrobatic Rocked-Powered Battle-Cars, Rocket League offers multiple additions. First of all, the possibility of earning, as you progress through the game, new cars and new parts (wheels, flags, paints, hats) to be able to customize your vehicle and make online games much more pleasant and varied to watch. It was also added an offline mode that allows the player to face a series of races against bots to win the coveted championship cup. Championship which, moreover, it will be possible to set according to some parameters such as the number of cars per team and the duration of the season. For newcomers to the series, however, there is now the possibility of training in a special section thanks to the Training mode which, after selecting the game difficulty (three are available), will allow us to train ourselves in shots on goal, in flying shots and parades, preparing us for the main component of the title: the challenges against other players. The multiplayer component is the strong point of Rocket League which, meeting all tastes, allows users to face each other in challenges online, offline (with a split screen up to 4 players) and both possibilities together. It will be possible, in fact, to play with three friends in your living room and decide to challenge other players online, increasing the fun not a little. However, we must admit that we have encountered some problems related to the game servers, but we are sure these are inconveniences due to the large turnout of these first days and which the guys from Psyonix will remedy as soon as possible. Another small flaw, which the developers will fix shortly through free DLCs, is the presence of a single playing field which, despite the various settings, makes the games sometimes too equal.

Between rockets and explosions

From a technical point of view, Rocket League defends itself very well

From a technical point of view Rocket League certainly defends itself very well, with eye-catching graphic effects, an accurate vehicle modeling and with the total absence, in any situation, of drops in the framerate. Despite the lack of a main theme as worthy as that of its predecessor, aeven the sound sector manages not to disappoint expectations, despite being devoid of incisive traces able to remain in the mind of gamers for a long time.


Verdict 8/10 But what rocket is going on? (cit.) Comment Rocket League is a title capable of entertaining like few others in circulation and this thanks to a gameplay as simple to learn as it is difficult to master. The small (and remediable) defects certainly do not affect what, most likely, will become one of the main titles during your evenings with friends. The only thing to do now is to warm up the engines, aim for the ball, collect the turbo and make as many goals as possible while waiting for future DLCs (free) with which to expand the gaming experience. Pros and cons ✓ Very funny
✓ More varied than the predecessor
✓ Multiplayer that will satisfy everyone
✓ Solid framerate x Only one playing field
x Servers not quite stable yet

Do you want to be a video game expert and know all the tricks, guides and reviews for your video games ? Holygamerz.com is a group of video game fanatics who want to inform you about the best tricks, guides and tips. We offer you the best information to be a reference in gaming, so here you can find guides, tricks, secrets and tips so you can enjoy your games to the fullest. Are you ready to get all the achievements of that game that you resist so much? Enter now and enjoy your favorite video game to the fullest!
Guides Guide to Rhymes Challenges - Assassin's Creed: Valhalla ❯

Minecraft: Story Mode Episode One - The Order of the Stone review