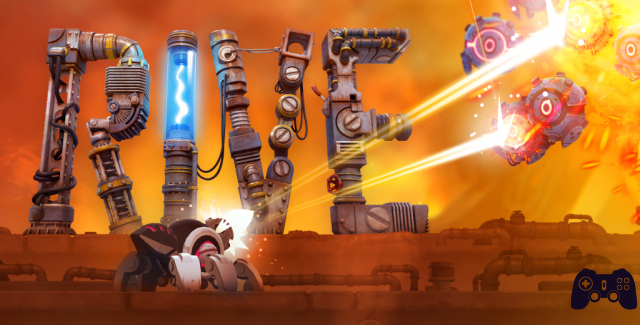 If you hang out in the undergrowth of independent development you will surely have come across the name of Two Tribes, Danish development team, which undoubtedly stands out among the various projects they have worked on in the past Toki Tori (with its sequel). Two Tribes is ready to return to the scene with their latest title, RIVE, a 2D side scrolling that draws heavily from the past of the genre, mixing and shaping at its service a gameplay made up of platformers, dual stick shooters and scrolling shooters. Last title in every sense, as Rive represents (at least to date) the end of the team's production activities, as announced by an open letter that appeared on their blog. Available at the price of 14.99 € on PlayStation 4, Xbox One, Wii U and PC, RIVE is ready to make us sweat 7 shirts in the company of the bearded Roughshot, space explorer with a nerdy soul.

RIVE is really as difficult as it says it is

When a game starts and the only mode available is the hard one, maybe we need to ask ourselves a few questions. RIVE, the latest effort of Two Tribes is like this, self-deprecating from the very first menu, even if this irony conceals a bittersweet truth: RIVE is really as difficult as it says it is.
Lost in space in search of treasures, the intrepid Roughshot will find help inside an orbital station, where he will be welcomed and guarded by a not very hospitable robotic AI. In a short time the poor Roughshot will understand that it is not air, and inside the base all the robots present are ready to turn against him, thus preventing his escape.

Behind this simple beginning hides a title that unexpectedly makes of his story one of its strengths. Roughshot is a breezy, sarcastic character with an innate pessimism who, even in the midst of a crisis where he potentially recalls life every second, manages to shoot jokes and quotes worthy of the best hardened nerd, dampening the tension between one death and another. .

Why yes, RIVE is tremendously difficult. But of a difficult good, who despite doing everything to discourage you, you can find the audacity to go on, with that "I try one more time and then I detach", Which we have sighed many times accompanied by"ultra-combo of curses”To the umpteenth game over, but that saw us sticking together for hours until we came out as winners.
Every minute spent in the company of RIVE manages to surprise. Not just this well-timed quoteism either an unexpected (and continuous) break in the fourth wall, in which the dear Roughshot turning to us will not spare a few vitriolic jokes, but also thanks to a gameplay so well constructed and amalgamated as to make every game a real joy.

As mentioned above, RIVE mixes different gameplay elements from various genres, from that of dual stick shooters to platform classics, creating a game solution in which all these "extracts" become complementary to each other. A gameplay that sometimes calls for a certain Metal Slug, and it does so from our vehicle whose resemblance to the Super Vehicle-001 it is not accidental, capable of transforming itself into a spaceship when necessary, completely changing style and gameplay, and creating an always perfect continuity.
During the platforming game phases we will be able to wander around the space station by jumping, relying on the pressure of the left trigger (initially a not very intuitive choice) and shooting at enemies by directing fire according to the angle of the right analog. 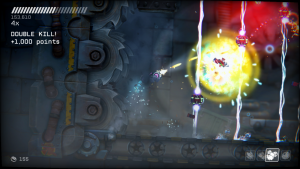 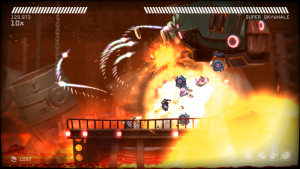 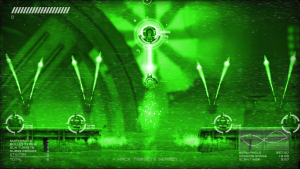 By collecting the pieces left by the downed enemies we can exchange them for upgrade our paraphernalia and unlock one of the 4 secondary weapons available (a series of homing missiles, a powerful short-range compo, bouncing mines and a sphere capable of slowing down enemy movements) that can be quickly equipped by pressing the buttons on the front panel of the pad.

As the story progresses, we will also come into possession of some "viruses" that will allow us to hack control panels or subjugate some of the enemies to our will, which by taking our side will provide us with precious help, taking care of us, attacking opponents or allowing us to overcome otherwise inaccessible areas. 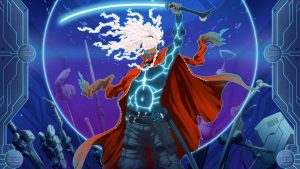 RIVE will do everything to make us feel good

RIVE in its 5/6 hours of gameplay offers a variety of situations capable of confusing the player and never get bored. In an instant you pass from quick escapes inside the corridors of the station, perhaps chased by flocks of death-thirsty enemies, to speeding through space among a shower of asteroids trying not to be crushed by some meteorite, in lateral sliding sections pay homage to the shoot'em up genre (someone said Gradius?).
There are also moments in which we will have to put aside our arsenal and wander around some submerged sectors avoiding death at every step, or testing our nerves in an attempt to overcome endless waves of enemies under an incessant rain of bullets, all, like defined by its authors, performing the "dance of destruction", to indicate a 360-degree gameplay where to get the better of the game, we will have to constantly move while dodging enemies with movements that will recall those of a "dance". Because RIVE will do everything to make us feel good, and only perseverance can help us to move forward. 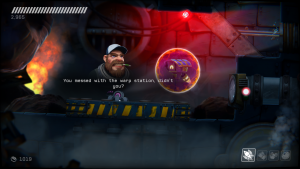 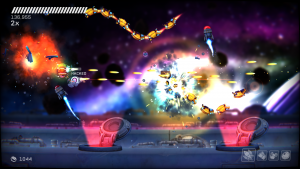 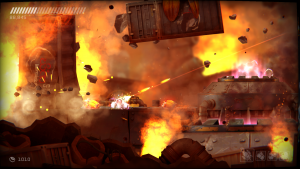 Fortunately, tooand his being difficult is well studied and balanced, thanks to numerous strategically placed checkpoints that allow us to restart the game after one of the many (too many) game-overs. Always remaining on the theme of the level of the challenge, this will be constantly high, cculminating in more than one occasion to appear on the scene of the end-of-level Bosses, who will promptly have no qualms about eliminating us in a matter of seconds. And despite his ruthlessness, RIVE is an honest title in which every mistake made, every single death, must be attributed solely to us and to our mistakes, showing how solid the gameplay is and devoid of any smudging, even in the most chaotic situations.
Once you get to the finale and find out what Roughshot's fate will be we're going to unlock two new game modes, which will make that difficult beginning of the adventure appear a walk: the Fast Mode, designed for speedrunners where every single second wasted means losing places in the online ranking, and the Single Life Mode in which, as the name suggests, we will have only one life available, which once lost will force us to restart the mission from the beginning.

Rive guarantees a perfect fluidity to say the least

RIVE in addition to offering one of the most accurate gameplay that we have had the opportunity to try in an independent production, it also flaunts a respectable technical sector without too many problems, using a graphics engine capable of managing the schizophrenic action of the Two Tribes game without uncertainty. Each element on the screen is made in 3D and beautifully animated, including explosions, light effects and particles, all without the slightest slowdown even when the screen is invaded by enemies and we will not know where to turn our heads. A fluidity to say the least perfect, without which it would be difficult to take even a single step within the game. Even under the sound profile we can only praise the work done, both for the dubbing (in English, while the texts on the video are in Spanish) well characterized by Mark Dodson, which became famous in the 80s for giving voice to the Gremlins, and for the music that accompanies the adventure, many of which boast a retro charm.

Verdict 9/10 Dying will be the last of your thoughts Comment Rive is one of the most interesting and fun independent titles of recent years. A farewell letter from Two Tribes that demonstrates not only a certain technical virtuosity, but passion and dedication to one's work. Being able to mix so many different styles together and make them coexist in a single gameplay was a risky operation that fortunately paid off, and the excellent result is there for all to see. But not only that, in the handful of hours that Rive will steal from us, he manages to conquer us also thanks to the comic and irreverent style of his protagonist who finds himself living an adventure that he probably would have gladly done without. If you are a lover of difficult and demanding titles, but who know how to give you the right emotions once the obstacles have been overcome, RIVE has all the credentials to break through your heart. Pros and cons ✓ Technically flawless
✓ Great mix of genres
✓ Difficult but well balanced ... x ... For some perhaps too difficult
x Management of the jump initially not very intuitive
Do you want to be a video game expert and know all the tricks, guides and reviews for your video games ? Holygamerz.com is a group of video game fanatics who want to inform you about the best tricks, guides and tips. We offer you the best information to be a reference in gaming, so here you can find guides, tricks, secrets and tips so you can enjoy your games to the fullest. Are you ready to get all the achievements of that game that you resist so much? Enter now and enjoy your favorite video game to the fullest!
Guides Where to find all artifacts - Assassin's Creed: Valhalla [100%] ❯