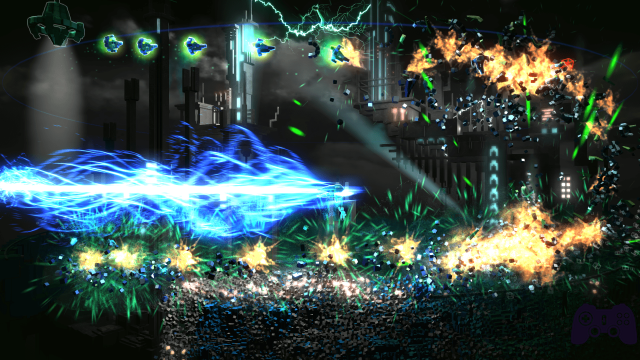 One of the most "fatal" news for players who decided to buy Playstation 4 at the launch was certainly the postponement of DriveClub: the title of Evolution Studios was in fact to act as a springboard for the next-gen version of Playstation Plus. The responsibility to present to the general public the subscription had to fall on two new titles, namely Contrast by Compulsion Games (here for our review) and Resogun, directly from the creators of Super Stardust HD and Super Stardust Delta (without forgetting Dead Nation and Outland). Will the title of Housemarque be able to be up to the task?

Save the last humans, there isn't much else to do

The playful offer designed by the developers for Resogun is essentially divided into two modes: single player and online cooperative. The two modes differ simply in the number of players, offering the same content, consisting of five levels (to be faced alone or with a friend) playable individually or one after the other in a sort of campaign by piloting one of the three different available spacecraft (each with its own peculiar characteristics). The main flaw of the Housemarque shoot 'em up is precisely the lack of content, fortunately compensated by high replayability and solid and fun gameplay.

Star Command, do you receive me?

The "saving" trend that distinguishes game content also indirectly affects the gameplay, due to the presence of a minimal tutorial in perfect arcade style. The control scheme is mainly based on the left and right analog sticks, used respectively to move the ship and to open fire (which can only be directed in front or behind the ship horizontally, excluding the possibility of shooting below or above). There is also the possibility of dropping the classic bombs of the genre by pressing the R2 button, able to annihilate all the enemies on the screen. The spacecraft's equipment is completed by two recharging power ups: the acceleration, activated by pressing L1, which makes the spacecraft temporarily invincible and allows you to take out a series of enemies by going at full speed (or simply to escape from the most difficult situations. agitated) and hyperdrive, a mode that loads as enemies are eliminated and allows once you press R1 to slow down time and hit opponents with a tremendous laser beam. Finally, the L2 trigger allows the player to (literally) launch the collected humans, so as to be able to deliver them to the collection point more quickly or if it is understood that the minutes are counted to avoid them being eliminated together with our vehicle. As in any self-respecting shoot 'em up, every game will start with a certain number of lives, which once exhausted will lead to the game over and will force you to start the level all over again.

Arcade in the soul

Forget the planets of the Super Stardust series, the level design in Resogun shows a more traditional soul and closer to the old two-dimensional shoot 'em ups. The only license that the Finnish team takes with respect to classic productions of the genre is the setting of levels, which they develop in a circular way as if they were wrapped around an invisible tubewhile remaining strictly in two dimensions. Even at the level of play, the almost "old school" arcade setting of the production is immediately clear: the player is thrown into the middle of the action without too many preambles and even the tutorial, as we said extremely spartan, is limited to giving a 'smattering at the level of controls not revealing anything either of the objectives (except for a "save the last human" recited at the beginning of each level by an outgoing voice directly from Dualshock 4) or of the mechanics behind the game score, unique and true undisputed protagonist. The aim of the game is precisely to obtain the highest score of all, recovering from the golden age of cabin cruisers: the main road is to level up the multiplier by killing as many enemies as possible (every 100 enemies killed you reach a level-up of the indicator) without letting too much time pass between one destruction and another. In parallel to this work it is necessary to increase the score also to save all the humans present on the scenario, initially trapped in some cages that are opened whenever the Keeper is killed, particular enemies highlighted in green that will remain on the screen for a short period before run away (and cause the death of the victim in the corresponding cage), or when the multiplier is reached to a certain level. Once the human has been freed, it is necessary to recover it before it is hit by enemy fire and transport it to the extraction point, an operation that occasionally also guarantees access to some bonuses such as shields, lives or extra bombs. From time to time within the level will appear upgrades for the weapons of the spaceship, as per canon within the genre. And always following the tradition there is no shortage of boss fights at the end of the level, involving mammoth mechanical bosses who must first be hit at the weak points to make their way to their core and destroy them.

Who does not shoot in company ...

If the single offer packaged by Housemarque appears (despite the few contents) fun and at the level of the previous works of the team, the online component is instead the other Achilles heel of the production. The solid and rewarding gameplay seen in the campaign is undermined when playing on the net by sudden slowdowns, which in a title of this kind appear decidedly serious and should be definitely avoided. Netcode problems aside, from a technical point of view Resogun defends itself very well thanks to a sound guess and to a graphic sector that, even if it does not break the jaw, conquers thanks to the vivacity of colors and explosions on the screen.


Verdict 8.5 / 10 We liked it "a bang" Comment After the two Super Stardust Housemarque packs a more traditional shoot 'em up but no less of character. Resogun summing up is certainly a very valid exponent of the genre, capable of entertaining thanks to its satisfying gameplay and its arcade soul to the core. The only defects are to be found in the few contents and in the not very clean netcode of the cooperative mode, but despite these problems Resogun is still a product to recommend, especially for lovers of the genre. Pros and cons ✓ Visually convincing and very lively
✓ Very solid and fun gameplay
✓ Very long-lived and replayable ... x ... But few contents
x Slowdowns when playing online

Do you want to be a video game expert and know all the tricks, guides and reviews for your video games ? Holygamerz.com is a group of video game fanatics who want to inform you about the best tricks, guides and tips. We offer you the best information to be a reference in gaming, so here you can find guides, tricks, secrets and tips so you can enjoy your games to the fullest. Are you ready to get all the achievements of that game that you resist so much? Enter now and enjoy your favorite video game to the fullest!
Penny-Punching Princess Review - Money makes happiness ❯

The Last of Us: Left Behind review