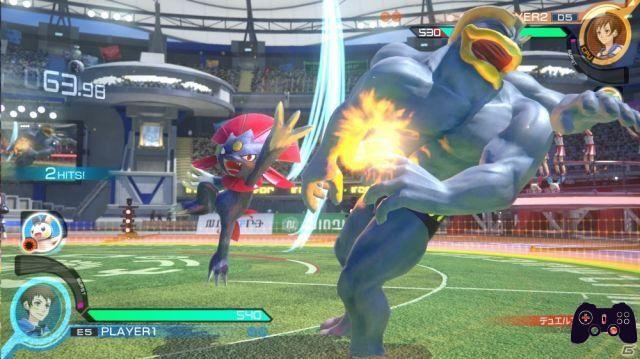 After having had the opportunity to tell you about the Arcade version of Pokkén Tournament, tested in Japan a few months ago, let's talk about the fighting game dedicated to Nintendo pocket monsters, out on Wii U the next 18 March. Compared to the Arcade version there are immediately two considerations to make. The first is that, also due to the language barrier, the last time we did not really understand the game. The second is that the version that we will see in stores in less than a month is a much more complete and profound title than we initially imagined.

While in the Arcade version we had complained about the lack of a real story mode and more generally of features aimed at the single player, the home edition of Pokkén Tournament doesn't seem to want to spare under this point of view. At the start of the game we will be greeted by the cute Nia, who will guide us through a rapid character editor, in which to customize our coach. Many of the customization options will actually be unlocked over the course of the game, but to get started you will be able to determine your name, gender, skin and eye color. We will then be introduced to the Pokkén Tournament setting: the Ferrum region. Here, thanks to the mysterious stones that this region is rich in, a new way of making Pokémon fight has been developed, the Ferrum fight. By taking advantage of a particular headset, the trainer can in fact resonate with the Pokémon in the field, effectively controlling its movements as if it were his own body. The Ferrum League is the region's official wrestling league, and is the de facto story mode of Pokkén Tournament. It is divided into 4 sub-leagues, in which we will have to make our way starting from the bottom. In each league we will have to improve our ranking by facing different opponents. Once in the top 8 managers of the leaderboard a single elimination tournament will take place to determine the league champion. At the end we will have the opportunity to take the qualification exam held by the league master, in order to finally move on to the next class. In addition to the Ferrum fight, the other game options concern single matches against the CPU, online multiplayer (which we will discuss extensively in the review), local multiplayer and training. It is worth spending a few words on training mode, where a series of 5 tutorials very well done explains the basics and advanced mechanisms of the fighting game developed by Bandai Namco. This is a real godsend given the easy to learn, hard to master setting Harada and his team wanted to impose the title.

Easy to Learn, Hard to Master

While Pokkén Tournament is also accessible to the little ones or to those who are fasting in fighting games, those who approach the title with a more competitive attitude will find bread for their teeth, with multiple mechanics interfacing with each other, adding additional layers of complexity. The fights take place alternating panoramic phases, in which the two Pokémon are free to move around the arena and attack mainly with the help of bullets, and fight phases, more similar to a canonical fighting game. Specific attacks, such as grabs or throws, will trigger the phase change, complete with moving the camera. Each Pokémon's move park includes attacks, grapples, and counterattacks, with a triangular system that determines the priority of each shot: counterattacks win over simple attacks, holds interrupt counterattacks, simple attacks break holds. Added to this is the possibility of canceling the animations of some moves, creating ad hoc combos for each occasion. Pokémon can also assume a neutral position, a low position and a high position, with different attacks from time to time. It will therefore be very important to always keep in mind the move park of your Pokémon and what we are facing, the range of attacks and the priority system, but also factors such as size and shape of the arenas to emerge victorious from the toughest matches. Pokémon fans will be happy to discover that the various moves available to Pokémon are taken from the games of the main saga, with a small cameo intentionally inserted by Harada and associates: each fighter presents a typical move of one of the characters in the saga of Tekken, adapted for the occasion. During the fight two bars will fill: the support one, which will allow us to summon a support Pokémon for a few seconds, and the resonance one, which will allow us to enter Super Resonance mode (complete with Mega Evolution for those Pokémon that have them) and unleash devastating special attacks.

Hair and furs for everyone!

Compared to the Arcade version that was still a real work in progress, Pokkén Tournament on Wii U features a complete roster. It is about 16 Pokémon, 14 available immediately and 2 unlockable in story mode. It is also nice to see that not only Pokémon of the fighting type have been chosen, but an effort has been made to include Pokémon of the most disparate types. In some cases they are even non-bipedal Pokémon and therefore not comparable to the typical fighters of a fighting game. Each wrestler therefore has his own specific identity, reflecting the idea that Pokémon enthusiasts have made of various pocket monsters over the years. It is a bit of a shame from this point of view the presence of only 16 fighters, compared to a total number of Pokémon that exceeds 700. The development team, however, wanted to justify its choice putting playability and balance first, which would have been highly problematic with a large number of unconventional fighters. This attention to detail is also echoed by the technical realization. Harada & Co.'s purpose was to give one realistic representation of the various Pokémon, and this was done by implementing an innovative graphic render that allows a particular rendering of furs, scales and surfaces. The result is undoubtedly exceptional, giving us the best three-dimensional representation of a Pokémon ever. The downside is that to achieve this, compromises had to be made in the construction of the arenas, which appear empty and bare, almost devoid of details.


Comment Pokkén Tournament is presented on Wii U with a completeness and quality of content that only a few months ago seemed impossible to imagine. The attention to detail paid by the Bandai Namco team is striking in giving life to those Pokémon that we have known over many years of Game Freak titles and placing them in the context of a fighting game without distorting them. The approach to the gameplay is also very interesting, which presenting multiple layers of complexity makes it perfectly accessible to both the novice and the fighting fanatic. There are still some elements to be analyzed later in the review, but our first impression of Pokkén Tournament can only be strongly positive. Pros and cons ✓ Lots of content: character editor, story mode, very complete tutorial
✓ Easy to Learn, Hard to Master
✓ Graphically, the individual Pokémon make their figure
✓ Much respect for the original material x Empty and somewhat bare arenas
x A greater number of wrestlers would not have hurt anyway

Do you want to be a video game expert and know all the tricks, guides and reviews for your video games ? Holygamerz.com is a group of video game fanatics who want to inform you about the best tricks, guides and tips. We offer you the best information to be a reference in gaming, so here you can find guides, tricks, secrets and tips so you can enjoy your games to the fullest. Are you ready to get all the achievements of that game that you resist so much? Enter now and enjoy your favorite video game to the fullest!
Disney Infinity 3.0 Review ❯