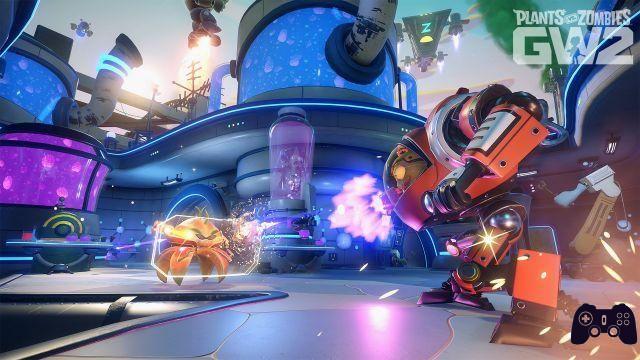 Developing a licensed spin-off, especially when the original brand has found much of its fortune on platforms philosophically quite distant from PC and console, is a delicate operation: it is easy to put your foot in the wrong and get the formula wrong and it is equally easy not to be able to interpret the spirit and the charisma of the original "matrix", with the risk of releasing a product that mimics it but does not catch it. PopCap Games two years ago she had succeeded in the enterprise with the excellent Plants vs Zombies: Garden Warfare, re-adapting the context of their Tower Defense into a fun third-person shooter, despite some content limitations. Will they be able to repeat themselves with Plants vs Zombies: Garden Warfare 2 or is it the classic more of the same?

PopCap has put much more care into the single-player experience, but still lacks a proper campaign

Compared to the first Garden Warfare, the first, big difference is noticed as soon as the title is started: instead of the menus of the first chapter you find yourself in front of an interactive hub (actually two, one for plants and the other dedicated to zombies) that allow the use of the contents present by interacting with the objects and characters positioned on the map. There is really everything, from the customization cabin that allows you to select the class to use to move (we will talk about it in detail shortly) and change the appearance and skills of your avatar, to a letterbox that allows you to import the progress obtained in the previous title of the series and get rewards based on the level reached in the first Garden Warfare, up to the inevitable portal that allows you to access the main course of the experience: multiplayer. Compared to two years ago, however, more attention has also been paid to the single-player experience: leaving one's base to go to the Cortile di Battaglia (the land area between the strongholds of the two sides) it is possible to come across some secrets, such as the chests to open using the "stars" collected, or even in different enemies that engage in battle on the spot, as well as being able to improvise a sort of horde mode if you hoist the flag placed in the center of the map. For both plants and zombies, however, the developers have introduced a series of secondary missions, playable at different difficulties, which allow you to become familiar with the classes present and at the same time raise some coins (to spend, as in the first chapter, at the distributor of cards to get characters, consumables or pieces for customization) and round off the experience obtained by playing online: the objectives range from having to search for characters or objects on the map to infiltrating enemy bases, even touching some challenges (this time in a real and own) to hordes in which a squad of four soldiers is commanded, being able to change the one in use in real time using the up arrow. In conclusion, the feeling that PopCap this year has tried to ennoble even the single experience, or at least to justify the need to always stay connected to use the contents (still being able to invite friends even while staying in the hub), however, failing to pack a single package that does not make you regret a real campaign mode.

Six new classes, three on each side

Garden Warfare 2 still gives its maximum when you decide to take the field online, especially thanks to the rich class system taken from the previous chapter (to which six new ones are added, three per faction) which allows you to unlock customizations and new characters for each through packs of stickers and new skills as you level up, as well as being able to import them from the first Garden Warfare. Unlocking new members for your army was then made less frustrating, thanks to the introduction of a package that guarantees the player to “undo” all the pieces necessary to create a new character.

Apart from this addition (and the aforementioned six new classes), in this respect Garden Warfare 2 slightly changes the offer compared to the previous chapter: the plants still find their infantry in the Peashooter, while the Masticazombie manages to make its way through the enemy ranks using brute force or moving underground to hit (and eat) the victim from behind while the Sunflower performs the tasks of the doctor and the Cactus acts as a sniper (equipped with a drone). The new entries are instead the Cedar, bounty hunter from the future able to attack with a laser beam, create a temporary mobile shield and transform into a sphere to move faster and the Grain of Corn, the floral world's answer to Rambo and featuring dual machine guns / popcorn shooters, plus the ability to literally rain corn on enemies and perform scenic Matrix-style somersaults (while continuing to shoot). The circle of “vegetable” novelties closes Rose, practically borrowed from a fantasy game and capable of hitting enemies with its magical thistles, summoning a blanket that blocks the special abilities of the enemies and turning them into goats to further limit their danger.

On the Zombie front the Soldier returns, once again the class suitable for the front rows, flanked by the Engineer (more heavily armed), the Scientist to take the place of the doctor and the Star Player, a tanker dressed as a quaterback with health plus a machine gun that shoots balls. These known faces alternate with the Imp, almost a quote / parody of Titanfall equipped with Jetpack, Mecha and a gravitational grenade that briefly lifts all enemies that fall within its action area (but which pays for this high mobility with a blocked health at 50 points, until you don't get on the edge of the Z-Mech and earn another 200), Captain Deadbeard, a pirate complete with a parrot capable of using explosive barrels, a devastating cannon (which prevents you from moving) and a fearsome weapon, very precise from a distance and lethal at short range, and finally the Super Zomb, halfway between Elvis and Superman's Bizarre and capable of hitting melee with kicks, punches and a rotation but also at long range with the Super Ultra Ball, a sort of Hadoken.

Lots of fun, but there are some imbalances

Pad in hand, once in battle, the fun is guaranteed in any case by virtue of a decidedly solid gunplay and a lot of variety on the plate: we cannot fail to point out, however, some balancing problems, especially if you look at the side of the Rose (not surprisingly, capable of monopolizing the attentions of the Plants faction), a a little too advantageous over the other classes and even more difficult to hit given the slimmer silhouette (especially compared to the Z-Mech, heavily armored and equipped with monstrous firepower but trivially much more exposed given its generous size).

There is no shortage of contents also on the modality front, which also stand out thanks to the excellent technical and netcode performance

Even on the PopCap mode front, it did not go to savings, in this case packaging a respectable offer by drawing on the work done with the first Garden Warfare and then proposing some evolution. The Welcome Mat is back, classic team deathmatch where, however, customizations and unlockables cannot be used, as are (obviously) classics such as team deathmatch, Elimination confirmed (to get the "point" for each kill you have to collect a sphere left by enemy), Gnomba (where you have to destroy the three enemy bases using gnomes equipped with bombs) and Tombs and Gardens, this time also playable as zombies, where until the final battle the plants defend and the other team attacks and then concludes the all with a minigame that varies depending on the map. In this sense, the developer did not skimp, creating very colorful and generous maps from the point of view of dimensions, which have the advantage of performing well from a technical point of view in practically all circumstances, without suffering slowdowns or drops in frame rates even in the heart of the action. We also promote the game netcode with flying colors, which as two years ago is more than up to the task and manages to offer a solid and practically problem-free experience, especially since it is coupled to an effective and timely matchmaking system. (for example, the average wait for a game on the Welcome Mat is quantifiable in a matter of seconds).

Verdict 8/10 If you have "zombied" the first, take the second Comment PopCap Games has done it again: after having avoided the trap of the "forced" spin-off has managed to pack, based on the excellent result achieved two years ago, a sequel that averted the danger "more of the same" by adding more single player content, some extra modes and six new classes that manage to guarantee the player a lot of fun, even if a little sin on the front of the balance. In any case, we cannot fail to praise the developer, who among other things in our opinion has also hit the perfect launch period: with no big news on the competitive shooter front (with the exception of Doom), Garden Warfare 2 has several months as a protagonist. potential, especially when you think of the free content already promised by Electronic Arts Pros and Cons ✓ Lots of online content
✓ Less frustrating character unlock
✓ More curated solo experience ... x ... But the campaign is still missing
x Some balance problems
Do you want to be a video game expert and know all the tricks, guides and reviews for your video games ? Holygamerz.com is a group of video game fanatics who want to inform you about the best tricks, guides and tips. We offer you the best information to be a reference in gaming, so here you can find guides, tricks, secrets and tips so you can enjoy your games to the fullest. Are you ready to get all the achievements of that game that you resist so much? Enter now and enjoy your favorite video game to the fullest!
Forza Motorsport 7 review ❯

Everhood Review: A Journey to Enlightenment

Add a comment from Plants vs. Zombies: Garden Warfare 2