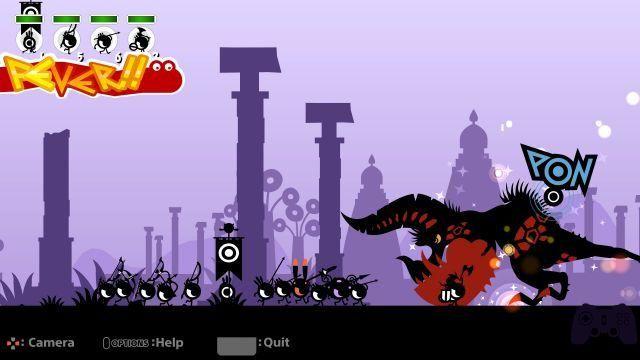 The framework is that of a strategic one, but it is practically lived in toto in time to rhythm - and not forgetting some (mild) God Game ambitions. The result? Patapon gets a makeover and goes in search of Fineterra on PS4.

PSP undeniably had courage. Yes, several of the most famous titles linked to the first portable spin-off of the PlayStation brand were taken from the living room ecosystem, trying to bring in mobility those Intellectual Properties that had conquered the public at home - be it titles made in Sony or products from third parties, such as the two Gran Theft Auto Stories. But not for this there was no lack of fresh air, not for this reason brands and titles designed for what was a new platform at the time were not born: almost a decade later - just the time of a couple of revolutions in the portable market - we are here to rediscover just one of these initiatives: Patapon. Two decades and forty inches later, let's see how the crossover between Pyramid and Japan Studio fits on PlayStation 4.

In compliance with the rule that says never to judge a book by its cover - or in our case, a video game by how it is presented - Patapon in the first place it keeps its true nature well hidden. Looking at the title, one would never say that behind that two-dimensional world, made up of simple and precise shapes and bright colors and told through a common thread on the threshold of the ridiculous and the caricatural, it hides a damn challenging product and capable of making you sweat the proverbial seven shirts to the player.


The story, roughly, is this: the people of the Patapons in ancient times were an absolute power, so much so that they entered the myth, but then over time their legacy disappeared and the conquerors became conquered. In search of their lost glory - and with the express purpose of reaching Fineterra and finally seeing "That Thing" - the Patapons invoke their patron deity (who is the player himself), who signs a contract and prepares to lead. its people through the dangers and vicissitudes that the game hides. And this is where the unexpected challenge begins. 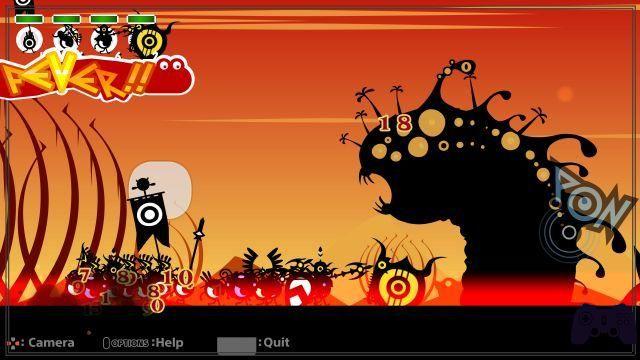 Patapon is not the best game to "disconnect" and relax, as it requires a certain commitment

While there are some components taken from the God Games so dear to Peter Molyneux, Patapon is essentially a bizarre cross between a strategy game and a Rhytm Game. The aim of the game is to lead, from mission to mission and from battle to battle, your own Patapon army, choosing in the preliminary phase the troops to be deployed and their armaments (paying attention to the type of mission, since each unit has its own characteristics and is more suitable for covering specific roles) and then, during the playful phases proper, giving them orders. Orders that though they are not given directly through some interface, but running - strictly in time - rhythmic combinations that correspond to the maneuvers you want to see performed. Whether it is attacking, defending, advancing or even using one of the Miracles available to the impersonated divinity - which basically activate status changes on the game map, making some attacks more or less effective and dispensing bonuses and penalties - everything, in Patapon, passes through the drums and their sound compositions. More: each series of ten consecutive orders executed in time (losing a step causes the counter to reset, as well as wasting precious time and leaving the Patapons unmanned) activates the Fever mode, which in addition to acting as a starting point to be able to activate the aforementioned miracles cause some micro-changes in the reactions to the player's orders of the Patapons, who attack more ruthlessly, defend better or gain access to some other bonus. In short, the rhythmic component is as important as the strategic one - also because the latter is mostly enjoyed through the drums, on the battlefield. It is precisely for this reason that Patapon, especially in the more advanced stages of the game, appears an unexpectedly demanding title: not only do you pay for every error (more or less expensive, depending on the type of mission), but you must also be careful about enemy moves and consider that between the moment in which the player decides to issue a command and its actual execution on screen there is half of time, necessary to perform the correct rhythm but also for the Patapons to perform the action. An aspect of crucial importance in particular during boss fights, where the army challenges creatures that are larger and more threatening than normal enemy troops, and consequently you play trying to predict and anticipate the opponent's moves. Also because in several of these cases losing a soldier it doesn't just affect battle only (basically, just picking up the "hat" he leaves behind to be able to bring it back to life at the end of the level), but it becomes a permanent condition, forcing the player to spend in-game money and resources to create a new replacement unit. 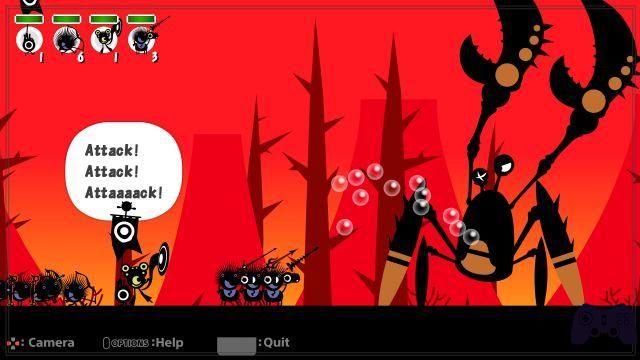 The most serious flaw? The grinding

One of the major flaws of the production is right here: not because of the difficulty of the challenge per se, but because this stylistic choice actually leads the player to have to resort in extreme cases to some level grinding to accumulate the resources necessary to restore (and strengthen) your army. Later in the game there is the possibility, through some mini-games (always on a rhythmic basis), to fill part of this need, but a certain tendency to backtracking and the repetition of levels already addressed remains. The developers have tried to compensate for this by introducing some additional difficulty levels for certain missions - in particular the boss fights - but, especially if you consider the risk in some cases of losing further units by re-dealing with these, it is not enough to completely erase this stain. .

From the point of view of adaptation, however, the only drawback concerns the usual somewhat listless operation involving game cutscenes, excluded from the remastering work that permeates the rest of the product and quite in trouble, if compared to the rest. Not a striking business card, since the first few minutes in the company of Patapon are also spent watching the introductory film. For the rest, however, undoubtedly the developers they worked well, certainly helped by the artistic direction of the original product - which undoubtedly lends itself well to a restoration work of this type - and by the affinity in terms of controls between PSP and PS4. Without the need to invent something for the porting of touch controls (which the first Sony laptop did not have) the experience is in fact replicated 1: 1 compared to the original, and given that from the point of view of the interface the elements on the screen are relatively few (especially the rhythm of the drums) it was inevitable to be able to bring home the result without too many worries.

Verdict 8/10 The fifth drum is that of swearing Comment Patapon is an undoubtedly particular experience, which mixes two genres that usually have very little in common with the final result of creating an atypical product, which can be a pleasant novelty on the theme - of strategic or rhythmic experiences, you choose a bit - but also of keeping someone at a distance. Also because as mentioned this is not the classic title with which to "disconnect" and play an hour in total relaxation: Patapon requires a certain commitment, and those who decide to invest in the title are rewarded in satisfaction by the game mechanics. But precisely, he must decide to invest something of his own in it. Pros and cons ✓ A sui generis title
✓ Challenging and rewarding
✓ Good remaster ... x ... Separate cutscene
x High risk of grinding