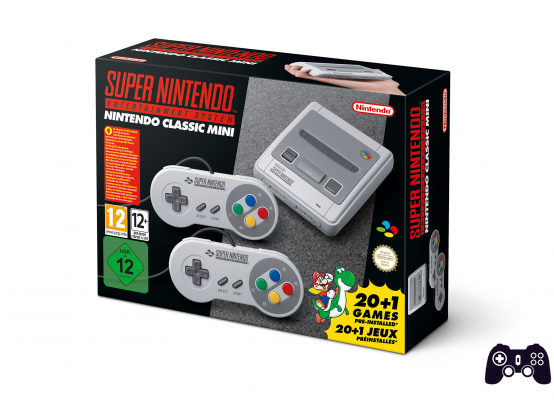 Nintendo announced, in a press release, the arrival of the mini  Super Nintendo Entertainent System (abbreviated to SNES) next 29 Settembre. More details in the press release below.

Nintendo Classic Mini: Super Nintendo Entertainment System includes 21 classic games, can be connected to any high-definition TV using the included HDMI cable, and will be available for a limited time. For the first time, players who purchase the console will be able to enjoy the intergalactic adventures of Star Fox 2, the sequel to the original Star Fox (initially titled Starwing on its debut in Europe) which was created during the Super era. Nintendo but that hasn't been released yet… nowhere!

The Nintendo Classic Mini: Super Nintendo Entertainment System looks the same as the original console - it's just smaller - and has 21 pre-installed games:

All of these games will be considered classic by anyone, and some of them in particular - Secret of Mana, Final Fantasy III, EarthBound and Super Mario RPG: Legend of the Seven Stars - are remarkable role plays and can take ten hours to complete them. Even for super fans who have played these games many times, the arrival of the star Fox 2 will offer them something completely new to play with. (Star Fox 2 must be unlocked by completing the first level of the original Star Fox).

They are included* in the Nintendo Classic Mini: Super Nintendo Entertainment System: an HDMI cable, a USB power cable and 2 wired Super NES Classic Controllers - ideal for gamers who can immediately dive into multiplayer action. Some of the games with multiplayer modes include Street Fighter II Turbo Hyper Fighting, Super Mario Kart, Contra III The Alien Wars and Secret of Mana.

Step back into the 29s and rediscover some timeless classics with the European launch of Nintendo Classic Mini: Super Nintendo Entertainment System on September XNUMXth.

* Note: To play, a power supply block for the USB cable is required, not included in the package.

Do you want to be a video game expert and know all the tricks, guides and reviews for your video games ? Holygamerz.com is a group of video game fanatics who want to inform you about the best tricks, guides and tips. We offer you the best information to be a reference in gaming, so here you can find guides, tricks, secrets and tips so you can enjoy your games to the fullest. Are you ready to get all the achievements of that game that you resist so much? Enter now and enjoy your favorite video game to the fullest!
Rhythm Thief and the Emperor's Treasure Review ❯

You can also pre-order Super Smash Bros. ™ Ultimate - Limited Edition, which includes the game and a special Nintendo GameCube controller and adapter

News Telltale has news on The Walking Dead ending

News Retro Studios collaborates with the composer of Deus Ex

News + Quadruple A, the video game I would like to play

Add a comment from News Nintendo announces the mini SNES