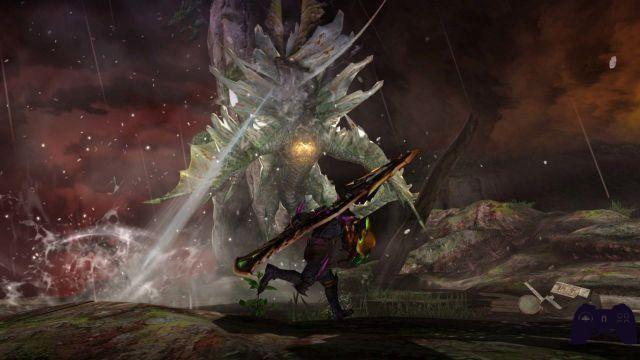 The player, in the role of a brave hunter, will embark on an adrenaline-fueled adventure where he will face huge and dangerous monsters. During the adventure, the hunter will also have to defend the 4 main villages from serious threats, including a new and very dangerous Ancient Dragon. The title features a combination of various features, combining the classic gameplay of the series with new mechanics, new explorable areas and new monsters, including two fan favorites: the lightning-fast Zinogre and the stealthy long-tailed Nargacuga. The game also boasts the most complete roster of monsters in the entire series.

This chapter also introduces a new level of missions, called "G" rank, featuring enhanced and even more formidable versions of the classic monsters fans are used to, thus testing the tactics of the most experienced hunters with different attack patterns and skills never seen before!

Newcomers to the series need not worry as the game offers a variety of powerful special moves, called Hunting Arts, which can be performed with a simple touch of the Touch Screen. Users will be able to experiment and choose from 6 different Hunting Styles, including two new styles: the Courage Style, which rewards players with new moves, allowing them to chain multiple attacks in a row, and the Alchemy Style, a support style that allows them to create various items useful during a fight. Hunters are therefore encouraged to explore and customize their experience from mission to mission, with the aim of finding the style of play that suits them best.

Do you want to be a video game expert and know all the tricks, guides and reviews for your video games ? Holygamerz.com is a group of video game fanatics who want to inform you about the best tricks, guides and tips. We offer you the best information to be a reference in gaming, so here you can find guides, tricks, secrets and tips so you can enjoy your games to the fullest. Are you ready to get all the achievements of that game that you resist so much? Enter now and enjoy your favorite video game to the fullest!
Special Meta Game and Power Gaming? Fuck them! ❯

News Cyberdimension Neptunia: will arrive in the west for PS4 and PC this winter