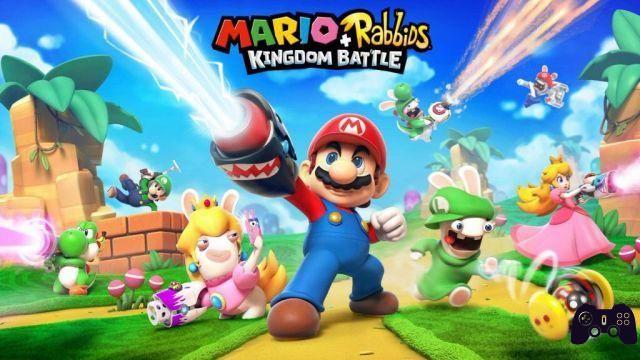 Over the years the Mario world crossovers have been wasted with other famous brands, from Nintendo and not, such as the series dedicated to the Olympics together with Sonic or the "recent" Puzzle & Dragons: Super Mario Edition. Shortly before the presentation of the Switch, some rumors appeared on the web about a possible game with the crazy Rabbids, a spin-off of Rayman, which sparked big debates among gamers. Officially presented at the last E3 Mario + Rabbids: Kingdom Battle immediately rose in the rankings of approval, thanks to the trailer that showed his skills and, thanks to the presence of the division of Ubisoft at the helm of the project. Invited by Nintendo - whom we still want to thank - we had the opportunity to put our hands on a demo of the title, due out on August 29th. Discover with us, Mario + Rabbids: Kingdom Battle.

The preface of this crossover is the most classic: the Rabbids have fallen out of a dimensional hole and invaded the mushroom kingdom. Unfortunately, however, most of those arrived prefer to create trouble and it will be up to Mario and his associates - together with Rabbid who have decided to copy them in all respects - to save, once again, their home.

In twenty minutes, the demo hinted at the atmosphere of the game

The demo we tested concerned a short path that will not be included in the full game but that in the twenty minutes at our disposal has made it clear what the atmosphere of the game will be. In fact, the "friends" rabbits will follow in all respects Mario and his companions, sometimes almost making fun of them: the symbol of this aspect is certainly Rabbid-Peach who does not waste moments to pull out his mobile phone and take selfies, even in dangerous or serious situations like the fight with a boss can be. During the walks in the kingdom of mushrooms it is possible to find, among other things, curiosities that can make the gamer smile such as the presence of Rabbid sitting on giant toilets or the thousand signs near a combat area that underline their danger.

The path we tried made available to us a part of the activities that we will be able to carry out in the full game. For example, one of the tasks that was illustrated to us saw our protagonists having to cross a path full of walls that rose as we passed, all by collecting two types of coins: gold - usable in battle hq to buy weapons - and some reds that, as in the classic Mario series titles, guaranteed a bonus (in this case the ability to purchase a particular type of weapon) once the collection was finished. This is just one of the methods by which we will be able to spend our time between one battle and another, the real highlight as we were shown both during the rehearsal and in the presentations that ended after E3.

Kingdom Battle is not part of those RPG-derived titles

To tell the truth, the title of this paragraph can be a bit misleading. Mario + Rabbids: Kingdom Battle is not part of those titles derived from role-playing games, such as the Mario and Luigi series, but is more attributable to a turn-based strategy, such as Fire Emblem or - better comparison - X-Com. Each turn is divided into two parts: in one it will be our "heroes" to move and make their moves while in the other, of course, it will be up to the enemies to try to decimate us. During each phase of the game we will have about 5 moves available: movement, ranged attack (which concludes the possibility of offense by the designated character), melee, special move and jump. So a character will be able, in the same phase, to chain them as he wants to achieve his own goal, be it the defeat of the enemy or the removal from a thorny situation. These actions are expandable through the skill tree, not available during our test but shown to us during the segments at the Treehouse, allowing us to hurt the opponent even, for example, by jumping on it. In the enemy phases we can - contrary to what was initially seen on Code Name STEAM - speed up the actions, this reduces downtime even if, at times, you may be sorry not to see how carefully the team of Ubisoft Milan customized most of the animations.

The test showed us the goodness of the system
combat

During our test the clashes were few but they allowed us to touch the goodness of the combat system, which will surely have some changes / additions in the final version. For example, during our second encounter with the enemy Rabbids we had two alternatives to beat the stage: a frontal attack forcing them to take cover in front of explosive crates to be, of course, detonated by inflicting enormous damage or using one of our heroes as bait while the others used the pipes, placed on the sides of the arena, to attack them from behind. Not in all stages, however, the victory conditions will be the same; in fact in the last fight before the end of the demo our goal was to get to a certain area - located near the exit - with at least one of our allies while the enemy (and a terrible Chomp attacking anyone who passed by) was looking to stop us.


Comment Mario + Rabbids: Kingdom Battle is one of the titles that most impressed us since its presentation. The Ubisoft Milan team managed to create a game capable of bringing together two worlds - that of Mario and that of the Rabbids - without making it strange or forced, all helped by an ironic and not at all serious atmosphere that made the winds fly. minutes of our test. The only doubt we have left concerns the combat system, unfortunately limited during the demo, to be verified in the review. Pros and cons ✓ Two worlds united perfectly
✓ Interesting combat system ... x ... but to be checked at the exit

Do you want to be a video game expert and know all the tricks, guides and reviews for your video games ? Holygamerz.com is a group of video game fanatics who want to inform you about the best tricks, guides and tips. We offer you the best information to be a reference in gaming, so here you can find guides, tricks, secrets and tips so you can enjoy your games to the fullest. Are you ready to get all the achievements of that game that you resist so much? Enter now and enjoy your favorite video game to the fullest!
Pikmin 3 review ❯