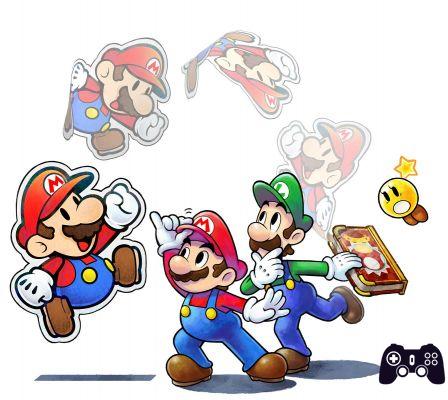 It is known that the Mushroom Kingdom thrives on spin-offs, which follow one another between one main chapter and another, enriching a whole series of micro-universes that each focus on a different genre or on a character from the world of most famous plumber from Nintendo. This 2015 started with Captain Toad, continuing through the woolen valleys of Yoshi, the almost perfect editor of Super Mario Maker, and the tennis courts of Ultra Smash and will end on December 4th with Mario & Luigi: Paper Jam Bros., fifth chapter of the Mario & Luigi series (sixth if we count as the progenitor also Super Mario RPG) and return on the screens of 3DS also of Paper Mario (after the very pleasant Sticker Star, born in 2012) and mix of brands brought to success by Alpha Dream e Intelligent System. After the road test this July, the time has finally come to decree a judgment on this particular role-playing crossover.

Hands off the Paper Book

After being the main protagonist of Dream Team Bros., Luigi is again the trigger of events also in Paper Jam Bros. The brother in green is in fact in the attic of Peach's Castle with a Toad, intent on finding the cause of the numerous drafts that have been annoying in recent days to the Princess. It will drop a strange book which, when opened, will release all the paper characters from the Paper Mario series into the Mushroom Kingdom. Among these, of course, also Bowser di Carta and his henchmen, the sweet Peach of Carta and, as expected, also Mario di Carta. When the two Bowsers ally and kidnap the two Peaches for the umpteenth time, the three heroes will have to join forces and go in pursuit, facing the round and paper armies, with the very solid gameplay that gives Super Star Saga accompanies the series.
During the adventure there is no shortage of distinctive features of both series: between jokes about the world of Carta, irony about the brand of the plumber in red in general (Peach who complains about the continuous kidnappings) and references to the old chapters of the series, the plot of Paper Jam Bros. It will conquer fans of both brands, thanks to a fast pace and an escalation of events in rapid succession.

The exploration of the Mushroom Kingdom is aided by the special Trio actions that replace the normal Brothers Actions of the past two chapters, and which are very similar to those in collaboration with the Baby versions seen in Brothers in Time. By selecting the relative icon via backbones or on the Touch Screen, and pressing in sequence ABY (Mario-Luigi-Mario di Carta) you will have a very powerful attack with the Hammer that will allow you to overturn cardboard objects or to break blocks, a tower of heroes able to stretch horizontally to grab distant tools, a drill to collect stat beans (as has always been the case in the series) and more, making the Mushroom Kingdom more and more explorable as you progress through the storyline.

The Shift Plumber but not only

Obviously, even during the turn-based battles you will have all three characters available, each entrusted as always to its own key. For those unfamiliar with the two series, both the Intelligent system and Alpha Dream titles offer turn-based gameplay based completely on the coordination and rhythm of the attacks: by pressing the button at the right time you have the opportunity to do more damage and get a Fantastic, and every shot of the mustachioed brothers (and appears of Carta) will have to be done in the right moment. Great importance also for the defense, also entrusted to the timing of the player, who can avoid the attack both with jumps and with the hammer (depending on the enemy) and

if he succeeds in the action to counterattack and damage the opponent. There is no need to emphasize how vital it is, especially against the bosses (once again the highest point of the title), to be able to launch a fair counterattack, especially given the high number of life points of Bowser's generals. As in previous Mario & Luigi titles, Paper Jam Bros. also gives its best in combat, with a gameplay with solid mechanics that confirms both the brother attacks (special tools that see Mario and Luigi collaborate to bring about a large number of damage to opponents) and the effectiveness of Trio Attacks, techniques that can be performed by the three protagonists that transform opponents into pieces of paper and damage them in various ways (tennis, tornadoes, kites) all with the inevitable synchrony in pressing the buttons.

Over the years, Mario & Luigi has always offered an excellent mix between Platform and RPG, with Paper Jam Bros. Alpha Dream takes it one step further, throwing other genres into the cauldron thanks to the Missions of the Paper Toads, special secondary quests in which the three heroes will have to save the anthropomorphic mushrooms in stealth phases, running or even in puzzle mazes and multiple choice quizzes. If at first glance these missions may seem fun, towards the second half of the game they will begin to weigh and break the high pace of the plot we mentioned earlier. Having to save a certain number of mushrooms in order to gain access to a new area undermines the pace, but is probably the only wrinkle in solid and ultimately successful gameplay. As in previous chapters, there is an arcade in which to re-face the challenges and battles in difficult mode, while in the Lakitu information center you can also repeat the Toad missions, to obtain new battle cards (which we will talk about very soon).

The amiibo ace up your sleeve

In addition to the equipment, the beans already mentioned for the statistics, and the leveling of the characters, also present in the other chapters of the series, in Paper Jam Bros. we find the encounter cards, real substitutes for Sticker Star stickers and Dream Team Bros. pins. Each Clash Card has a cost in star points (obtainable as in the predecessor by scoring attacks or receiving damage) and you can have a maximum of ten choices at any time on the world map, including those purchased or received by enemies. Each turn, one of the cards will be placed on the touch screen, and it will be up to the player to decide whether to use it or not. As you can guess, each card has a different effect: they range from defensive ones and dedicated to statistics, to those that allow you to get more experience points and coins, passing through special cards to lower the level of the boss, or to turn opponents into mushrooms. . In addition to the cards present in the game, Paper Jam Bros. supports the amiibo of the Super Mario series (and related variants) allowing you to unlock special decks related to the figurine that can be used once per battle at no cost. 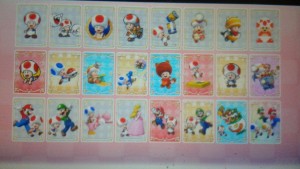 Toadette likes it big and made of cardboard

We had already talked about the last great (in every sense) novelty of Paper Jam Bros. in the preview phase: the huge Papercraft, renamed in the Modelloni version. These are real reproductions of the heroes of the series in cardboard and replace the giant battles of the dreams of Luigi from Dream Team Bros. Each time on board a different character, our three heroes will have to defeat the Modelloni by pushing and jumping. of Bowser's army, reducing their life points in huge game arenas. To charge your shots, special charging bases are available where, with a synchrony-based musical minigame, you can fill the appropriate gauge and prepare for battle. Unfortunately as happened for the giant battles, too the struggles of the Modelloni are few, and become a mere filler that separates one area of ​​the Mushroom Kingdom from the other.

As with its predecessors, Alpha Dream does not miss a beat under the technical and stylistic profile of Paper Jam Bros. Although the game engine is the same as Dream Team Bros., the title flows smoothly and manages to mix both the paper characters very well. , than the round ones, offering one of the best 2.5D of the current generation. I also applaud the music of Yoko Shimomura, capable of accompanying the whole adventure without ever getting tired and offering some really good new teams.
For owners of New 3DS and New 3DS there are additional benefits, in addition to the ability to use amiibo directly on the touch screen, they will also be able to activate a quick menu for healing tools via ZR and ZL, and explore the map on the touch screen with the c-stick.

Verdict 9/10 Paper, Hammer and Mustache and you go to crush Bowser Comment Mario & Luigi: Paper Jam Bros. is an excellent combination of the two creations of Alpha dream and Intelligent System. Developed for fans of both series, it allows those unfamiliar with one (or both) to get a precise idea of ​​the brands. The excellent and well-established timing-based gameplay is the flagship of a technical sector that never stumbles (except during a Trio attack), and which wins with flying colors one of the places among the best portable titles of 2015 , and why not, also of 3DS. The only flaw is in the Toad sub-missions, the only real wrinkle in the Alpha Dream poster. Noteworthy is the use of amiibo (although linked to the Super Mario Collection) which makes the figurines an integral part of the game and no longer a mere ornament. Pros and cons ✓ Excellent audio / video compartment
✓ Solid gameplay
✓ Superlative Boss Battles
✓ Great mix of genres
✓ Best use of amiibo so far x Toad missions boring in the long run
x Too few Modelloni
Do you want to be a video game expert and know all the tricks, guides and reviews for your video games ? Holygamerz.com is a group of video game fanatics who want to inform you about the best tricks, guides and tips. We offer you the best information to be a reference in gaming, so here you can find guides, tricks, secrets and tips so you can enjoy your games to the fullest. Are you ready to get all the achievements of that game that you resist so much? Enter now and enjoy your favorite video game to the fullest!
Dark Souls II review ❯