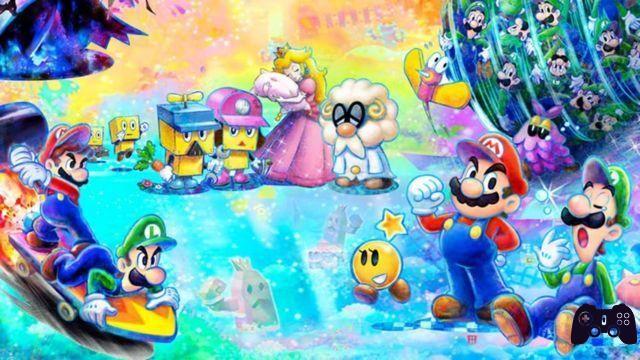 2013 will be remembered in the annals as theLuigi's year: after Luigi's Mansion 2, and New Super Luigi U, today July 12 will be available in all stores and on the eShop of 3DS a third title featuring Mario's green-dressed brother.
As we have already told you in the preview of last April, Mario & Luigi: Dream Team Bros. marks the debut on 3DS of the mechanics spin-off RPG starring the two plumbers.
In this fourth chapter of the brand, we find the introduction of several new gameplay mechanics and obviously the implementation of the unique features of the new Nintendo laptop, but not only: other great surprises await fans of the series also from a narrative point of view and stylistic.

The dream adventures of Mario and Luigi

While the merry gang of the Mushroom Kingdom is on vacation on the Pillow Island, Luigi has the brilliant idea of ​​falling asleep on an ancient find in the shape of a pillow, opening a strange portal into which the hapless Peach will be sucked into.
Mario, of course, will immediately set off in pursuit, leaving his brother asleep in the real world: inside Luigi's dream, the red plumber meets Prince Sognoberto, an anthropomorphic pillow that turns out to be the find we were talking about above.
To save Peach and free the other petrified cheeks (the prince's subjects), Mario will leave for a journey between two worlds, accompanied in both by his brother, but we assure you that this will be only the beginning of a great new adventure.
Between old and new acquaintances, also fished out from old chapters, the plot of this episode is even slightly more mature, treating in depth the relationship between the two brothers, and finally giving even more introspection to these now legendary characters and especially to Luigi, who like it or not, will be the key point of the game.
The main story remains the backbone, together with the gameplay, of the series and will not disappoint even in this fourth chapter: although Dream Theme Bros. does not present very big twists, it is always a pleasure to break the "silence" of the main series titles with these "spoken" spin-offs.
The high content of dialogues could surprise newcomers to the brand that Mario expects only jumps and somersaults, but certainly will not leave you disoriented for long once you enter the perspective of the turn-based role-playing game and the complete detachment from the platform series of the mustachioed plumber.

In this fourth chapter, the exploratory gameplay with classic isometric view of the series (with a 2.5-dimensional effect which we will discuss below), comes to life only in the real world, where as usual we will move our heroes in unison allowing them various actions through the key assigned to them.
Mario will make his moves by pressing A, while Luigi by pressing B, the two will have, as usual, different options, available to continue in the game and selectable via R, including the inevitable hammers and the screwed jump.
Unfortunately, even in Dream Team Bros. The subquests are limited to the numerous collectibles (Guancialini, Photos, Moves and Beans) and to a series of exchanges of objects with various characters, a serious gap for any self-respecting role-playing game and that not even this one. time has been filled.
But the real surprise will come when we enter the Dream world: here the gameplay becomes completely platform, moving the camera and framing everything in two dimensions without apparent depth.
In Luigi's dreams we will also have the special Magiluigi Mechanisms, which will allow the plumber in green to help his brother through special powers, such as changing the weather, or creating a huge column of Luigi to be able to reach distant platforms.
Each Magiluigi mechanism will be activated via the Touch Screen, where we will find our green hero blissfully asleep and, using Dorastella (the small yellow ball that began in the third chapter of the series nd Guido) we will be able to interact with mustache, nose, hands and so on. , to activate the corresponding effects in the dream world.

Even in the combat phases, our heroes will be assigned to a button and, as in any turn-based RPG, they will be able to choose different actions with which to fight the enemy monsters.
As in the Paper Mario series, also in Mario & Luigi the most important thing is timing: by pressing the button at the exact moment, we will get a Fantastico, and obviously we will do more damage to the enemy; in the same way, by pressing at the right moment we will be able to dodge enemy attacks and counterattack them. Each enemy obviously has a unique way of attacking, and the player will have to think about what to do from time to time to maximize their attacks and not suffer the opponent's ones..
By collecting special attack tiles scattered around the Pillow Island, we will unlock the Brother Attacks, special moves that consume the AP (attack points) of our heroes, and take advantage of the player's timing (for example, you must press A and B in time to kick a shell at the enemy) and, for the first time, the technical features of the console such as the Gyroscope (by tilting the console left and right we will guide a special helicopter that will drop our heroes on the target). All attack and defense mechanics are explained in detailed and nagging tutorials, so there is no risk of misunderstanding.
As in every chapter of the series, the difficult parts of the game, but also the funniest, remain the battles with the bosses, real interminable sessions of struggle, where the strategy will truly be the mistress of the field.
In the dream world, on the other hand, the music is slightly different, in fact we will have only Mario available, whose statistics will be enhanced by Oniriluigi, and with each attack of our mustachioed hero, a blow of the dreamlike Luigi will follow (for example by jumping on the enemy and pressing A in the right moment, a rain of Luigi will fall on the poor unfortunate to increase the damage).
Even in the dream world, the attack pieces are scattered which, once found, will allow our hero in red to summon (always at the cost of AP) an army of Luigi that will take on different forms, such as a giant hammer or a huge ball. always move thanks to the gyroscope.
In addition to the normal bosses, in the dream world we will find ourselves faced with Titanic Battles, real entertainment of Dream Team Bros.: action challenges between the giant monster on duty and a huge and lethal Luigi. In these phases, by turning the console vertically (a bit like it happened in Bowser's Journey to the Center), we will have the control of our hero via stylus and touch screen.
As in traditional battles, we will have to be careful to dodge and counterattack at the right moment, following the instructions on the screen.
In both worlds, in case of defeat, Dream Team Bros. offers, as an alternative to the classic "try again", an easy mode, which allows you to face the fight without too much difficulty, slowing down the movements during attacks to perform them better and weakening the opponent.
Thanks to these new mechanics, and to these exclusive moves that make excellent use of the 3DS gyroscope, the gameplay of Dream Team Bros. is the best of the series, renewing and evolving the one seen in the two chapters for DS, and ensuring great satisfaction to the fans of the brand.

It is not a dream!

Moving on to the technical side, the passage from 2D to 2.5 D that will envelop all the adventures in the real world of Mario and Luigi, to return to the classic style of the first three chapters when the red plumber enters his brother's dreams, is to be rewarded.
The models are treated in detail and the animations of the two protagonists, and many of the main characters, are treated maniacally as in previous episodes.
The 3D effect is unfortunately used sporadically, and for most of the time it is only a waste of battery. However, it must be said that the flying castle and many filmed parts perform at their best with the main 3DS feature active.
Many special techniques, both of our heroes and bosses, also use 3D, but they will be more of an obstacle to obtaining "Fantastico" and performing counterattacks than entertainment.
Unfortunately, excluding Sognoberto and the other main non-player characters, many character designs of the inhabitants of the island are ugly and uninspired, unlike the previous chapters of the saga, where every character, however secondary, was neat and captivating.
From the sound point of view nothing to say, too bad for the few new themes that join the main tracks of the previous chapters, rearranged for the debut on 3DS. This is followed by the "dubbing" of Mario and Luigi, who will mumble nonsense words in addition to their more classic screams; all as usual translated up to the last word in Spanish in the text on the screen.

Dream Team Bros. Amazes and fascinates with the small additions and the slight graphic renewal, giving over thirty hours of gameplay only for the main story, to which are added many secondary modes such as the challenge to the Bosses and the necessary backtracking for the collectibles. In conclusion, Dream Team Bros. is an ideal role-playing game to take under an umbrella.

Verdict 9/10 Do I dream or am I awake? No, I'm Luigi. Comment Mario & Luigi: Dream Team Bros. turns out to be an excellent debut on 3DS, renewing all the best parts of its predecessors and giving new life to the gameplay of the brand. Those who do not love the Mushroom Kingdom and its inhabitants will hardly like it but, like Paper Mario, it remains a title to try at any cost for all lovers of role-playing games. Thanks to the increasing difficulty and the entertainment provided by the simple story, Dream Team Bros. cannot be missing in your videogame libraries, and it easily stands alongside all the valid titles released so far in 2013 on 3DS. Pros and cons ✓ Excellent animations
✓ Revamped gameplay x 3D effect used little
x The Character Design of the inhabitants of the island is uninspired
Do you want to be a video game expert and know all the tricks, guides and reviews for your video games ? Holygamerz.com is a group of video game fanatics who want to inform you about the best tricks, guides and tips. We offer you the best information to be a reference in gaming, so here you can find guides, tricks, secrets and tips so you can enjoy your games to the fullest. Are you ready to get all the achievements of that game that you resist so much? Enter now and enjoy your favorite video game to the fullest!
News Star Citizen: $ 27 bundle revealed ❯