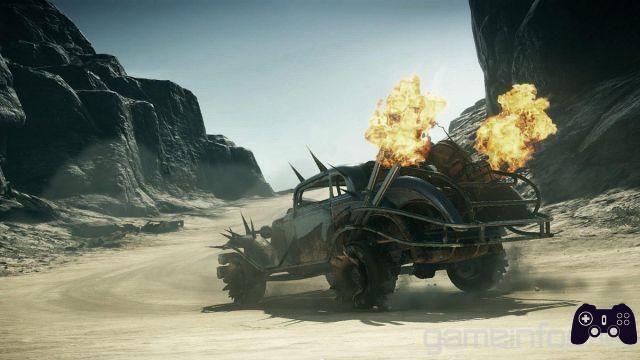 Avalanche Studios in recent years it has made itself known above all for the work behind the Just Cause series, which especially with the second episode has managed to tie together a certain propensity for the open world to violence, explosions and environmental destructiveness. Precisely for these reasons to see the Swedish firm working on an Intellectual Property like that of Mad Max (recently returned to the limelight in cinemas with Fury Road) can only arouse at least some suggestions. To find out if these will then materialize into a title of thickness or not, we will have to wait for the release of the title and the final review: for now you will have to settle for a first judgment based on hot impressions after the road test at Gamescom 2015, at the kind invitation of Warner Bros (who is the publisher of the title in question).

It may not be the Max seen in the cinema, but the world is undoubtedly that of Mad Max

It should be immediately stated, as made clear by the developers, that the Max of the game and the Max (or rather, the Max) of the cinema are different characters: the common thread between the big and the small screen is therefore the game world, that manages to make the whole atmosphere over the top and post apocalyptic of George Miller's creature, thanks also and above all to a really large and well-structured map. To support the protagonist in the exploration (as mentioned, the approach chosen by Avalanche is that of an open world that delivers the keys of the experience directly into the hands of the player) in these deserted lands populated by crazy people there will be his mechanic confidence, that in addition to carrying out his task in the most classic sense (repairing the Magnum Opus, the car available to Max for this experience, as well as upgrading it with the parts collected around) will assist the player by firing with heavy artillery .

But the Magnum Opus is not the only weapon (because given the possibility of using it to massacre enemies and install spikes and other blunt objects it is a weapon) in the hands of Max: when it is deemed necessary, you want to ensure that the vehicle is irremediably damaged or simply for the sake of leading hands, it is possible to approach the various enemies in a more direct way, with a battle system along the lines of the one cleared by Rocksteady with the Batman Arkham series (where the lion's share will be the ultra -violence) or using the different firearms available, which benefit from a solid gunplay but perhaps a little too inflated by the so-called "Bullet Time", which during the aiming phase triggers a sort of slow motion with the effect of make life a little easier for the player. Apart from this flaw, Mad Max seemed damn funny to us, however, managing to combine this fun with the right level of difficulty and commitment required., thanks to a decidedly "sgamata" enemy AI and up to the occasion. Even visually, we did not seem to grasp particular smudges, given the stable frame rate and a non-negligible image cleaning, to counterbalance the care reserved for the scenario and polygonal models (as well as the animations of the various characters).


Comment Mad Max has all the credentials to be one of the best cinematic tie-ins ever to hit the gaming shelves: the title manages to entertain both on foot and aboard the car, thanks to a battle system and a refined gunplay ( with the only drawback of the "bullet time" perhaps too present), with all that will probably be able to keep the player company until the end thanks to the excellent enemy AI. Pros and cons ✓ Atmosphere in full force
✓ Good compromise between fun and difficulty x Bullet time perhaps too present
x Some problems with the navigation system

Do you want to be a video game expert and know all the tricks, guides and reviews for your video games ? Holygamerz.com is a group of video game fanatics who want to inform you about the best tricks, guides and tips. We offer you the best information to be a reference in gaming, so here you can find guides, tricks, secrets and tips so you can enjoy your games to the fullest. Are you ready to get all the achievements of that game that you resist so much? Enter now and enjoy your favorite video game to the fullest!
Nintendo Direct special: when even the "mini" ads are a bomb ❯