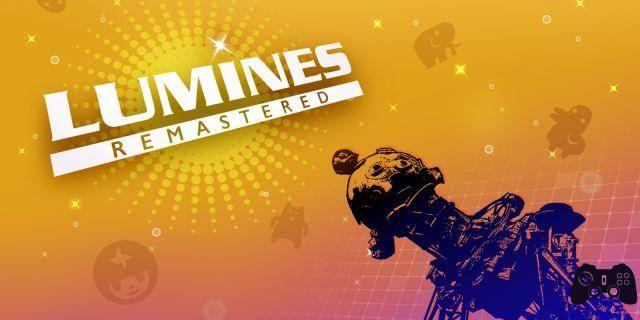 13 years ago it debuted on PSP a puzzle game destined to become such an icon. Today, Lumines returns in a remastered edition for consoles, to introduce new generations to the full power of the creative flair of Tetsuya Mizuguchi. Released last June 26th, Lumines Remastered is available in various digital stores at a very attractive price: € 14,99.

Turn up the volume to a "ball", put on your headphones and enter the world of Lumines.

World of Silence, creepin 'sightlessness time. Port of sadness, sleepin 'flightless mind. World of silence, blinkin 'farthest light. Rard of brightness I will get there and shinin '.

A vocal line distorted by the vocoder, a pounding beat that penetrates the eardrums, straight to the brain. And a guitar that captures in an almost maniacal loop, it sounds like a pleasant hum. Thus it opened Lumines: Puzzle Fusion, possibly one of the most iconic and beloved PSP titles ever. A puzzle game born from the visionary mind of Tetsuya Mizuguchi, who after giving life to timeless masterpieces such as Rez e Space Channel 5, he saw in the laptop Sony the perfect tool for his new work.

Anyone who knows Mizuguchi knows of his carnal love for music. A love that goes far beyond mere accessory use, but as an integral part of a gameplay that cannot live without. All thanks to continuous research and experimentation in the field of synaesthesia, which has always been the leitmotif of his games. Titles that have more the flavor of an artistic installation and that elevate his videogames from the simple concept of "little game", but overwhelmingly lead to the world of art.

Among Mizuguchi's productions, Lumines is perhaps the most concrete. The one with the feet firmly anchored to the ground and more open to the general public. The fact of operating in the field of puzzle games also makes it easily digestible. You start the game, press start and you are overwhelmed by the music, by the flashes of the background animations, by the blinding colors of the blocks that fall at full speed and saturate the screen with the risk of ending up in game over.

And let's not exaggerate if we say that Lumines can be considered the Tetris of the new millennium.

With Lumines, Mizuguchi reinvents the concept of the puzzle game taking as a basis that of Tetris and Puyo Puyo. And it does so with a disarming simplicity and an almost unnatural and hypnotic freshness.

Not surprisingly, Mizuguchi himself is working on a modern reimagining of Tetris, developed to exploit the potential of virtual reality above all.

Synesthesia, take me away

On the screen the player will find himself in front of a grid, nwhich will fall from the top of the 2 × 2 blocks. Forming a square made up of 4 boxes of the same color, as the timeline (which represents the beat of the audio track) passes, it will disappear leaving space for new blocks. Starting from here, it will be necessary to drop the blocks quickly and in order to form others of the same color. The only actions available to us are the rotation of the "pieces" in order to align the same colors. The more combinations we create, the higher the score that will allow us to move on to the next skin up to the coveted level 100.

We find the synesthetic element in the manipulation of the blocks themselves. Our every action, every single interaction, will produce a sound that will modify the musical track of the level. A solution very similar on a conceptual level to that of Rez, here accentuated even more, almost to create remixes in real time of the songs.

Mizuguchi also proposes several new options related to vibration, which somehow comes close to the concept of his sensory suit developed for this type of experience..

Are you wondering how it all works? Just activate all available controllers and Joy-Con, "place" them where you want and once you start the game they will start vibrating to the beat of the music. The vibration is strong, noisy, almost as if to make the various peripherals “ring”, so from create a harmonization between the game on the screen and the surrounding environment. A very successful experiment, which further explores this mysterious territory called synesthesia.

Today like yesterday, this Lumines remastered appears almost immortal, recreating the same alchemy born on PSP in this version for Nintendo Switch. Lumines is a title that manages to snatch every single minute of your free time. And it gives its best once you put on the headphones and turn the volume to the maximum to enjoy its ost.

An eclectic, schizophrenic selection of songs, so "powerful" as to stun the player and confuse him in passing the level. The tracks will offer a different bpm from each other, and the transition to a new skin in the first games will be exhausting at times and the player will have to adapt to the new imposed rhythms. Here sound and images collaborate and while traveling on a stylistic simplicity that borders on minimalism, style exudes from all pores. The colors turn sour, they become so saturated that they imprint themselves in the retinas, with combinations of shades “so” wild that it is difficult to understand where to create new blocks.

Lumines is patience and perseverance.

You can play simply for the pleasure of it, but once you get to the last skin and receive our evaluation, the desire to start again in search of the perfect score will be triggered.
The absence of an online leaderboard is perhaps one of the biggest limitations of this remastered. The impossibility of comparing one's results, even only with friends, is an obstacle to self-improvement and a brake on fun, which becomes an end in itself.

In addition to the single player mode, available in some difficulty variants, including the "infinite" one, we also find other game options. In particular Time Challenge, Puzzle and Mission, which enhance the puzzle game aspect of Lumines.

The first is a time Attack in which to eliminate the greatest number of squares within the time limit. In Puzzle we will have to exploit the combinations of the blocks instead we will have to recreate the required images within a time limit. And if the figures of the first stages will be basic, as we complete the requests the level of challenge will increase. The same applies to the Mission mode, in which we will be confronted with some scenarios, which must be completed respecting the requirements. Even in this case, things will get complicated by accessing the more advanced missions.

Lumines also offers a 2-player mode. Unfortunately, as well as for the leaderboard, the lack of online functionality it is somehow a gap that, in 2018, necessarily had to be filled. Leaving aside these problems, the multiplayer mode integrates perfectly into the dynamics of Lumines. Here the 2 challengers will share the same playing area. As the blocks are cleared, the portion of the player in difficulty will shrink, making it more difficult to create combos and risking the overcrowding of the blocks themselves. The game will end when one of the two players runs out of space.

Verdict 8.5 / 10 The Tetris of the new millennium Comment 13 years and not feel them in the slightest. This indicates only one thing: the goodness of the gameplay created by Tetsuya Mizuguchi that belongs only to the immortal and timeless games. Lumines Remastered in its stylistic simplicity is a title from which it is impossible to break away. In this Switch version, more than ever, the same magic of a decade ago is recreated thanks to the portability that allows you to fully enjoy it anywhere. In the restoration work, however, there is a lack of any online functionality, whether it is a trivial ranking or the possibility of challenging players from all over the world. For the rest, the introductory price, just under 15 euros, is a valid invitation to buy one of the most successful puzzle games ever and make yours a piece of history of modern game design. Pros and cons ✓ Fresh gameplay despite the years
✓ Explosive soundtrack
✓ High-level aesthetic minimalism
✓ Great introductory price x No online features
Do you want to be a video game expert and know all the tricks, guides and reviews for your video games ? Holygamerz.com is a group of video game fanatics who want to inform you about the best tricks, guides and tips. We offer you the best information to be a reference in gaming, so here you can find guides, tricks, secrets and tips so you can enjoy your games to the fullest. Are you ready to get all the achievements of that game that you resist so much? Enter now and enjoy your favorite video game to the fullest!
News Game over for Mobius Final Fantasy ❯